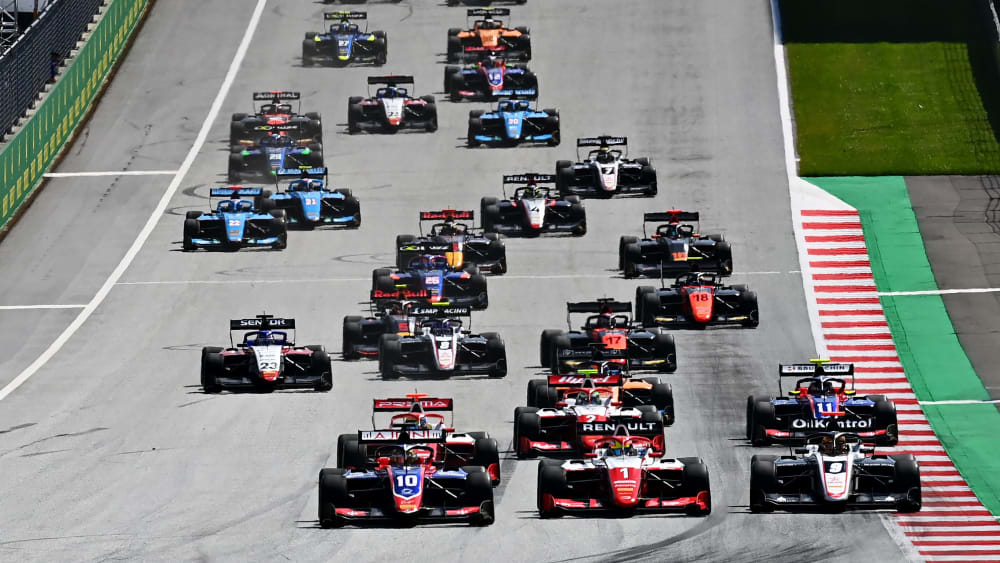 He wears the #1 on his red and white Prema Racing Dallara and Oscar Piastri now holds the number 1 position in the fight the 2020 Formula 3 Championship.

Piastri made excellent progress at the start of the opening race for the 2020 season and looked to move in-between pole sitter Sebastian Fernandez and Lirim Zendeli at the first turn. Fernandez failed to see Piastri at the entry to the first corner and swept across the Prema car. Fernandez’s rear wheel caught the front of Piastri and sent the pole sitter briefly into the air before crashing to the ground and spinning onto the asphalt run-off area.

The 𝘸𝘪𝘯𝘯𝘪𝘯𝘨 moment 🏆💯@OscarPiastri had a perfect #F3 debut to take an early lead in the championship ✨#AustrianGP 🇦🇹 #RoadToF1 pic.twitter.com/UEeBIbop2a

Zendeli had taken the inside line and grabbed the lead from Piastri. Logan Sargeant held third while Alex Peroni had made a superb start to follow Zendeli up the inside and into fourth from eighth on the grid. Piastri took the lead with a move around the outside of Zendeli at turn 3 and capitalised on the German’s caution under brakes to drive away from the field.

Piastri quickly moved away to a comfortable lead as Sargeant looked to pass Zendeli while defending from Peroni. Sargent eventually made it a Prema 1-2 when Zendeli washed off too much speed on the approach to a corner and the American pounced. That compromised Zendeli’s exit speed and Peroni was past in a flash. 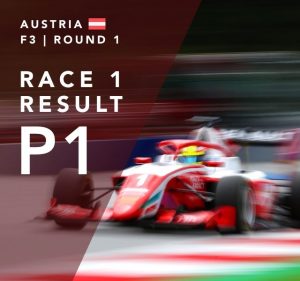 That set the scene for the remainder of the race. Sargent tried to reduce the gap to Piastri who had set the fastest lap as he stretched the lead to 3 seconds, while Peroni looked to manage his tyres as he sat under the rear wing of Sargent’s car.

Alex Peroni soon found himself in a Prema Racing sandwich when Frederik Vesti passed Zendeli and honed in on the back of the bright orange and blue Campos car in third. Peroni made several half moves on Sargent while making sure that he didn’t try a move that would leave him exposed to Vesti. The gap to Sargent and Vest fluctuated between a half to three quarters of a second for the remainder of the 24 lap race.

Logan Sargant closed the gap to just over a second between himself and race leader Piastri as the top five battled tyre degradation in the closing stages of the race, however the order remained unchanged.

Oscar Piastri scored the win on debut in the category from Logan Sargant and Alex Peroni. For Peroni it was a remarkable comeback from his high speed accident at Monza last year. It was also an excellent result for Campos, as the team’s other drivers languished near the rear of the field.

Fellow Australian drivers Jack Doohan and Calan Williams finished towards the middle of the pack.

“Winning the first race is a great start to the year,” Oscar Piastri exclaimed. “It was very scary at Turn 1 at the start and I thought that it was going to be race over 10 seconds into my debut, but thankfully I got through that and made a good move on Lirim into turn 3.

“Then, I just controlled it from there. The tyre deg was a bit more than we were expecting and halfway into the race I was struggling a bit with the rears. Logan was catching me and bringing the train with him, so I had to stay on my toes.

I couldn’t have started the year any better really and hopefully we can make up a few spots in the reverse grid tomorrow.” 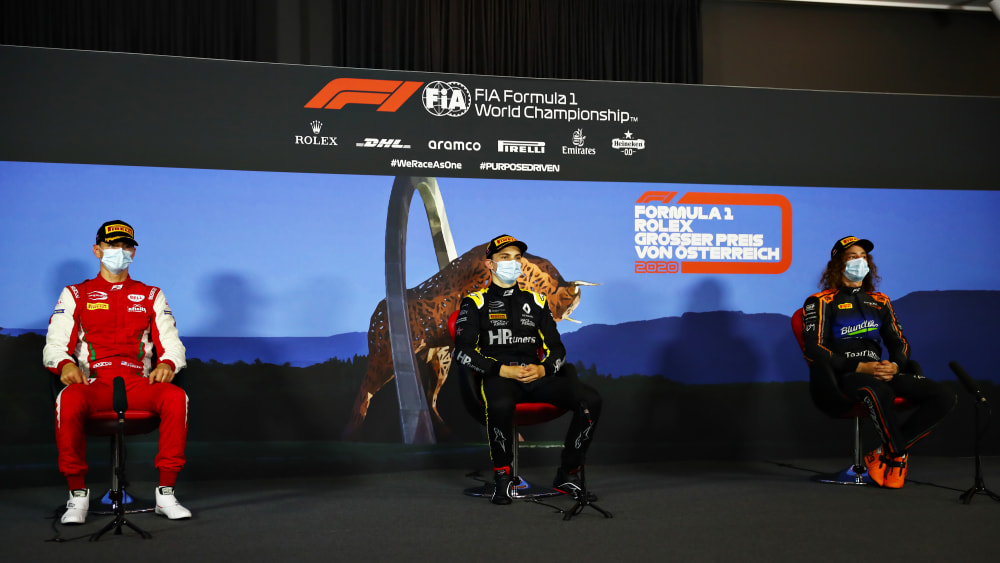 Thoughts from Piastri, Sargeant and Peroni

FIA Formula 3: Hello and welcome to the press conference with the top three finishers in Race 1 of the FIA Formula 3 Championship here in Austria. We are joined by race winner Oscar Piastri for PREMA Racing, in second place is Logan Sargeant also for PREMA Racing, and third is Alexander Peroni for Campos Racing. Oscar, a win on your debut in this category but it looked like it has almost ended at Turn 1. Just talk us through that first lap.

Oscar Piastri: It was pretty hairy at the first corner. I got a really good start compared to Fernandez and Zendeli, and I went to the left. Fernandez was on the left of me and he out-broke all of us and tried to sweep around the outside but didn’t really leave enough space. I just got wedged in the middle really. It was unfortunate for his race to end like that but there was nothing that I could really do.

FIA Formula 3: You did well to then take the lead and build up quite a big gap. It fluctuated a bit in the middle of the race. Were you just managing the gap or were you coming under a bit of pressure?

Oscar: At the beginning I was pushing as hard as I could to try and get out of the DRS range, and then the deg was a little bit higher than I was expecting to be honest. The mid-part of the race was really about getting the tyres back under control in case there was a late safety car or a surge from these guys behind. There were a few laps where it was very sketchy through the high-speed stuff, but it was just managing it a little bit and trying to find the best compromise with the tyres that I had.

FIA Formula 3: Congratulations, well done today. Logan, moving on to you. A PREMA one-two and your first podium, how pleased are you with this result?

Logan Sargeant: First of all, I want to thank PREMA. They’ve done an outstanding job all weekend. The car was really good yesterday in qualifying and then I was definitely able to work with it today, so a big thank you to them. I’m really happy. Obviously, I want to be first, but we’ll have to keep working hard and get there at a later date.

FIA Formula 3: You had Oscar in sight for much of that race, and as I mentioned the gap did come down at certain times. Did you feel like you could get there or were you also feeling the pressure from behind as well?

Logan: I knew it was going to be really difficult having no DRS. I was catching him a little bit. We were both really quick, so it was tough. Especially because I had a train behind me. I was the first car with no DRS. It was really important to make no mistakes. I couldn’t over-push, I just had to stay within my limits.

FIA Formula 3: Well done today. Alex, moving on to you. It’s also your first podium in Formula 3, and I guess sealed by that great move around the outside of Lirim Zendeli at Turn 4. Talk us through that one.

Alex Peroni: Yeah! He didn’t have DRS and I think Logan and I did have it coming out of Turn 3. I was pretty sure Logan could have gone around the outside, and I thought Lirim was going to get pinched on the inside because he didn’t have the opportunity to retake Logan. I thought, ‘I think I can get the momentum around the outside’, and I went around. He was sporting and gave me space. It was a pretty decent move.

Alex: It was weird. For some reason we didn’t have DRS out of Turn 1, which is the biggest zone and the biggest passing opportunity into Turn 3. At the start I could see that Logan had good pace, and there was a lot of people behind. At first I was hoping that we could break away, which we did actually, and then towards the end I started to try and catch him. There was a bit more tyre deg than we expected to be honest, so at the end to try and push was pretty difficult. Honestly, P3 from eighth is good. We’re happy with that for sure.

FIA Formula 3: Good job today. Back to you Oscar. You must have been dreaming of getting back to racing just like everyone else was, but could you have dreamt that it was going to go as well as it has so far this weekend?

Oscar: I thought it definitely had the potential to. Obviously, last year wasn’t a bad year for me at all, and I’m in arguably the best car on the grid. No pressure! It was set up to try and aim really high. Coming back on top is a dream start to the season, but to be honest I’m just glad that we’re all back racing and doing what we love most. 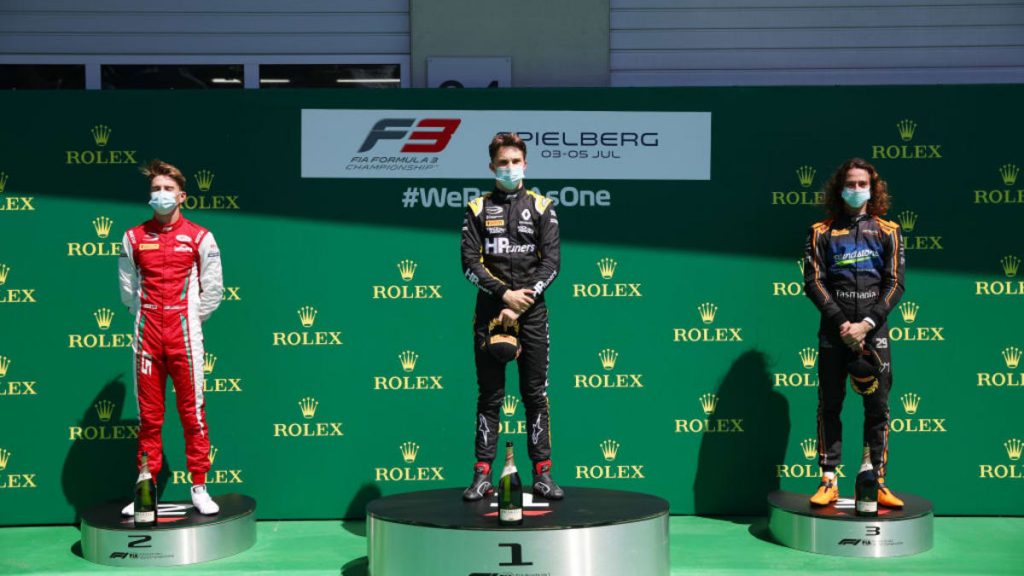