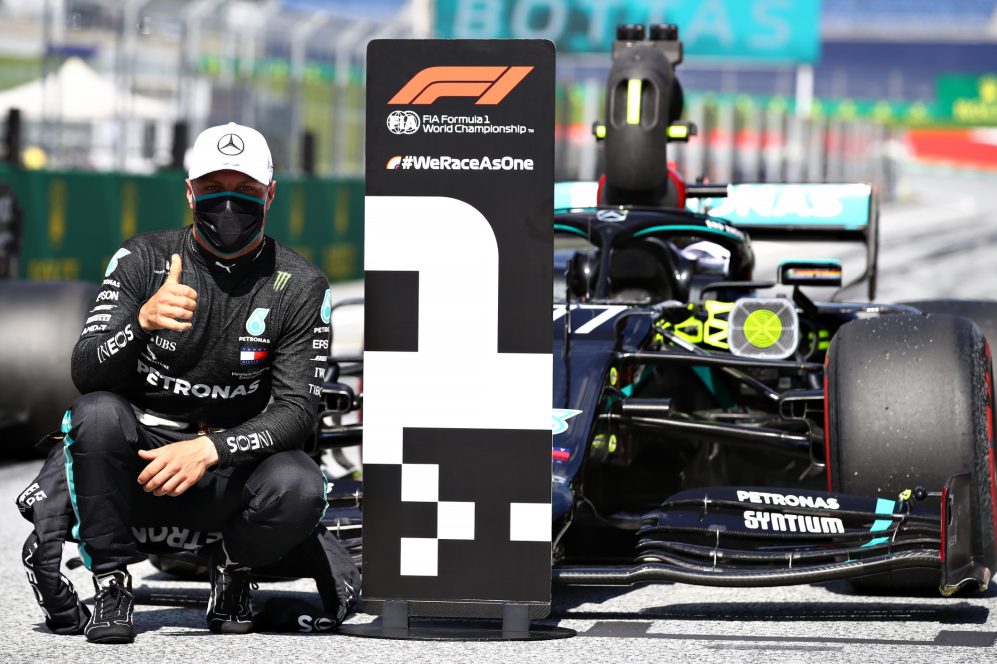 Mercedes continued their vice-like grip on the Austrian Grand Prix weekend, with an emphatic one-two finish in qualifying as Valtteri Bottas escaped an off-track excursion to beat team mate Lewis Hamilton to take the first pole position of 2020.

Formula 1 has been in a holding pattern as the coronavirus pandemic struck the world, but after nearly four months, the cars finally hit the track – and it was Mercedes, running a black livery in a stand against racism – who continued their rampant form in F1 who seized the advantage.

Bottas set an early marker with a new track record, pipping Hamilton after the opening salvos. The Finn looked immense in the first sector on the second run, but threw it all away as he lost control of the car and bounced across the track before re-joining.

That opened the door for Hamilton to take advantage, the Briton running last on track, and while he did improve on his first effort, he couldn’t quite make the difference, finishing 0.012s off Bottas’ pace.

Max Verstappen, winner of the last two Austrian Grands Prix, was third, albeit it nearly half a second off the pace, but the Red Bull driver will fancy his chances of spoiling the Mercedes party on Sunday, given he’ll be starting on the more durable medium tyre with everyone else in the top 10 on the softs.

Lando Norris was a brilliant fourth, the McLaren driver recovering from an error on his first run which forced him to back off to put everything together when it mattered in the second runs, edging out Alexander Albon by just 0.024s.

Racing Point had looked strong on Friday, with Sergio Perez confirming that encouraging pace with sixth and his team mate Lance Stroll ninth. There was not so good news for Ferrari, though, with Charles Leclerc a disappointing seventh, having just scraped through to Q3 in 10th.

His team mate Sebastian Vettel didn’t even manage that, the German getting the boot in Q2 – he’ll start Sunday’s race from 11th, albeit as the leading driver with free tyre choice.

Carlos Sainz was eighth for McLaren, with Daniel Ricciardo making sure Renault had at least one car in Q3 as the Australian completed the top 10.

So it’s advantage Mercedes heading into race day, with Verstappen lurking in the position he managed to convert into victory this time last year. The scene is set.

Verstappen hooked up his Red Bull nicely early doors to go quickest after the first runs, as Hamilton ran wide at Turn 10 and was forced into doing a second run, which popped him up to second.

Second time around, Verstappen went one step better, improving on his earlier best – after Stroll briefly went top of the pops – with Bottas beating his more decorated team mate, slotting in just under a tenth clear of the Briton.

Only Albon opted against a second run, the Thai driver easily progressing in 12th, allowing him to take an extra set of soft tyres into the remainder of qualifying.

Down the other end, there was misery for Alfa Romeo’s Antonio Giovinazzi and Kimi Raikkonen as they couldn’t escape the drop zone, the duo outqualified by a brilliant George Russell in the Williams, who was inside the top 15 after the first runs, only to get bumped down to 17th, 0.073s from the cut-off, which nonetheless was an impressive result.

Red Bull rolled the dice with Verstappen in the first runs, bolting a set of the medium tyres while everyone else went straight for the softs in a bid to offset his strategy for Sunday’s Grand Prix.

His first run wasn’t too good, but he improved on his second to go sixth quickest, three tenths above the cut-off. His team mate Albon made an error on his first run, but fortunately, he had an extra set of tyres to go again – doing enough to go through in third.

Up front, Hamilton was the quickest on the first runs, but he was usurped by his team mate Bottas on the seconds, the Silver Arrows in a league of their own as they comfortably occupied the top two spots in the rankings.

Norris was impressive, too, the McLaren driver going fourth quickest, ahead of the impressive Racing Point duo and his more experienced team mate Sainz.

There was bad news for Ferrari, though, Leclerc just scraped through in 10th, but a scrappy final lap from Vettel meant he wasn’t so lucky, the German ending up 11th to force him out of qualifying. It was super close, though, with just four tenths splitting fourth and 11th.

It was advantage Bottas after the first runs, the Finn beating Hamilton, ahead of the two Red Bulls of Verstappen and Albon, as Stroll and Ricciardo opted for just one run.

After the first runs, the eight boxed for new boots and splash of fuel, with the two Mercedes the last two rejoin the fray. Bottas seemed to have his Mercedes hooked up perfectly as he nailed the opening sequence of corners, only to run wide at Turn 4 and bounce across the gravel.

Hamilton will have seen his team mate run off track, and kept his head down, setting a couple of purple mini-sectors in the middle loop, but he couldn’t find enough time in the first sector to usurp his team mate.

This was Mercedes’ 65th front row lock out, tying Ferrari’s all-time record, and their first since Silverstone almost exactly one year ago. Bottas, meanwhile, now has three poles in Austria, more than at any other venue. 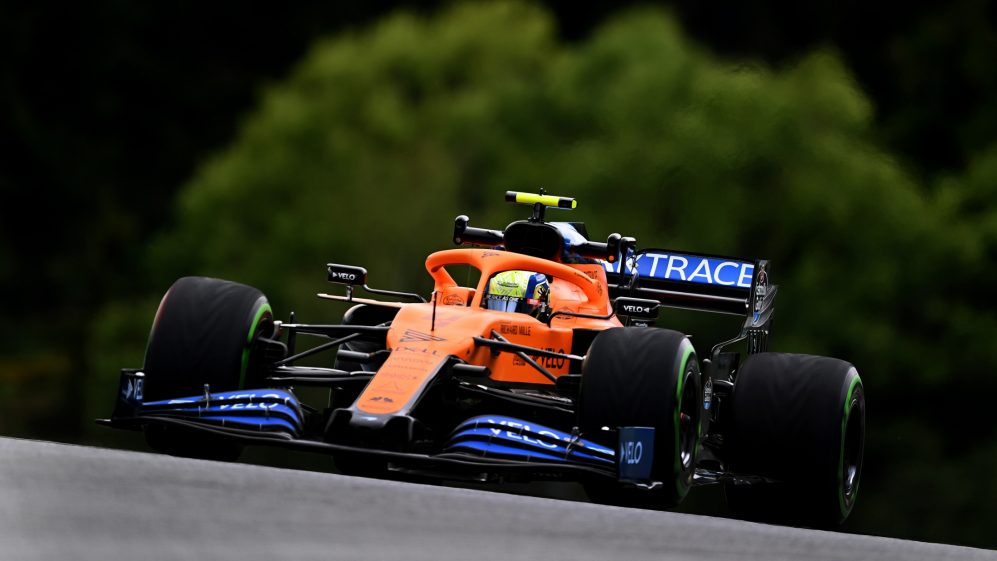 Norris was on the pace from Q2 and he delivered when it mattered once more in Q3 to secure a career-best fourth on the grid, while Albon and Perez clocked exactly the same time, Albon taking fifth by virtue of achieving the feat first.

Intriguingly, Leclerc took seventh with a time that was a massive 0.920s slower than he managed last year, when he took pole position in Austria.

Pole-sitter Valtteri Bottas: “I missed these feelings, you know, the qualifying shakes are something special when you push the car to the limit. Obviously, I’ve been preparing for this for a long time; it feels so good, I cannot say more than that. Our team has done an amazing job, we seem to be on our own league.”

SUBSCRIBE TO VELOCITY MAGAZINE For all our news keep your eyes peeled on the Velocity Magazine website and social media,Facebook, Twitter and Instagramfor our daily updates and to get the latest edition of our glossy magazine subscribe here from just $55 for 12 months subscription.GET OUR LATEST ISSUE NUMBER 36 HERE