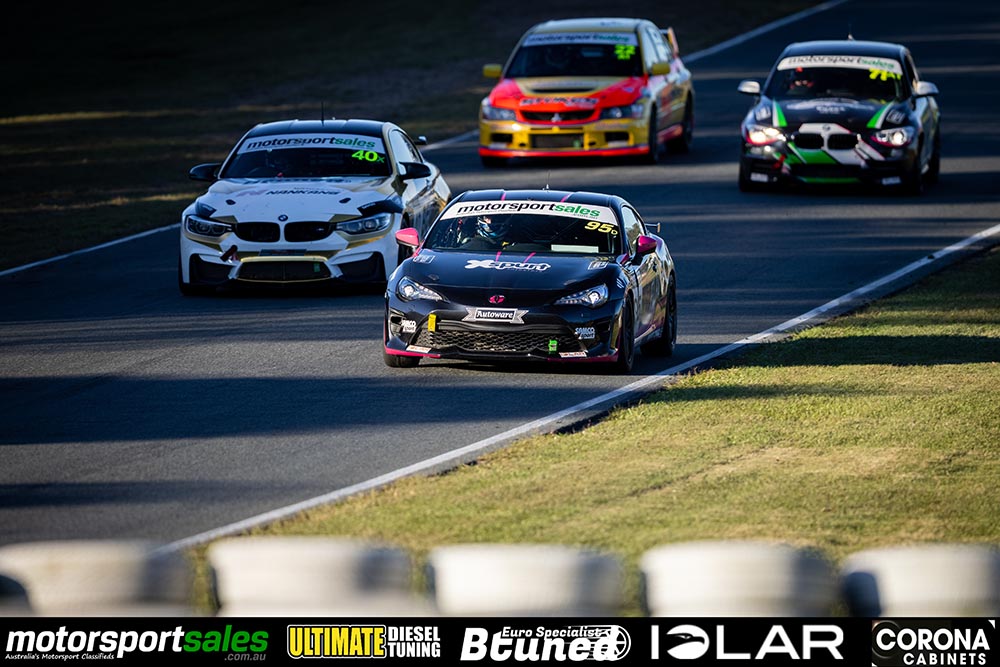 The second round of the 2021 Motorsport Sales Queensland Production Car Championship headed some 160km south-west of Brisbane to Morgan Park Raceway. The event comprised a one hour enduro on Saturday, with another one hour event scheduled for Sunday.

Bradley Carr took control of the opening race in Round 2 as mechanical issues and teething problems befell his closest challengers. Carr led away from pole position for the sixty minute mini-enduro with the Ford Mustang of Colbey and Lindsay Cowham close behind. Things soon began to heat up for the second placed team when an errant radiator hose caused Cowham to make an unscheduled pitstop and park the Mustang as boiling hot coolant hissed from the problematic hose. Turbo issues also sidelined the Mitsubishi Evo X of Robert Gooley and Maika Ter Horst.

Carr’s main challenge came from Ben Gersekowski. On debut in the championship with a new BMW M3 at his disposal Gersekowski had been planned the event as a low key introduction to the category, but soon became a realistic opportunity for a podium. A minor misjudgement during an unfamiliar pitstop sequence saw the KCK Lubricants/ Vic’s Timber BMW M3 drop out of contention.

“I qualified third, but unfortunately we’re still learning the processes with Production Cars and made a mistake in the pits. That probably cost us half a lap,” Ben Gersekowski said.

As dusk began to settle in the hills around Morgan Park, Bradley Carr took the chequered flag in first place, 26 seconds clear of the Class A2 Commodore of Richard and Jimmy Beggs. Third went to the BMW M3 of Christopher and Karl Begg a further 25 second back. Jake Camilleri was 1st in Class C and 9th outright, Mitchell Maddren won Class D in his Toyota 86, while Damien Drew and Lea Medhurst were successful in Class E.

“It was a good little battle off the line with the Mustang,” Bradley Carr told MTR Images. “Unfortunately it looks like they’ve had a radiator hose come off. Bit of a shame as he was tucked in behind me for a real battle. This might be how Beric (Lynton) feels, driving around at the front on his own!”

Bradley Carr made it two from two with a straightforward win in the second and final race of the weekend, while Ben Gerkowski had a trouble free run as he moved from 7th on the grid to 2nd at the finish. Paolo Buccini and Brock Paine took the final place on the podium a further 42 second behind in thier BMW 135i. Jake Camilleri finished first in Class C and 6th outright, while Mitchell Maddren won Class D and finished just one place behind the Mazda driver. Damien Drew and Lea Medhurst were victorious once more in Class E.

The race was run much earlier in the day, with track conditions taking their toll on cars throughout the one hour event as evident in the slower lap times. The leaders completed one less lap in the allotted race time and the fastest time was almost a second slower than Saturday’s event. The race claimed a number of entries, including the Ford Mustang of Lindsay and Coleby Cowham. The team had repaired the radiator hose from Race 1 but the car lasted a little over 17 minutes of the race before it was packed away. The Begg BMW M3 also retired after 6 minutes, while the Gooley and Ter Horst Mitsubishi Evo X was a non-starter.

“Not a bad first weekend in the new car for a State round,” Bradley Carr exclaimed. “Really happy but obviously didn’t have a lot of competition.”

Second place for Ben Gerkowski was most unexpected but gave the fledgling team confidence for the rest of the season.

“Started 7th, finished 2nd.. To get an actual podium is unreal,” Ben said. 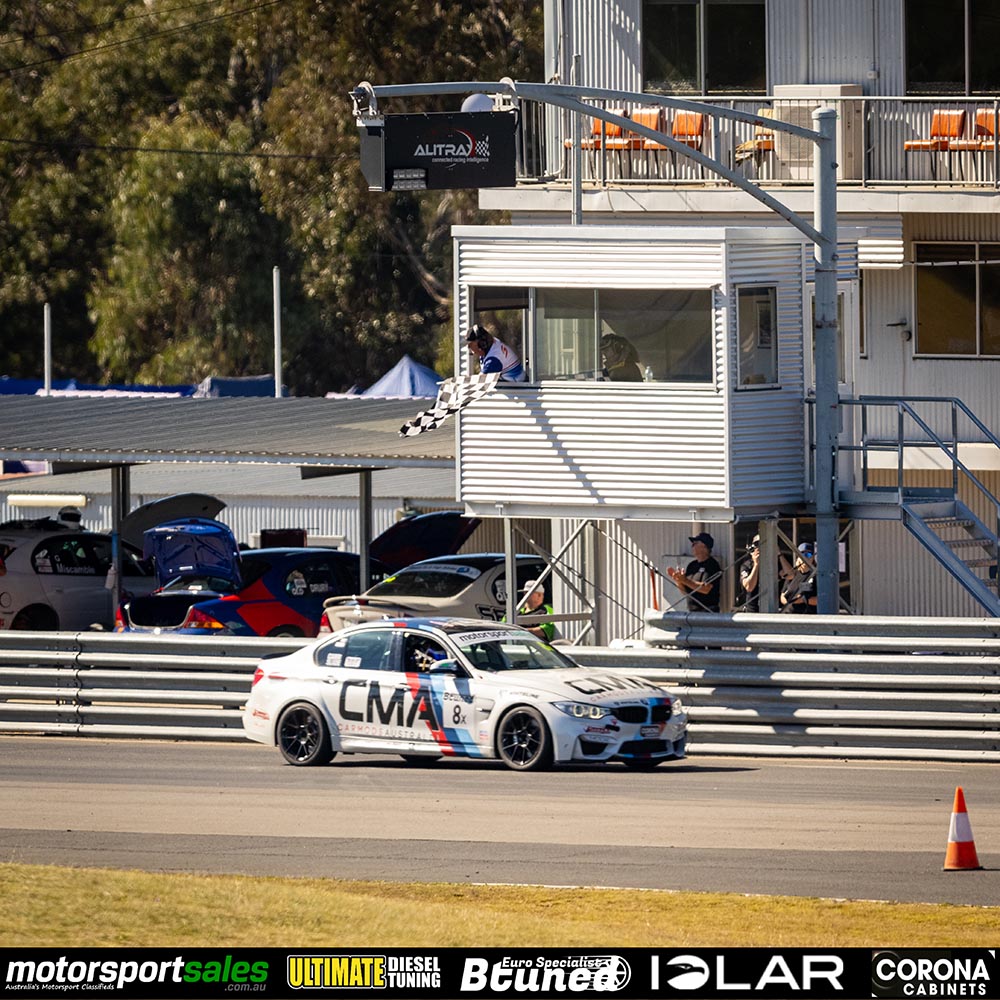 The Queensland Production Car Championship headed just north of Brisbane to Lakeside Raceway for Round 3 of the 2021 season. The outright class was strengthened with the addition of Beric Lynton and Steven Ellery in their M3s in a 24 car field. Karl Begg grabbed pole position for the opening race from Coleby Cowham, Bradley Carr and Beric Lynton. It was a packed day of racing for the category with qualifying and a pair of one hour races all scheduled for the one day.

Begg led the field away from the rolling start and quickly established a 50 metre gap over Lynton, Cowham and Carr. That gap slowly disappeared as the combination of warm temperatures, close racing and relatively tight nature of the Lakeside Park circuit made tyre management a key issue.

It was an issue known all too well by Coleby Cowham, Lindsay Kearns and their crew. They managed the tyre life on their Ford Mustang perfectly to take the win some 4 seconds clear of Bradley Carr and Jason Miller another 20 seconds in arrears. Begg and Lynton had been the fastest on the track and were the only drivers to dip into the 57 second bracket, but ultimately those speeds came at a price.

Cowham made it a double with another win in the second and final race of the program. This time the Ford Mustang stormed away at the rolling start with Begg, Carr, Miller and Gersekowski in pursuit. Coleby etched out a solid lead, which proved to be the difference when the Mustang made the compulsory stop and handed the car over to Lindsay Kearns for the run home.

After a solid, return to the series in Race 1, Lynton was on a charge in the second and set after the leader. A mistake at the end of the pit straight ultimately denied the 2021 Bathurst 6 Hour runner-up any chance for the win.

“I was chasing hard and they were managing Tyres, but my off at the end of the main straight behind Carr cost me 8+ seconds”, Beric Lynton said.

Tyre issues became a major factor during the final stages of the race as Carr and Begg were among a number of teams that had lap times blow out. Carr dropped down to 9th at the finish, while Begg was amongst three retirements, with his race ending at the 50 minute mark. Chris Begg and Jason Simes were the other retirements. Simes had returned after a dnf in Rae 1, but lasted barely 3 laps before his day was over. Steven Ellery and John McCleverty did not make the grid for Race 2.

Kearns brought the Cowham Mustang home in 1st place from Lynton and Gersekowski.

“Coleby’s performance in both races gave us just enough margin at the start,” Lindsay Kearns explained. “It was just great to get in the car at the pitstop and then get told that we were first.”

“Awesome weekend!” Coleby Cowham exclaimed. “Last year we won the first race and didn’t start the second, so this kind of finishes the job from 2020. We were. mindful of the tyres while still trying to go a little bit quicker, otherwise there we no issues for us.”