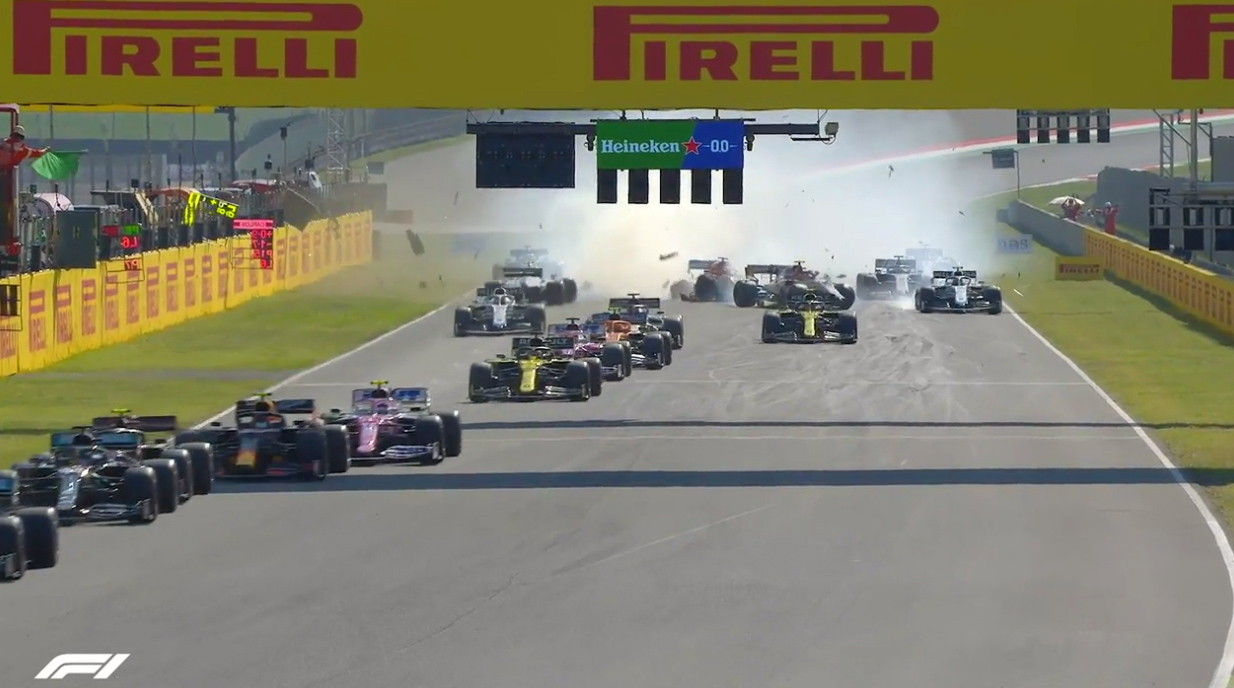 Lewis Hamilton climbed into the AMG Petronas Mercedes cars in their customary place on the front row of the grid in what was billed as a celebration of Ferrari’s 1000th Grand Prix. Leclerc’s and Vettel’s cars gleamed in the more maroon hues rather than the usual Maranello red, while a steady haze wafted from the left side pod of Verstappen’s car as mechanics looked to rectify a software related issue. The car was put back together with Red Bull confident that the problem had been resolved.

As the five red lights dimmed it was Valtteri Bottas who swooped around the outside for the lead into turn 1 from a fast starting Leclerc ahead of Albon. Verstappen was engulfed down the straight and dropped to 12th as the Red Bull struggled to get up to speed. Stroll and Sainz locked wheels on the run towards the Turn 2 Luco corner, which spun the McLaren 90 degrees just off the racing line. Sebastian Vettel made contact with the Orange and Blue McLaren as Sainz spun across the track, with the Ferrari limping away with damage to the front wing.

Watch the Highlights package, further down.

Max Verstappen was another victim at Luco after copping a hefty whack in the rear from the Alfa Romeo of Kimi Raikkonen. The Haas of Romain Grosjean had attempted a move around the outside of Raikkonen at the same time that Pierre Gasly tried to pass between the pair. Gasly cannoned into the rear of Raikkonen and was pitched into the air, the Alfa Romeo then slammed into the back of Verstappen while Grosjean spun sideways through the gravel and into the tyre wall near Gasly’s Alpha Tauri. The Haas somehow managed to extricate itself, though the Red Bull and Alpha Tauri were well and truly stuck as the Safety Car was dispatched.

“Already on the formation lap it stalled,” Verstappen told Sky Sports.“I made a good start, got around Lewis and then it wouldn’t accelerate. When asked about the subsequent accident Verstappen said, “That didn’t matter. When you get into that situation I was probably going to retire anyway.”

Bottas led behind the Safety Car from Hamilton, Leclerc, Albon, Stroll and Ricciardo, though the Racing Point’s position was under a cloud after the incident with Sainz. Perez, Norris, Kvyat and Ocon rounded out the first ten runners.

The race finally resumed on lap 7 for a matter of seconds before the race was neutralised once more. Bottas had backed up the field and began weaving across the track to generate heat in his tyres and then accelerated just before the control line to head Hamilton and Leclerc. Further down the field there was a tremendous plume of smoke as Magnussen, Sainz an Giovinazzi crashed heavily on the pit straight. The McLaren and Haas made heavy contact with the outside wall while Giovinazzi’s car was left a mangled wreck on the track near the start/finish line with wheels missing and a trail of carbon fibre debris back towards the final corner.

A second Safety Car period commenced as the field were ushered through the pitlane as rescue crews recovered the damaged cars and moved the potentially damaging carbon fibre shards from the circuit proper.

Romain Grosjean was furious with the actions of Bottas at the restart. “That was stupid from whoever was at the front,” Grosjean fumed over the radio. “They want to kill us or what? This it the worst thing I’ve ever seen,” he added.

In car replays showed just how horrific the restart had been. Whilst the field speed away at the green flag, Kevin Magnussen continued to crawl down the straight. Giovinazzi and Sainz were some distance back and had accelerated quickly. Nicholas Latifi was the first to close on the Haas and swerved voiolently at the last second to avoid contact. Giovinazzi was unsighted by the move and locked his wheels to no avail. He still ploughed into the Haas with frightening force, while Sainz then hit the rear of the Alfa Romeo, which was launched high above the McLaren and down onto the hapless Latifi. Grosjean had seen the events unfold in front of him and was fortunate to avoid both the Haas and McLaren as they speared into the wall just metres ahead.

“Oh my God, that’s dangerous,” Sainz said to his engineer in the moments after the crash as they asked if he was okay. “Im okay and I think that everyone is okay,” Sainz later told Sky Sports when asked about his hand injury. “That’s the main thing because the crash was very scary. We were doing 290-300kph at that point everyone in front of me thought we were racing and suddenly it looked like we were not racing anymore and everyone started braking again. By the time I saw everything it was just too late and it was a big crash.”

The race was then red-flagged as officials began the lengthy task of clearing the damage cars and debris from the track. Esteban Ocon became another retirement in the pitlane during the red flag period when a rear brake  overheating problem was investigated by the Renault team.

Bottas eventually led the field back to the pit straight for a second start to the race with teammate Hamilton alongside with smoke rising from his front brakes while he sat on the grid. Hamilton repeated Bottas’ move from the first race start and swept around the outside of turn 1 to take the lead with Leclerc, Stroll, Perez and Ricciardo leaving Albon in their wake in the drastically reduced 13 car field. Ricciardo looked to pass Perez on lap 10 but had to wait another 6 laps before he was finally able to move up into 5th place.

Mercedes had played an ace during the red flag and switched both drivers to the alternate medium compound tyre, while the remainder of the top 10 changed to a second set of set tyres. The pair drove away from 3rd placed Leclerc safe in the knowledge that they could choose either compound of tyre for the final portion of the race, whilst those behind would be forced to choose the medium tyre.

Stroll had been shadowing Leclerc’s Ferrari from the restart and moved into 3rd with a clean pass at turn 1 on lap 18. The Racing Point sat 9.2 seconds behind 2nd placed Bottas as Ricciardo looked to close on 4th place, which he took a lap later. Leclerc’s early charge had faltered as he steadily dropped back to 7th y lap 21.

Daniel Ricciardo clawed away at the gap to 3rd placed Stroll and moved into DRS range just before half race distance. For Renault Sport Racing Managing Director, Cyril Abiteboul, the prospect of a podium must have brought mixed feelings. Whilst marking a steady improvement in race performance a podium for Ricciardo would result in a tattoo for Abiteboul of the Australian’s choice as part of a bet between the pair.

The Renault driver stopped for tyres on lap 28 of 59, while Norris displaced Perez from 5th. Hamilton continued to push out his lead to 2.54 seconds, while Both endured a lonely race some 15 seconds up the road from Stroll. Bottas lost more ground at an alarming rate and soon radioed to the team that; “The left front tyre is finished. Vibrations are really bad.” He was told almost instantly to box as the end of lap 31.

Hamilton did not have the same problem and replied “The tyres are fine,” when he was told to stop. His engineer somewhat concerned by a possible undercut from Bottas. The assumption was correct as Ricciardo used that very Strategy to leapfrog Stroll into 4th place. Both AMG Petronas Mercedes cars returned to the track in 1st and 2nd on the white hard compound tyres. Ricciardo then moved up to 3rd when Albon finally made his stop for fresh rubber.

The focus during the final stanza of the race centred on the fight for the third and final place on the podium, with Daniel Ricciardo just managing to keep Stroll out of DRS range, while the Racing Point drivers faced a similar challenge to hold off Albon in 5th. Stroll’s challenge came to an abrupt halt at the Arrabiata 2 corner on lap 43, when he lost control of the Racing Point, bounced through the gravel and made heavy contact with the tyre wall. “I got a puncture,” Stroll explained to his team.

The Safety Car made a third appearance, which Bottas used without hesitation, to change to a ew set of medium tyres while Hamilton stayed out on track. Those behind the leading Mercedes had all moved back to the soft tyre for what laps remained once the Safety Car exited the circuit. The race was then red flagged for a second time with significant damage to the tyre wall as Stroll’s wrecked race was lifted away.

After a lengthy delay the cars rolled out behind the Safety Car then lined up on the grid for a third race start with 13 laps still to run. Hamilton once again took the lead off the line while Ricciardo managed to split the Mercedes duo into the first turn. Ricciardo held 2nd place for just over a lap until Bottas simply drove past the yellow Renault down the pit straight on lap 48.

WATCH THE MAYHEM UNFOLD IN THE HIGHLIGHTS PACKAGE HERE

Ricciardo’s podium hopes came under threat as Albon closed and DRS became enabled. Ricciardo stretched the gap to just under a second on lap 50 as he looked to keep the Aston Martin Red Bull at bay. The DRS zone on lap 51 provided Albon with the advantage and he swept passed Ricciardo for 3rd.

Lewis Hamilton went on to take another win from Bottas, while Albon scored his first F1 podium in 3rd. Daniel Ricciardo was disappointed to finish in 4th, from Perez, Norris, Kvyat, Raikkonen, Leclerc and Vettel. A post race time penalty dropped Raikkonen to 9th, while George Russell just missed out on a points finish in the Williams.

“Thanks for sticking with me,” Albon radioed to his team on the cool down lap. He became the first Red Bull driver to finish on the podium ahead of Verstappen since Daniel Ricciardo at Monaco in 2018. 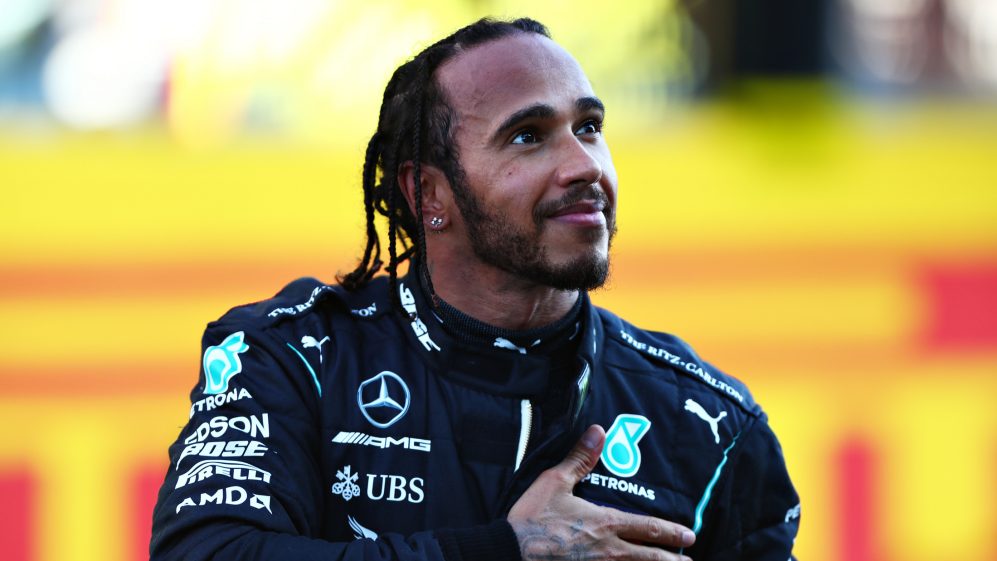 “It was all a bit of a daze, like three races in one,” Hamilton told Sky Sports. “Just incredibly tough today. That track is phenomenal and obviously the heat. Keeping Valtteri was behind, who was quick all weekend was not easy and I was behind him at the beginning. All those restarts where total focus was needed at that time, it was all really, really hard. The first stint with those tyres was fine, but they wanted me to stop because Valtteri had a problem. My heart’s definitely racing and it’s crazy to be here and have 90 Grand prix wins.”