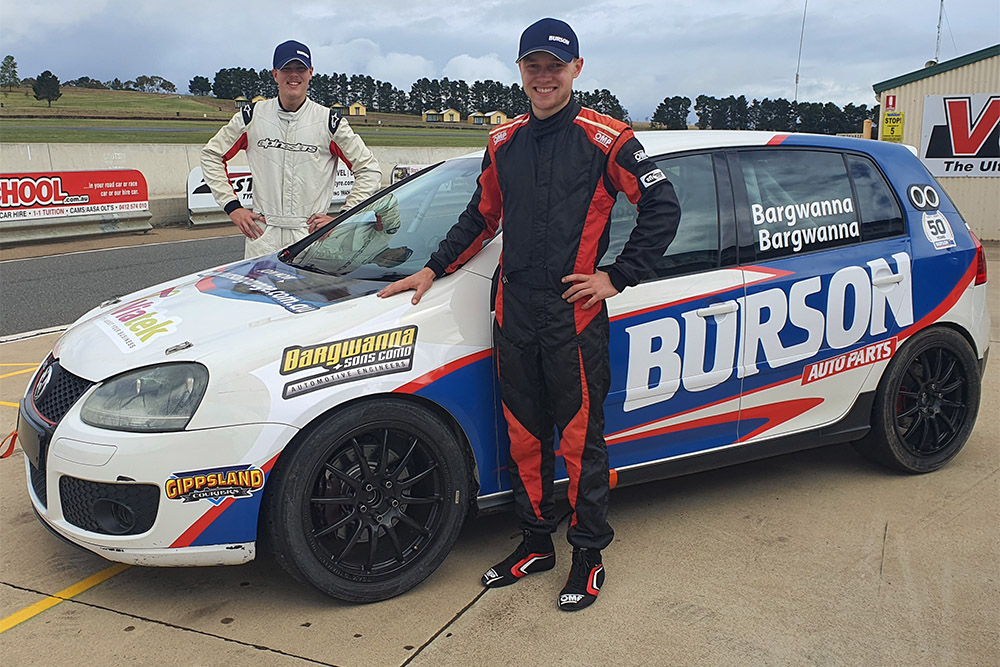 Bathurst has been a very special place for the Bargwanna family, enjoying success at the hallowed 6.2km racing circuit in various motorsport events and categories across three family generations.

The Bargwanna Bathurst story starts with family patriarchs Harry and Alf, the fathers of Jason and his cousin Scott, who first competed in the late 60’s. The second family generation cousins, Jason and Scott, both 20 year olds, teamed up in a small family run team to join the elite group of Bathurst winners by taking out the Class C victory at the 1992 Bathurst 1000. This was the same epic race that ended prematurely due to major accident at the top of Conrod straight in abysmal weather conditions. The red flag that marked the end of that race handed the overall victory to Mark Skaife and Jim Richards (Nissan GTR) and the Bargwanna Cousins’ in their family prepared Toyota Corolla.

Both Jason and Scott Bargwanna progressed to enjoy successful racing careers, following in the footsteps of their fathers Harry and Alf, who still race to this day. Jason Bargwanna won Australia’s Great Race with GRM (his current TCR Australia Team) in 2000 with Scott Bargwanna taking the Class A2 victory in the 2017 Bathurst Six Hour.

Fast forward to 2021 and history is repeating itself, as this small family team enters this year’s Bathurst Six Hour Production Car classic with another Bargwanna / Bargwanna cousin driver pairing. The third family generation to take on the mountain are teenage cousins, Ben Bargwanna (19) and Jude Bargwanna (16). Ben, who is starring in his debut season of TCR Australia racing this year and his young cousin Jude, who is currently third in the National Formula Ford Championship, will compete in this year’s Bathurst Six Hour with the support of Australia’s most trusted supplier of tools, parts, equipment and accessories to the trade, Burson Auto Parts.

Ben and Jude will be driving the dual liveried Burson Auto Parts / Burson Garage VW Golf GTI in the ultra-competitive Class D category, overseen by first generation Bargwanna racers, Harry and Alf, along with second generation Bargwanna Bathurst Champion Jason and his cousin Scott, making this a major family effort to repeat history and gain the Class D silverware with this third generation of the Bargwanna motor racing dynasty.

According to Jason, “This is something very special – for Scott and I to have shared that result so many years ago and to be able to come back to Bathurst as a family is pretty cool.”

Scott says ”We have always had great success here at this special place, but I think I am more excited and a lot more nervous watching Jude roll out of the Bathurst pit lane for the first time at only 16.”

Ben Bargwanna will be on double duty for the Easter weekend, competing in his regular Burson Garage Peugeot 308 TCR car and the Burson Auto Parts Golf GTI in the Six Hour enduro. He is already a Bathurst winner, after taking out the inaugural Bathurst Hyundai Excel Challenge in 2018 at only 16 years of age.

“Jumping from left hand drive to right hand drive is going to be a fair challenge for the weekend, but I can’t wait to do my first real endurance race at Mount Panorama. I would love to emulate Dad and Scott’s success, even to the point we are racing as number 71, just as they did back in 1992,” Ben said.

The number 71 is also very apt for the team’s major sponsor, Burson Auto Parts, as the Australian company was founded in 1971 and is celebrating its 50th Anniversary in 2021.

Jude Bargwanna is currently in the middle of a successful Formula ford campaign and is placed third in the Australian National Formula Ford championship point score after an outstanding national debut only weeks ago at Sydney Motor Sport Park.

“I am as nervous as I am excited and I just can’t wait to get to Bathurst and have a go. Dad has had great success there and it means a lot to be able to race there with Ben and the whole family. I am sure between Dad, Jason and Ben I will be able to short track my learning curve, and genuinely believe we can get a solid result come Sunday afternoon,” the 16 year old stated.