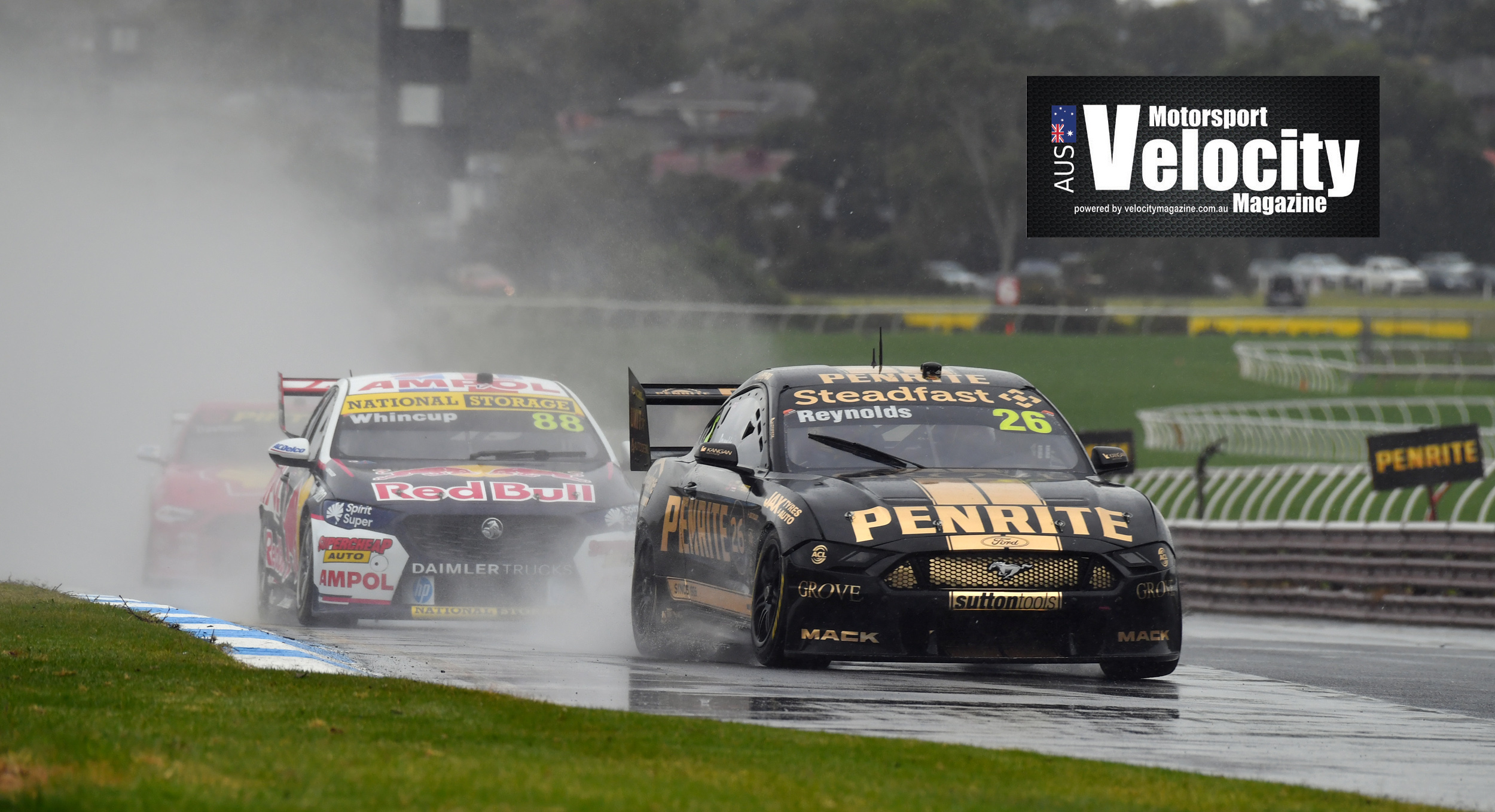 David Reynolds has capped off a successful Penrite Oil Sandown Super Sprint with a podium finish in his 350th Supercars race. The Penrite Oil Sandown Super Sprint continued today at Melbourne’s Sandown International Raceway and in classic Sandown fashion, the weather did a complete backflip on yesterday’s conditions, with rain having a significant impact on all of today’s running.

The morning kicked off with two extremely intense ten-minute qualifying sessions to establish the grid for this afternoon’s two 36 lap races. It began raining significantly 30 minutes prior to qualifying commencing and it quickly became obvious that qualifying was going to be ran purely on the Dunlop wet weather tyres.

In the first qualifying session both André Heimgartner and David Reynolds showed reasonably good pace. Once the tyres came up to temperature, André Heimgartner’s NED Whisky Mustang came alive and he was right on the pace and quick enough to qualify P5. In the first qualifying session Dave struggled a little more in his Penrite Mustang but was still able to string together a solid lap that was good enough for P9.

The Penrite Racing crew made some small changes ahead of the second qualifying session which made a big improvement. Dave qualified the #26 car in P4 for the final race of the weekend – Dave’s 350th race start. André continued to show strong pace in the wet conditions and qualified P5 once again.

SEE ALL OF OUR SANDOWN SUPERCARS PHOTOS HERE

In the first race of the day things got off to a shaky start as Dave got taken out and spun on lap one which caused significant damage to the rear left-hand suspension of the Penrite Mustang. The team called him into the pits to have it repaired and he re-joined the race a few laps down. Dave spent the remainder of the race feeling out the car ahead of the final race of the weekend.

André had a solid race in the NED Whisky Mustang – he was able to defend off the line and settle into P5. He lost a couple of positions towards the end of his initial stint but made them back up after the pit stop when the team ditched the wet tyres for slicks. André passed the chequered flag in P5.

In the final race of the weekend, David Reynolds started on the second row for his 350th Supercars race start. Dave got an excellent start in his Penrite Racing Mustang and passed Davison into turn one to claim P3. From there Dave fought his way past Whincup and moved up tp P2, but he had to drop back to P3 later in the race.

Dave drove a calm and collected race to finish P3 at the chequered flag, claiming his first podium with Kelly Grove Racing.

“The last race today was a little disappointing, we just didn’t have the pace to compete up the front and push forward. We’re going to have to look into why that was so we can improve for next time.”

”Overall it was a pretty positive day for the team, both cars were pretty competitive in both races and both were up the front throughout the weekend so it’s a really positive step for the team.”

”Hopefully we can make another step forward in Tasmania and i’m looking forward to it.”

“It was awesome today to get a podium in my 350th race at the Penrite Oil Sandown Super Sprint and do everyone at Penrite proud this weekend and bring home a trophy. It was shocking conditions, especially at the start, but I got a good start, moved up to P3 and then just kept my head down from there.”

”It’s a really solid improvement from where we were last round, we were competitive all weekend and the car was pretty good to drive, particularly today. The first race today was pretty disappointing because we got turned around and the car was damaged, which is a little annoying because the car would have been just as quick in that race.”

”We’re heading in the right direction as a team and I’m really proud of all the guys, it’s been an intense few weeks with a lot of changes to the cars but it’s started to pay off.”