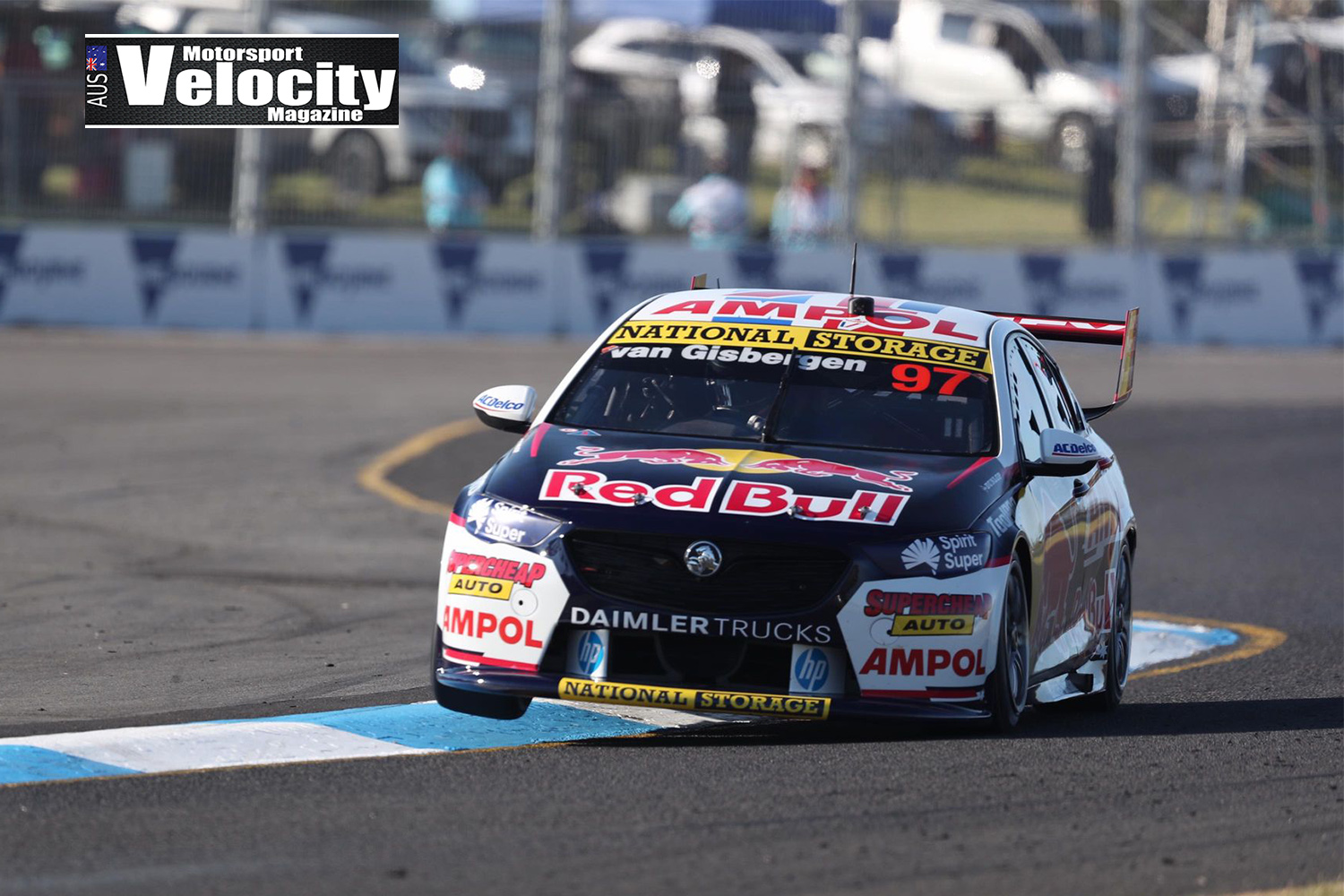 Shane van Gisbergen has been known for some great drives during his Supercar career, though few could compare with his exploits during the opening race of the 2021 Penrite Oils Sandown Supersprint.

Hampered by a recently broken left collarbone that had been surgically repaired with a metal plate, van Gisbergen astounded all by driving through the field from 17th on the grid to take the race win from Cameron Waters and Jamie Whincup.

Former teammates Chaz Mostert and Cameron Waters shared the front row of the grid for the first of three races at the 2021 Penrite Oils Sandown Supersprint, with Jamie Whincup and Mark Winterbottom immediately behind. Championship leader Shane van Gisbergen sat back in 17th, with question marks hanging over the Kiwi’s chances of completing the race with his injured left wing. 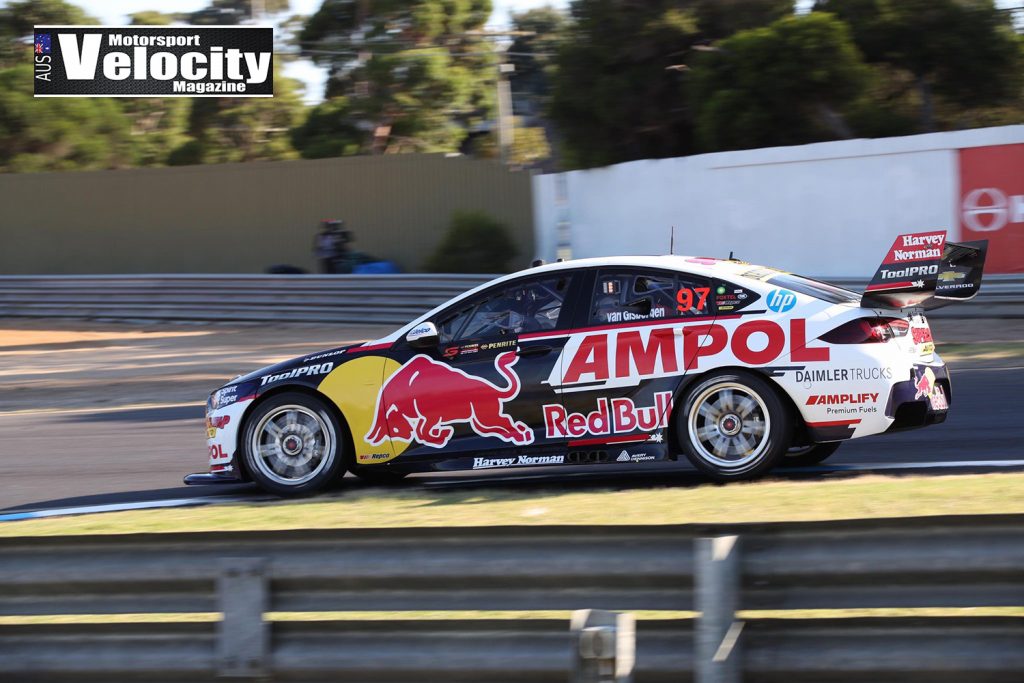 Mostert and Waters launched simultaneously as the lights went out, though it was Monster Energy Mustang that held the upper hand on the run towards turn 1. Mostert meanwhile was literally monstered back to 4th by Winterbottom to his right and Whincup to the left at the approach to the corner. Waters remained in font at the end of the lap from Winterbottom, Whincup, Mostert, Heimgartner, de Pasquale, Davison, Le Brocq, Courtney and Brown, while van Gisbergen had already gained four places to sit in 13th. Such was the congestion in the mid pack that the gap from 1st to 24th had already stretched to 9.4 seconds.

The race had barely entered its second lap of 36 when the Safety Car was despatched for Bryce Fullwood, who had found the tyre wall on the exit of turn 4. Fullwood eventually managed to drive back to the pits once extricated from the tyres and the race resumed on lap 7.

Mostert looked to gain from an undercut when he was amongst the first to stop for tyres at the start of lap 9 and returned to the circuit down in 20th position. The move looked to be a winning decision when Waters, Winterbottom and Whincup all made their compulsory pit stops around half distance. Mostert, who had returned to the track in clean air after his earlier stop, had more than matched the pace of Waters and consequently sailed past the trio as they lumbered under the speed limiter towards the exit of the pit lane.

Andrew Heimgartner held the race lead at the start of lap 20, but had not yet stopped, while Mostert sat in the effective race lead from Waters. A marginally quicker pit stop for Whincup saw the #88 Red Bull Ampol Racing Commodore leapfrog Winterbottom in the pit lane. The Team 18 Commodore then dropped another place to Anton de Pasquale as he brought the tyres back up to temperature. 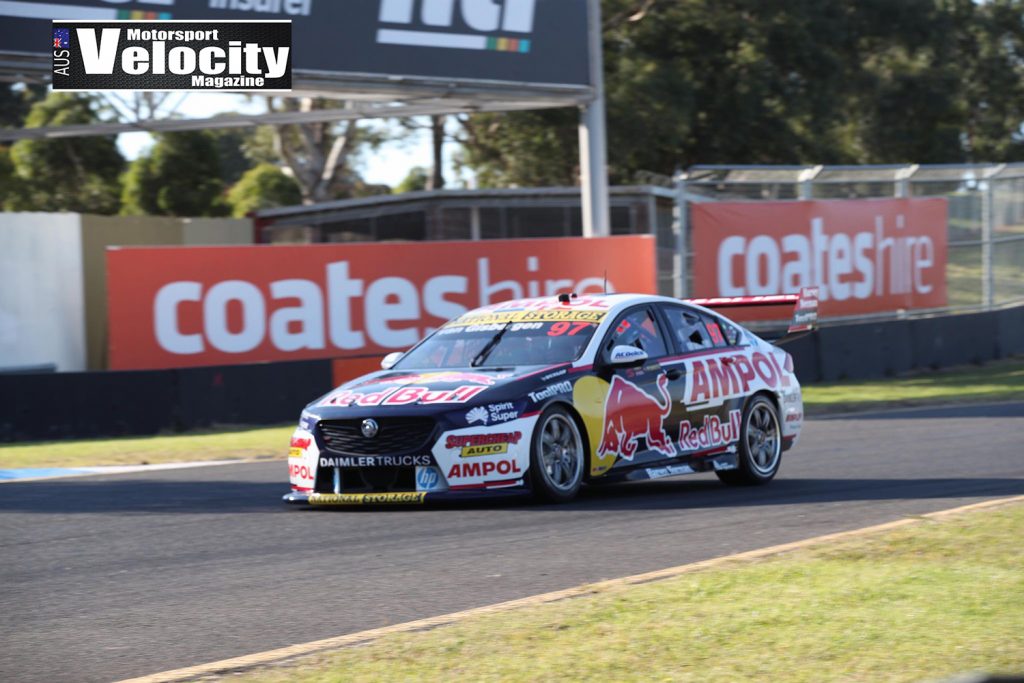 The #25 WAU Commodore had stretched out a 100 metre lead before Waters and Whincup began to make inroads on their fresher tyres. The gap between the top three had shrunk to less than a second by lap 30. The three drivers seemingly held a mortgage on the podium, with just the question of positioning to be decided. Pressure from Whincup on Waters enabled Mostert to pull out a small gap at the start of lap 31. Winterbottom seemed safely entrenched in 4th place until Shane van Gisbergen, who had been the last to make a scheduled stop, charged past with six laps left to run and defied the discomfort of his shoulder injury to close in on the race leaders.

Will Davison was amongst a six car train fighting over 7th place and dropped two positions when sent skywards at the exit of turn 3 after contact with Nick Percat. Further contact from Percat, this time with Heimgartner on the approach to the Esses, saw the Ned sponsored Mustang veer onto the bitumen run-off area as Heimgartner fought to control his Ford Mustang.

Cameron Waters closed in on the race lead once more and made several half passes on Mostert before finally taking the lead under brakes at turn 1 on lap 34. Mostert’s tyres were clearly losing grip as Whincup loomed alongside at turn 1 and then made side-to-side contact on the approach to turn 2. Shane van Gisbergen caught both drivers unaware on the inside and slid into 2nd place at the approach to turn 3. Mostert was then demoted to 3rd when Whincup moved by under brakes at the following corner. The battle for the lead had also allowed Winterbottom and de Pasquale to close.

Shane van Gisbergen hounded Waters throughout the penultimate lap and traded paint with the Monster Energy Ford Mustang down the front straight before taking the race lead on the inside line to turn 1. The #97 Red Bull Ampol Racing Commodore then took control and van Gisbergen greeted the chequered flag in first from Waters, Whincup, Winterbottom, de Pasquale, Mostert, Percat, Heimgartner, Courtney and Le Brocq.

“I’ve had so much help over the last couple of weeks,” Shane van Gisbergen said to Garth Tander. “I’ve had good surgeons, the Hyperbaric Chambers, our physio and a nice girlfriend looking after me. It’s been a pretty tough two weeks but it was awesome sitting in the car. Hopefully that was a good show to watch, I was trying! I didn’t know how good I was going to be over the race distance but my pain was no worse than it is and it should be right for tomorrow. It hurts, but I am not making it worse by driving so I’ll try again tomorrow.“

“I was a bit annoyed with myself in qualifying, it was up to me and not my injury, and I just didn’t get it right. In the race, the car was awesome. I got a great start, a good first lap, worked hard to save my tyres and slowly picked off some of the drivers for position. The car at the very beginning wasn’t very good – it was very pushy with the rears, but then it got better. I managed to catch the guys at the font, but I think Chaz (Mostert) helped me a bit as he slowed everyone up, but I honestly didn’t expect that. I thought everyone was going to pit on lap five or six, or when the pit window opened, but everyone kept going. I was a bit surprised and didn’t think our strategy would work for us, but we just had the speed in the end. It was a fun battle at the end where I managed to pull a big move on Chaz, although I didn’t think it was going to work considering we were three-wide, but it was pretty cool. I can’t thank the team enough as well, they’ve been bloody awesome this weekend,” said Van Gis in his post race team comments.

The Supercars have two more races today, Sunday. Keep an eye on our website and Facebook pages.