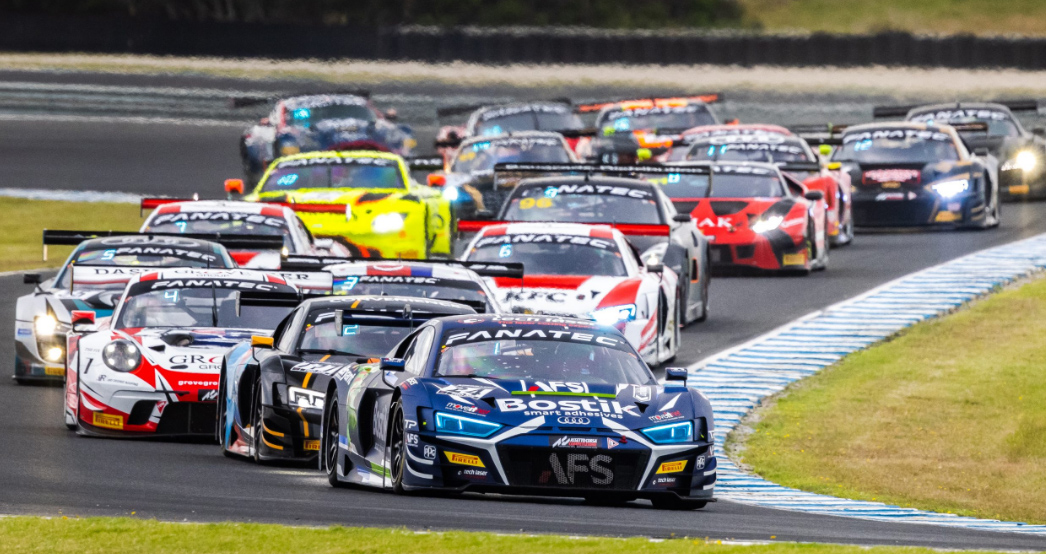 The Bostik Audi R8 GT3 has been driven to third place for the second day in a row by Chaz Mostert and Tony Bates in the Fanatec GT World Challenge Australia Series.

24 Hours after a standout recovery drive led the pair to what would be their first podium of the weekend, the Tony Bates Racing Team secured another one under completely different circumstances. Mostert started the car from third and made early work in moving into second position on the road. The rest of Mostert’s stint was spent piling the pressure on to the race leaders and a move looked likely until the Safety Car came out.

“It’s disappointing to put it on pole and not get a win in the weekend, it’s never good in motorsport but sometimes that’s just how it goes. The positive is the double podium and a strong start to the season for the team and the Bostik Audi, we have showed good pace all weekend and I’m looking forward to the rest of the year,” said Mostert.

Following the quick Safety Car intervention, pit stops took place and Tony Bates was ushered into the car for the team’s final stint of the weekend. Bates emerged momentarily in the race lead, however the #24 was no match for the fresher tyres held by the cars behind.

Despite this, Bates drove a defensive masterclass in which he held off the advances from many faster cars. Bates’s composure showcased the driveability of the Bostik Trade Australia Audi which remained on track and survived many spirited attacks and a second safety car intervention.

“Our whole weekend was compromised by what transpired yesterday, arguably we could have won that race without the drama in the pit lane. Our track position at the start of today’s race was compromised as well but Chaz did an excellent job to stick with the race leaders,” said Bates.

“The Safety Car did not fall at a good time for us, so that threw anther spanner into our race but overall, I have to say I’m proud of the fight the whole team has shown this weekend. We’ve started the championship well, so we’ll look forward to Bathurst now.”

The Tony Bates Racing team finished third in both races for the opening round of the Fanatec GT World Challenge Australia series and subsequently, have finished third in the overall round standings. Round two of the series takes place at Bathurst from April 2-4.