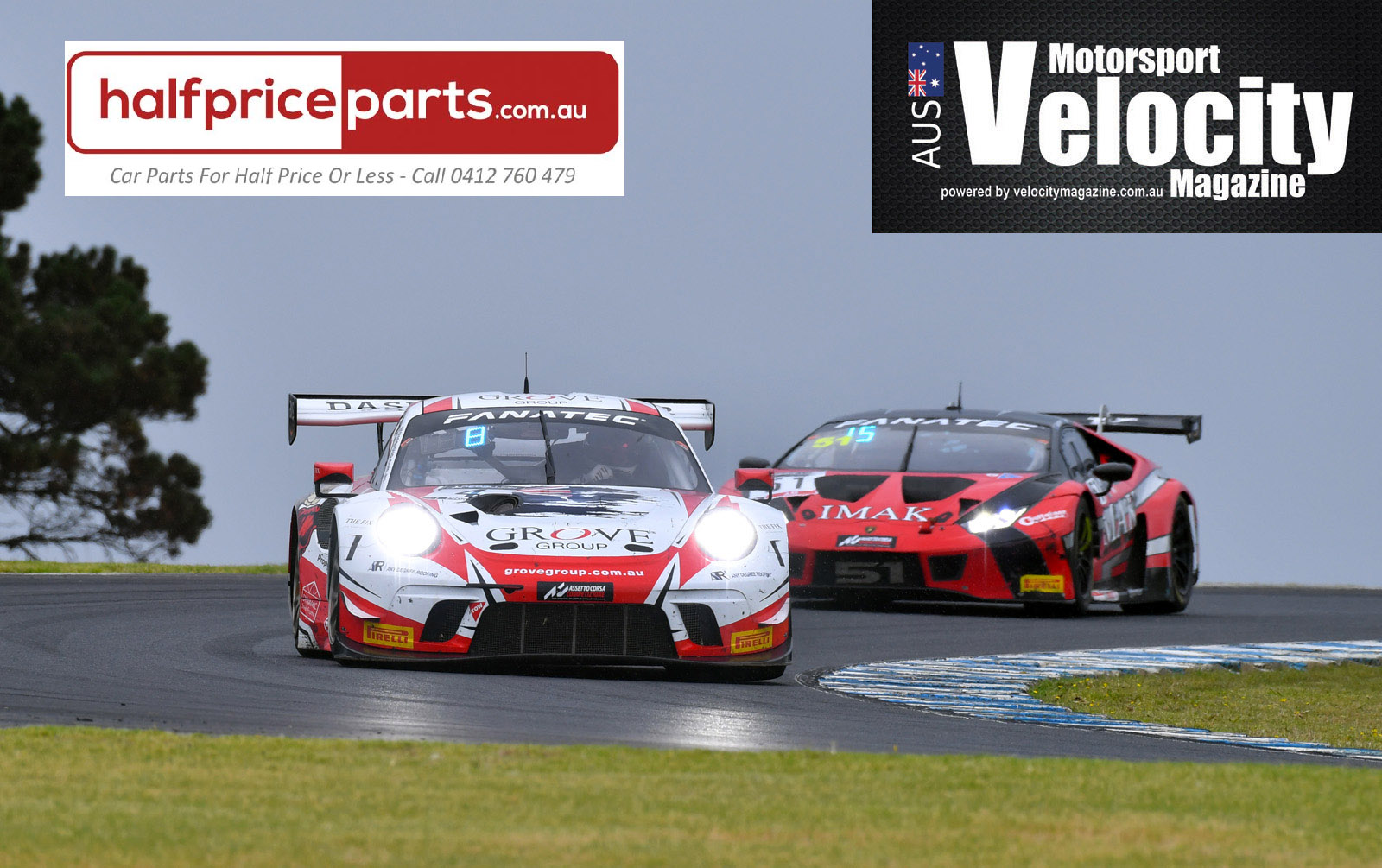 Grove Racings Stephen and Brenton Grove went home from the season-opening Fanatec GT World Challenge Australia Powered by AWS round at Phillip Island with a trophy in hand and big smiles.

Debuting their new Porsche 911 GT3 R in the inaugural event, the Melbourne-based team had tough competition but did not let any hurdles get in their way.

The Groves qualified well and laid down a good foundation to build on in Race 1 and push forward from their fourth-place starting position.

Stephen took the start of the first-ever GTWC Australia race, progressing to second in a hard-fought battle before being one of the first to peel off as the mandatory pit stop window opened.

An issue with the pit limiter forced Stephen to stop on pit entry in an awkward spot and perform a reset before he got going again after losing more than 15-seconds.

Brenton took over the car in 15th and drove superbly for the remainder of the race, passing nine cars on his way to a sixth-place result in greasy conditions.

In Race 2, the pro-rated drivers had to take the start, with Brenton setting off from sixth on the grid up against Supercars drivers Chaz Mostert, Jamie Whincup, and Garth Tander.

The 23-year old immediately vaulted to fourth in the opening exchanges and tried to keep up with the Supercars trio ahead of him until making way for Stephen for the all-important final stint.

Rejoining in second, the experienced Carrera Cup champion snatched the lead and drove away to build an advantage of 13-seconds ahead of the second-place car.

However, all his hard work was undone with a late-race safety car which allowed the field a free-kick to close back up.

On better tyres, the Audi of Yasser Shahin snuck by for the lead as Stephen consolidated second position to claim a well-deserved podium result.

Grove Motorsport sits third in the Pro-Am standings after Round 1, with Round 2 taking place at Mount Panorama from April 2-4.

“We really had to punch above our weight based upon the other three teams with Supercars drivers in their driving combinations. Brenton did an outstanding job to get us in a good position and then I pushed like hell in my stint. We’re a bit unlucky to not get the win considering I had a 13-second lead and then the safety car came out and we just didn’t have the tyres to hold up Yasser to the end. Other than that it was a really good weekend.

“We’ve still got to fully wrap our heads around the technical side of the car, which is a difficult aspect. You’ve got to spend the time and make sure you get across the technical processes of driving the car. You drive every car the same in the sense that a race car is a race car; it’s a tough process trying to get the technical side right because it’s a very sophisticated car, but when you get it working in a good window can really pay off.”

“We’re extremely happy. The competition here is quite high so to be able to come away with a second-place result was a testament to our good strategy. We always aim for the second race to be our better race of the weekend and we were lucky with the first safety car when it brought the field back into contention before the pit stops but then unlucky with the second safety car because Stephen was 13-seconds up the road at that point. But overall happy with how it turned out.

“Every session I was able to get closer and closer to where I wanted to be pace-wise and the second race allowed us to really stretch the legs of the car and see how it performed. For me to try and hang with the Supercars guys was quite tricky but I think we did a good job. Over an aggregate, we were the second fastest car so it really is all positive for the next round.”