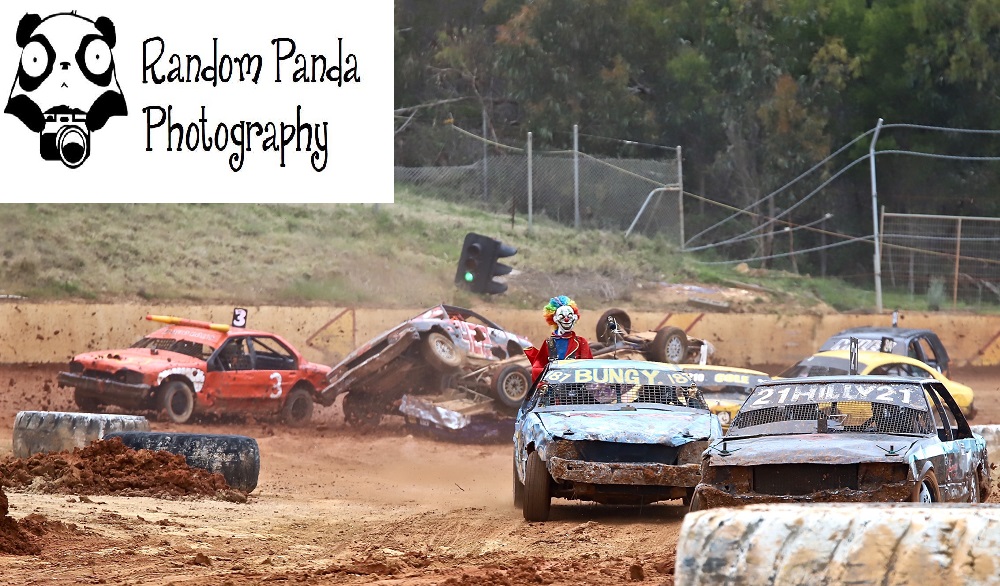 This Saturday and Sunday is a double-header weekend at Daylesford Speedway with action on both days for all club classes and the visiting Crash and Bash co-headlining when they appear on Sunday with the Roz Moynihan Memorial for Daylesford Ladies Sedans across the whole weekend, whilst also during the weekend will be a classic and Hot Rod car display as car owners are encouraged to bring their pride and joy Sunday drivers.

On Sunday the Crash and Bash Association return to Daylesford after some time away from the venue with drivers eager to get a big win in both Open Crash and Bash and Ladies. Open Sedan competitors to keep an eye on include Zac Leeson, Ryan Brown, Ben Lambrick, David Barrie, Brad Warren, Jay Miles, Kev Hughes, Daniel Williams, Alan George, Dinky Parker and Daylesfords own members Leon Argent, Daniel Litten and Jackson Basten.

In the Ladies Crash and Bash field Clare Lynch, Karley King, Kellie Latham, Erin Brown and Marlena Argent all know the strategy well and they will be keen to show some newer drivers who is boss.

What to expect Crash and Bash is a little bit of survival during the heats where some competitors will play nice with each other despite still trying to spin each other out of contention and themselves into the race lead. Once they get to the final though, all niceties are out the window as everybody chases the weekend’s big trophy.

Daylesford Speedway will also host the first ever Victorian Speedway Council 1200cc Junior Sedan event with six entrants nominated for Saturdays racing. Daylesford’s Arthur Hutchinson and Jemma Woods are ready to do battle with Connor and Ty Claridge, Sam Cherry and Riley Taylor for the honour of being the first class winner ever under VSC governance. Hutchinson and Connor Claridge and Sam Cherry are tipped to be vying for the win, however it is a great opportunity here for all to compete with cars with the same engine capacity.

Across the weekend some drivers will attend one of the two days and with that in mind Sunday should be a great day for Street Stocks as Brad McClure and Chris Hay return to battle the current top two club members of the class Des Robinson and Glenn McCoubrie. McClure took the win two weeks ago and had such a great time feeling the love of Daylesford fans; he has decided to come back again. Hay performing strongly in club points and he returns for a third race meeting to try and see if he can stick with Robinson and McCoubrie.

The Daylesford Modifieds will again be great racing with Jaidyn Dredge and Jayden Humphrey both winners this season back to do battle, this time they have last season’s dominant driver Jackson Basten back to contend with.

The Kakoschke boys are back to battle each other with Reece and Bailey expected to be at the front of the field with Jhett Cruize once again. Last time Reece took the final event win, whose it going to be this weekend?

The Classic and Hot Rod car display should also please many with some priceless cars from the past parked up the top end of the venue for people to get close to and have a look at all the love on some terrific machines.

All adults are $15 to enter, whilst any nominated race driver, Life members & aged pensioners are $10. Children 13 to 17 are $5 each and 12 and under are free, no family ticket at these prices.

If you enter on day one and advise the ticket staff that you are coming for both race days the pricing is $25 for adults, whilst any nominated race driver, Life members & aged pensioners are $15. Children 13 to 17 are $5 each and 12 and under are free, no family ticket at these prices.

The venue has catering Coffee van on site, some food providers and a canteen for cold drinks.

Junior Quarter Midget racing starts between 9.30am and 10am, Sedan Racing begins at Midday and the, gates open early from 8am with competitors due at the track by 10.30 and pit gates shut to racing entrants by 11.

NYORA ENTERTAIN THE CROWD ON COLD NIGHT IN GIPPSLAND