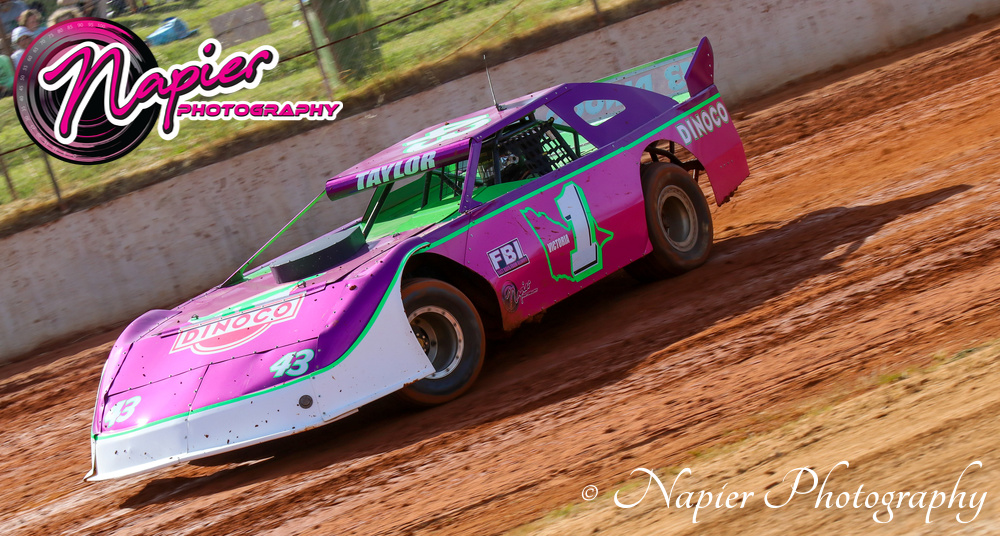 Nyora Raceway in South Gippsland fired up on Saturday night December 12th with its first race meeting since the beginning of the Covid Pandemic. Regular Nyora patrons and race drivers all enjoyed a great night out with Nyora members winning five of the seven feature events later in the evening, Santa Claus making a visit and thirty-eight races filling the programme.

The ‘Covid Showdown’ event to end the evening included hard thought battles throughout the field with Owen Cecil taking the event victory in front of Smith, Rhys Meakins, Harry Cecil and Maddison Miles.

A large field of entrants in the Open Standard Saloon category competed in nine heat race events to determine the feature line-up. Some highlights included a masterful display from Daniel Stewart driving just above the racing line all the way around all race long to win a heat followed by Hanna Domburg.

Another highlight was Russell Hill defeating Rhys Lansdown twice as the two zipped in and out of the field working their way past other contenders.

In the feature event, Lansdown set about starting the club aggregate count off on the right foot. He took the lead early ahead of Stewart. As an incident further back in the pack caused a yellow flag stoppage, a coming together of Lansdown and Stewart potentially could have ended the charge for the race leaders.

Developing drivers in New Star grade of Juniors was dominated by the talented Jack Randall. Randall began last season in a 1200cc car and is now in a 1500cc machine in his second season. Randall won all three of the heat races before winning the feature race from Maddy Capon, both youngsters much improved since last season with first race rookie Jack Kershaw third ahead of Arthur Hutchinson and Rowdy Andreatta.

Standard Saloon Ladies action in the heats ended with Sara Benson winning all three in front of Courtney Meakins and Hanna Domburg. The feature race was more eventful with Victoria Champion Trish Dike making a pass on Domburg that finished with contact between the two cars. The pass was deemed illegal however the race continued with the penalty to be given at the end of the race, no matter where she finished Dike could not win.

Dike went on to pass Meakins and then Benson and greeted the chequered flag first before being advised she was penalised for the pass on Domburg. Benson was declared the winner from Meakins, Dike, Domburg and Sarah Price.

Rounding out the complete nights results was the Sports Sedans with Josh Service the only driver to win two qualifiers whilst Brendan Miller, Scott Angus, Matt Brooks and Jamie Paull each won one.

In the final Angus who is a state champion in another category, took the win ahead of Service, Paull, Warrick Taylor who competed in two classes during the event and Brendan Miller.

It was a wonderful night for many reasons with motorsport fans getting the opportunity to see motorsport, albeit under social distancing conditions. Many happy faces after a tough year.

NYORA ENTERTAIN THE CROWD ON COLD NIGHT IN GIPPSLAND