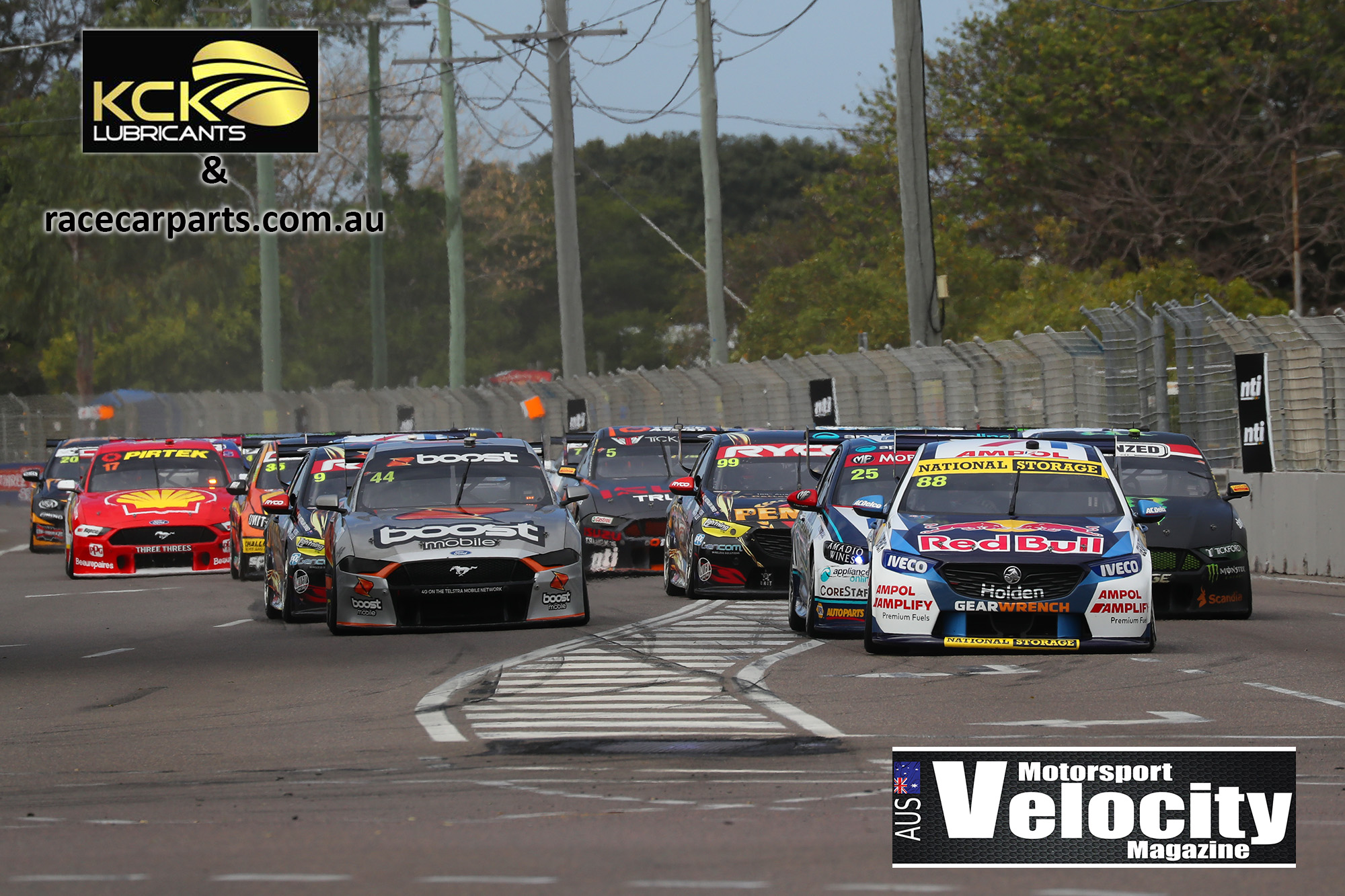 Jamie Whincup made it a double at the NTI Supersprint with victory in Race 20. After the multi car pile up in the preceding race, it was a more sublime affair as Whincup effectively led through the event.

Whincup started from pole position as quickly moved across to the left to cover second placed Chaz Mostert on the run down the main straight towards the first turn kink and then the tight turn 2, the scene of Race 19’s incident. The field ran 3 wide as drivers looked to gain an advantage, but exercised a far greater degree of caution into the braking area and through the corner proper.

Whilst it was plain sailing at the front for Whincup, race 20 presented another challenge for championship leader Scott McLaughlin. The Shell V-Power Mustang was once again planted mid pack after another struggle in qualifying saw McLaughlin start the race from 13th. He was once again fortunate to emerge with nothing more than superficial damage after contact from the Supercheap Auto Mustang of Jack Le Brocq under brakes for turn 3. 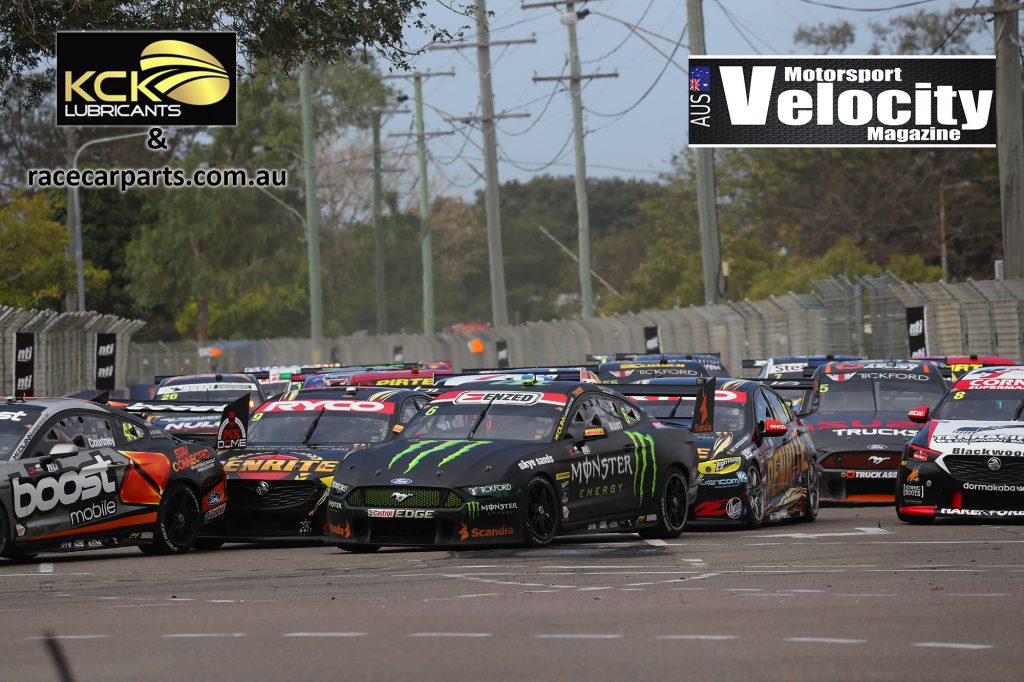 The order after lap 1 was Whincup from Mostert, James Courtney, David Reynolds and Cam Waters. McLaughlin had dropped further down the order to 15th. It was no surprise then to see McLaughlin amongst the first to stop on lap 8. The advantages gained by returning in clean air proved to be somewhat offset by the longer run to the flag on older tyres. The moved elevated the #17 Shell V-Power Mustang to 7th once the pitstop cycle concluded.

Whincup held a 3 second gap to Mostert with 5 laps left to run. Shane van Gisbergen climbed up to 3rd place a further 10 seconds behind the second placed WAU driver. Fifth through to seventh place were separated by little more than a second and created the most excitement in the closing laps of the race. Percat edged past Courtney for 5th at turn 1 and McLaughlin followed through to see the Boost Mobile Mustang drop to 7th in the space of two corners.

“Car was fantastic,” Whincup told Fox Sports. “Good battle with Chaz down into turn 2, but from there the car was excellent. I was able to hold position. We don’t normally go long, we go pretty short, but it was great to go long and have some pretty good tyres for the end. No issues with the radio this race. We’re P4 in the next one and we’ve used a fair few of our tyres up as well. We’ll do our best in the last one to try and hang in there as well as we possibly can. The game is ti try and score as many points over the weekend. We’re in a pretty good position but certainly have to round it off in race 3.” 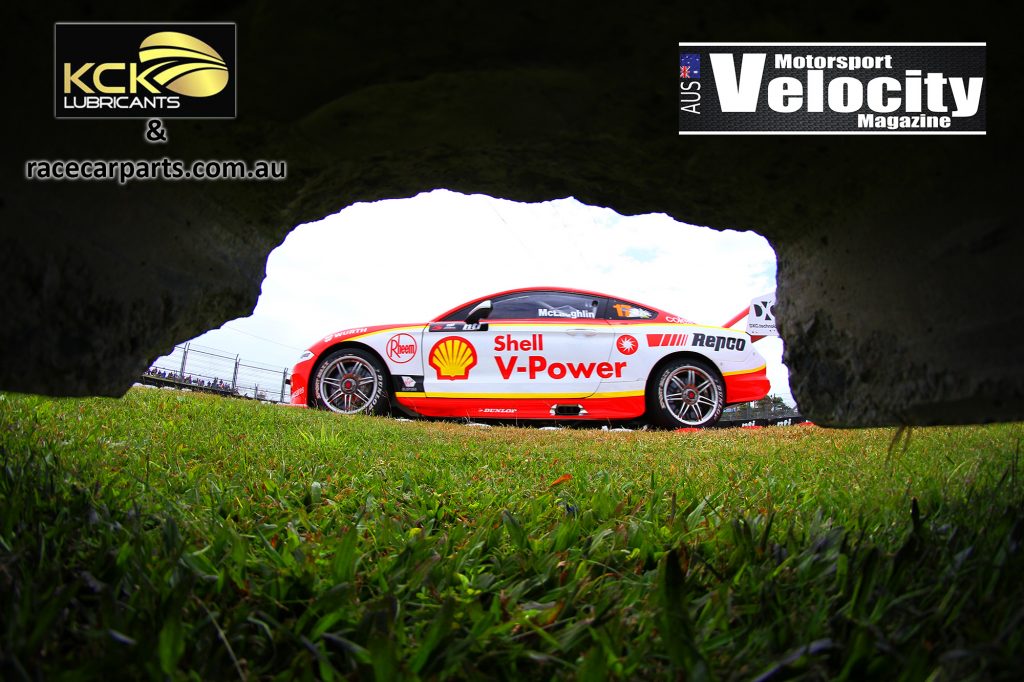 Scott McLaughlin bounced back from two tough outings at the NTI Townsville Supersprint to take the win in Race 21. The #17 Shell V-Power Mustang was back in familiar territory at the head of the grid for the final race of the weekend after a disastrous qualifying effort in the two earlier races saw McLaughlin start from 16th and 13th respectively.

McLaughlin took advantage of his front position to grab the lead off the line, while second placed Cameron Waters came under siege from Percat to his right and Whincup on his left after the Monster Energy Mustang was slow off the line. Waters held on to second at the exit of turn 2 only to lose the place to Nick Percat at the following corner. Todd Hazelwood was another to make an excellent start and used some controlled aggression to muscle past Reynolds at turn 1, only to cede the position back to the Penrite Erebus Commodore a short time later on.

The field began to settle by lap 3 with McLaughlin ahead of Waters, Percat, Whincup, Reynolds and Hazelwood. Shane van Gisbergen was embroiled in a battle with Pye and Courtney for 11th position as the #97 RBHRT Commodore continued to battle back in the pack throughout much of the weekend.

Waters looked for an undercut when he stopped for tyres on lap 17 and almost grabbed the lead when McLaughlin pitted on the following tour. Waters closed on McLaughlin as the championship leader gradually brought his Dunlop tyres up to racing temperature, but could not find a way past the Shell V-Power Mustang. Any hopes Chaz Mostert held for another podium for the weekend disappeared when he was forced to stop again after his right rear tyre deflated. Whincup held the lead with 17 laps left to run from Hazelwood, Winterbottom, Pye, Holdsworth, van Gisbergen, Courtney, Le Brocq, Heimgartner and Coulthard, while McLaughlin was the first to have stopped in 13th place. 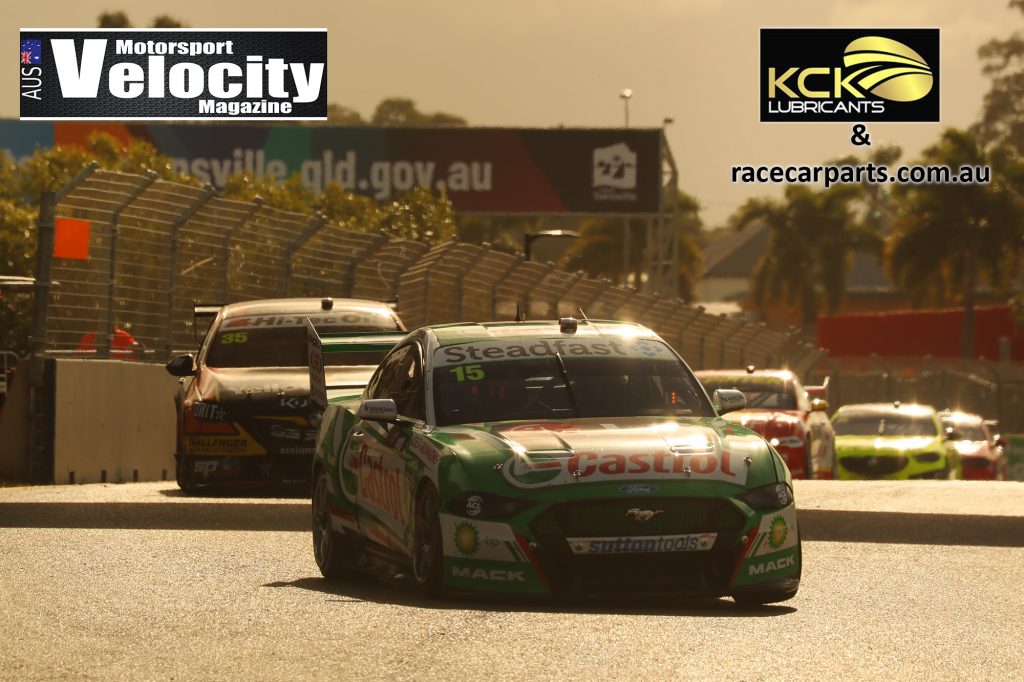 As the last of the field took their compulsory stop McLaughlin returned to the front with Waters slowly dropping away from the tail of the #17 Shell V-Power Mustang. Jamie Whincup held 3rd place a further 2 second further back, though comfortably ahead of Nick Percat. Scott Pye had been on a charge throughout the second half of the race and climbed deep into the top 10 as the laps counted down.

McLaughlin was relieved to greet the chequered flag for his 52 Supercars victory and first win of the weekend from Waters and Whincup. Percat, Hazelwood, Pye, De Pasquale, van Gisbergen, Holdsworth and Winterbottom rounded out the top 10.

“We found direction this morning in qualifying and that’s a great start for us for next week,” McLaughlin told Fox Sports as he tried to put a positive spin on what had been a largely disappointing weekend. “I was happy to get the start, it was an awesome battle with Cam. We’ve got a little bit of work to do, but very happy. The Shell V-Power team are continually working very hard and to get a win on a tough weekend is a great thing.”

From Cameron Waters, second was another welcome return to the podium for the Monster Energy Mustang driver.

“Absolutely pumped!” Water exclaimed to Fox Sports. “I gave Scotty everything I had then but couldn’t match him to force a mistake. Second was all we could do but there is lots of pace in this car and it was a really good weekend.”