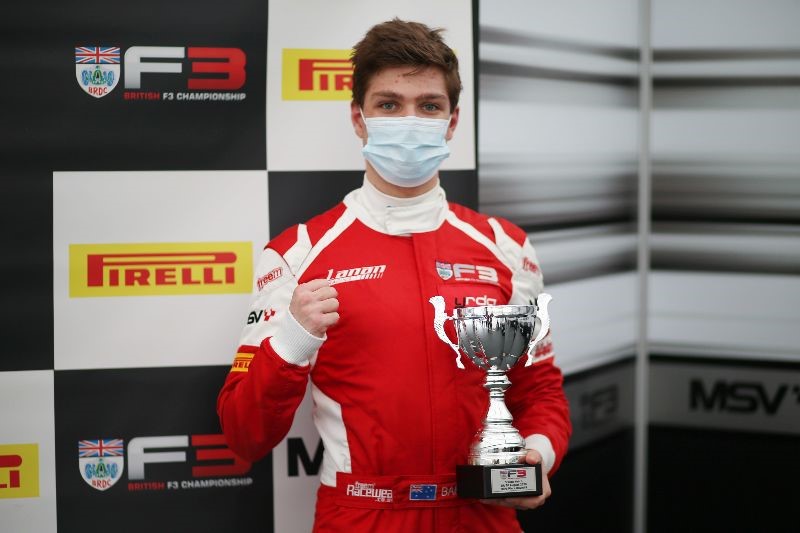 The 18-year-old Lanan Racing driver put behind him a fighting weekend at Donington Park two weeks prior, and showed promising pace throughout a pair of test days at Brands Hatch that hinted at a strong weekend in store in Kent.

Having shone during a Friday test day which concluded in a dramatic storm, Horsten hoped to take that top-five pace into the weekend’s qualifying session on Saturday morning. Cars went out with wet tyres on a drying track for the session which was twice halted by red flags, Horsten briefly jumping up to second before a late flurry of action bumped him to 10th place when the track was at its driest.

The Perth youngster set about making a recovery drive akin to his Donington efforts later that morning, climbing up into the top seven in the early stages of the first of the weekend’s four races. Chasing hard on a safety car restart to find a way past Saskorn Chaimongkol, Horsten made a spectacular save following a moment at the high speed Sheene corner that unfortunately dropped him to 13th by the chequered flag.

It would provide a stepping stone to a strong result later however, with the finishing positions reversed to decide the starting order for the second race later that afternoon. That put former British F4 frontrunner Horsten, backed by sponsors The Web Guys, Kapow! Coaching, CKD Shop and EP Warmfloor, on the front row of the grid, and despite a good start he was powerless to stop a fast-starting Nazim Azman from getting past.

Horsten chased the top two throughout in a tightly-bunched game of cat and mouse, coming home a narrow third to ensure he collected the second podium finish of his rookie season so far.

Starting 10th again for the third contest on Sunday morning, Horsten evaded two incidents that caused a red flag and, on the subsequent restart, the Lanan driver made his move for seventh with a decisive lunge up the inside of Reece Ushijima at Paddock Hill Bend. Horsten chased Louis Foster for the remainder of the race but could not find a way by his former F4 rival, adding a finish of seventh to his tally.

Race four’s grid was decided by drivers’ two fastest average lap times from the three previous races, putting Horsten a credible fifth on the grid. Chasing after Kiern Jewiss for fourth place after dodging a slow car heading into the first corner, Horsten came home seventh after a brief moment on the final lap attacking for that extra spot at Sheene.

With three meetings and two podium finishes now under his belt, Horsten’s next outing comes in three weeks’ time when the BRDC British F3 Championship returns to Donington Park for three more races across the weekend of 19/20 September.

Bart Horsten: “It’s great to come away with another podium and I think we deserved it for how quick we were in testing before the meeting and again during the races.

“I knew that we were fast in the second race in particular, but once we were all so close through the faster corners, it was tough to just get into the right position to attempt a big lunge on the leaders. They weren’t making any mistakes so we were really tight, but it’s good to know that we’re quick enough to fight for wins this season.

“I thought that in qualifying we had the pace definitely to be in the top three, so it was disappointing to only start P10 after we had shown good pace. We were therefore playing catch-up a little bit, so to come away with four races finishes and a solid haul of points is pleasing.

“I’m looking forward to going back to Donington and this time hopefully we’ll get a cleaner run at it. We’ve recovered well from the accident that we suffered there earlier in August and we topped a test there just before it happened. The team have given me a good car and I’m sure we’ll be in the mix again.”