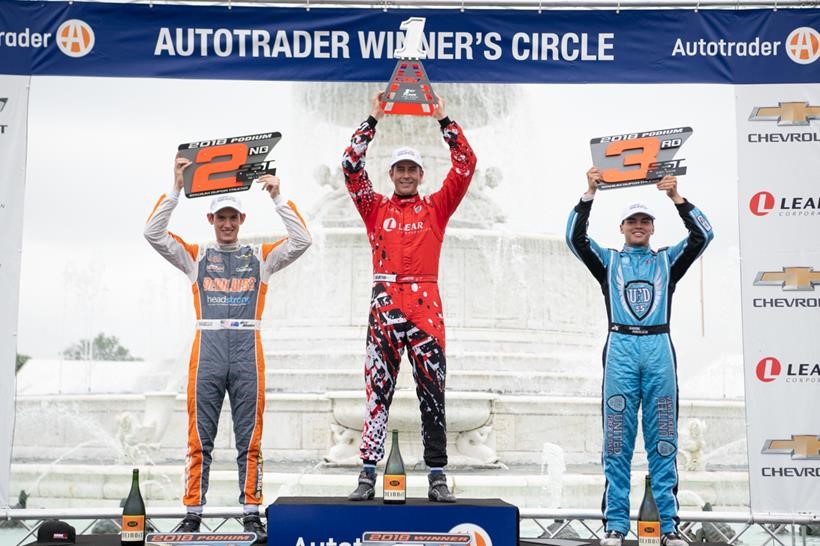 The Preston Rentals ambassador made the best of a bad day yesterday coming from the rear of the field to fourth with a severely underpowered car.

One of the spark plugs overheated during the long yellow period in the race, causing the plug to become loose. As the race restarted and Brabham went over one of the jumps, the plug disconnected, dropping a cylinder for the remainder of the race.

However, his efforts kept him in fourth, though unable to challenge for a top three finish.

It was a tight weekend with the points swinging between Arie Luyendyk Jr, Gavin Harlien and Brabham. Whoever finished first in the Sunday race would take the overall round win.

The DeVilbiss team were able to get Brabham’s truck back up to power and he was able to take the fight to the front in the second race of the weekend.

By the first competition caution Brabham had made his way from 8th to 3rd, to sit behind fellow compatriot Paul Morris.

Brabham then muscled his way past Morris to chase down race leader Arie Luyendyk Jr.

Morris ended up on his roof at turn three, with a red flag coming out so the safety crews could attend the scene.  The 2017 champion climbed from the car under his own power, however the race was called and the places decided.

This then secured Brabham’s second place for the weekend, helping to keep his championship fight alive.

The Stadium SUPER Trucks are now off to Texas Motor Speedway for next weekend (June 8/9), again supporting the IndyCar championship.

The Texas track also offers more of a challenge with a switch back to a dirt course and the big gap jump.

Brabham’s longstanding charity partners, The Chris Kyle Frog Foundation who offer support to military and first responder families will be in Texas where Brabham will meet and greet the guests.

WHAT MATT BRABHAM HAS TO SAY…

“It was another one of those crazy weekends that’s hard to get through the field. Both races were kind of cut short, obviously today and yesterday. With the cylinders, I lost a cylinder yesterday,” said Brabham.

“Overall the weekend was quite positive, I was able to maintain my postion and didn’t lose any ground in the championship. So it was a positive weekend. I think I did quite good too under the circumstances that were out of my control that held me back, I was happy with my performance.

“We were sitting for a long time under yellow when they were recovering the truck that crashed. One of the plugs got hot and it just became loose so when I hit a jump it came off and from then I was running on seven cylinders. It was just one of those things, nothing anyone can really do about it. They were able to fix it and the truck ran better in the second race.

“Arie really just got through the field quicker than I did and he earned the win. I’m glad Paul’s okay, that was a pretty big one for Paul.

“Texas is a good track, it should be good with all the support there. Texas is also home to the Chris Kyle Frog Foundation. It’s going to be really cool to be there in front of those guys and to help them out. They’ll have some merchandise there at the track they’ll be selling.

“We’ll also have guests from Preston Rentals with us in Texas,  it’ll be great to show them how much fun Stadium SUPER Trucks is.

“It’s always a good race, everything’s bigger in Texas and they’ve got that big gap jump.”