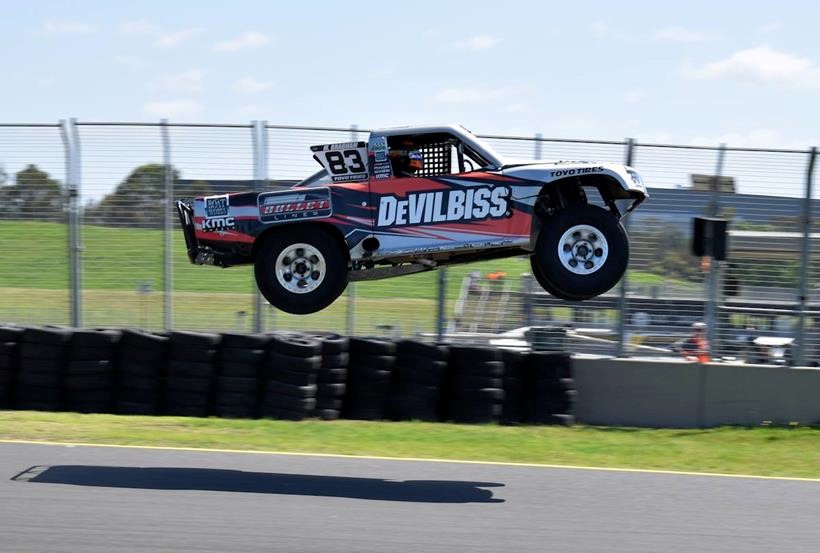 Australian-American, Matt Brabham has ended up third overall in Stadium SUPER Trucks this weekend while on the hunt for his first championship in the series.  It was a perfect start to the weekend by The Boat Works ambassador, scoring pole and victory on Saturday.

Brabham’s incredibly quick lap put him at the back of the reverse grid for the afternoon race, scoring himself not only a point for fastest qualifier but points for every truck he passed on his way up the field.

Starting from ninth Brabham had pulled himself into fourth by the time the competition caution came out on lap six. Brabham’s championship rival Gavin Harlien was leading the field as the DeVilbiss racing entrant set his sights on getting to the front. It wasn’t until the penultimate lap the Brabham utilised the slipstream on the front straight, ironically titled Brabham straight, to shoot passed Harlien for the lead and eventual race win.

Sunday however was turned the weekend on it’s head for the Indy 500 starter. While the 23-year-old was able put together the second fastest lap in qualifying, the race didn’t go exactly to plan.

Brabham started from the back row again of the reverse grid and made a quick start, putting himself into fifth by lap 5. Getting his elbows out just as the competition caution loomed Brabham battled with Bathurst 1000 winners Russell Ingall and Paul Morris. However, he had a wild moment coming off the last jump as the leaders came under the caution and subsequently found that his truck had bucked a belt.

Brabham’s charge came to an unfortunate end as he had to pull into the pits and fell three laps down. The truck was repaired in time for Brabham to get out and take the chequred flag on the final lap. Brabham also took the opportunity to let off steam and put on a show for the Australian Motor Racing Series crowd, creating a bit of tyre smoke and getting up on two wheels.

While Sunday may not have ideally yielded a maximum point score for Brabham, he was still able to finish third overall for the weekend. The Stadium SUPER Trucks series now heads into the final round at Glen Helen Raceway (November 30th – December 2nd) which will act as the championship decider.

“Qualifying on Saturday was great, to get the pole by two seconds was pretty awesome. I was really able to nail that pole lap,” said Brabham.

“The race on Saturday went to plan. I was able to pretty methodically make my way through the field and with two laps to go get myself to the lead. It was a perfect race and we were able to bag a few points from it.

“It was awesome to be able to get the DeVilbiss truck up on the podium with The Boat Works on it as well.

“This morning we had a really good battle in qualifying with Blade (Hildebrand). He was able to get a tenth on me, but it was really cool to be able to have that battle going.

“Today’s race was going the same as yesterday, we were on plan and I was making a few passes. I went to make a pass and get away from the pack and battle for the win when the belt came off and that was the end of our race. “I hoped that if I could pull into the pits we’d be able to fix it before the end of the caution, but unfortunately it took a bit more time.”

“I’m a bit disheartened by today but I’m happy with the pace we had over the weekend, I felt like I was the guy to beat.”

“It was definitely pretty cool to have Russell Ingall racing here this weekend.  Battling with him in today’s race was awesome. I was able to pass him into turn one and he passed me straight back.

In the series it’s all about race craft, it’s really driver versus driver. Stadium SUPER Trucks produces true driver battles, and it’s awesome having guys like Ingall in the field showing that.”