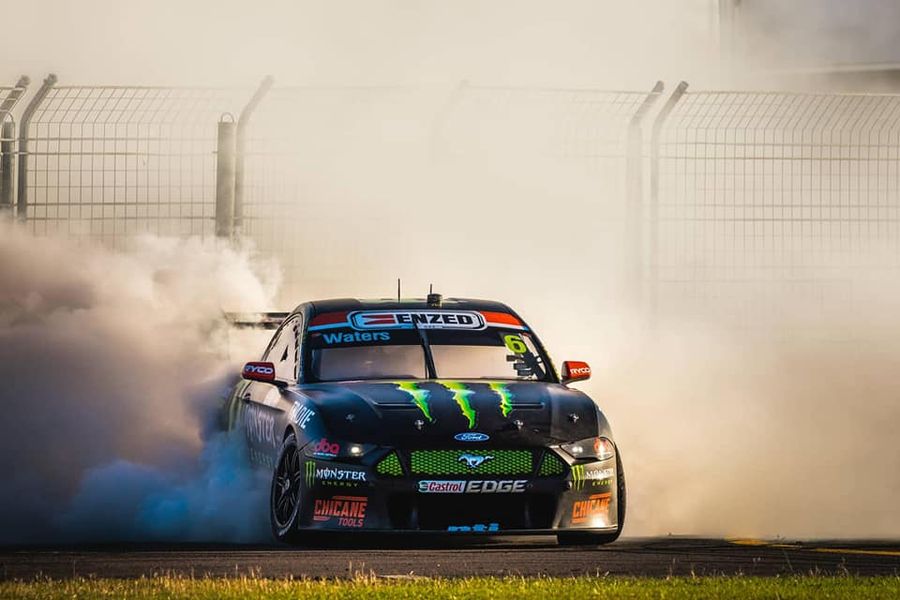 Cameron Waters and Shane van Gisbergen shared the front row for the final race of the weekend. Will Davison and Anton De Pasquale made it an all Shell V-Power Racing second row, with Todd Hazelwood and Jamie Whincup just behind. Waters initially crept over his grid box before nudging back to sit right on the yellow line leaving the Monster Energy Mustang driver no margin for error at the start.

As the race got underway Waters and van Gisbergen were evenly matched through the first turn, with Waters holding the advantage of the inside line for Turn 2. Waters held a small lead as the field snaked their way towards Turn 3. Hazelwood looked to move inside van Gisbergen but the Red Bull Ampol driver closed the door. Davison, Fullwood, De Pasquale, Jones, Whincup, Reynolds and Courtney were the Top 10 to that point, with Whincup losing places as drivers squabbled for room in a congested pack. 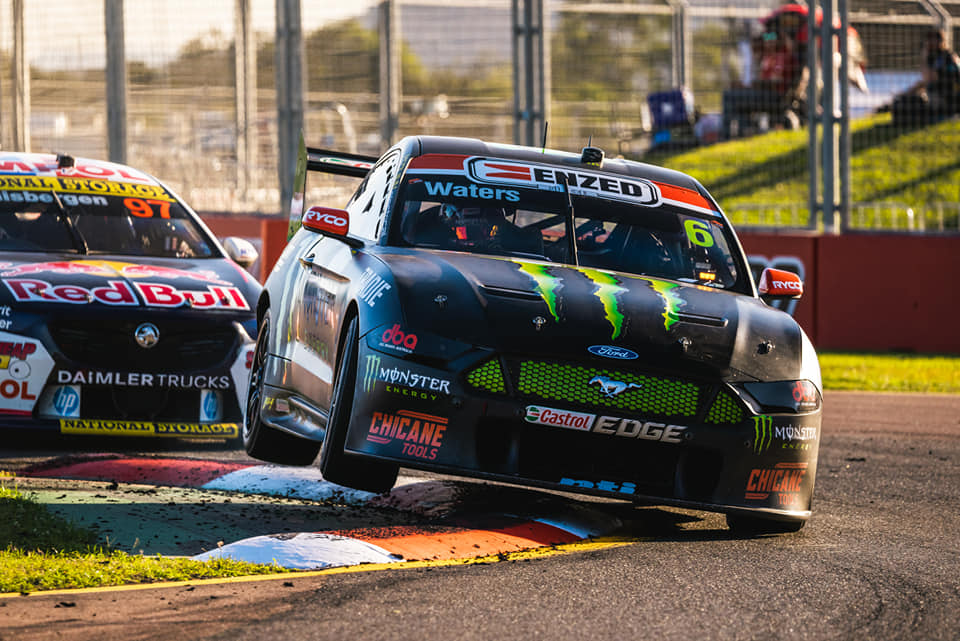 Waters had moved out to a 1 second lead after lap 2 as van Gisbergen brought his tyres up to temperature and backed the field behind the #97. By lap 5 the Red Bull Ampol Racing Commodore sat on the rear bumper of the Monster Energy Mustang. Davison was a further second behind with Hazelwood. De Pasquale, Fullwood, Reynolds, Jones, Whincup and Percat were all within a second of one another. In fact there was less than a second separating each following car in the race.

The lead changed as the field filed towards the final turn at the end of lap 5. The move had become van Gisbergen’s preferred passing point and a late dive up the inside caught Waters unawares.

By lap 10 Shane van Gisbergen had edged out to a 1.3 second lead over Waters and Davison. Hazelwood held 4th place from De Pasquale, Fullwood, Reynolds, Jones, Whincup and Percat. Davison was the first of the lead group to pit on lap 14 and exited well ahead Whincup, Reynolds, Jones and Slade, who had also made their pitstop.

The race complexion changed significantly on lap 18 as Macauley Jones fought Tim Slade for 17th place. Jones twice went ahead of the Cooldrive Mustang only to see the more experienced Slade re-take the position moments later. Jones tried to stay close on the run towards the Turn 11 hairpin but got caught out by the dirty air behind the Mustang and slid into the wall at the exit of Turn 10. The impact broke the front right steering on the Coca Cola BJR Commodore and left Jones stranded in the run -off at the hairpin.

The Safety Car was called immediately, which presented a free stop to those yet to pit, most notably race leader Shane van Gisbergen. Cameron Waters ran a second lap before entering the pitlane with Todd Hazelwood. It proved to be a masterstroke as Waters emerged in the lead from Davison and van Gisbergen.

The short caution period came to an end on lap 23 and Davison ran with Waters down the main straight and had a half look into Turn 2. Waters kept the lead and shot away to a 1.5 second lead as van Gisbergen looked to push past Davison. The Red Bull Ampol Racing car finally made the pass at Turn 10 and set off in pursuit of the leader.

Shane van Gisbergen repeated his strategy from the opening stanza of the race and worked his tyres back up to temperature then gradually reduced the gap to Waters. By lap 32 of 39 he had once again latched on to the rear bumper of the Monster Energy Mustang at Turn 11 and nudged the rear panel to let Waters know that he was there. Waters resisted the pressure and headed off on the final lap just over a half second ahead of van Gisbergen and a further 8/10ths of a second to Davison in 3rd.

Waters stretched the gap to 7/10ths during the final lap to take the win from van Gisbergen and Davison. 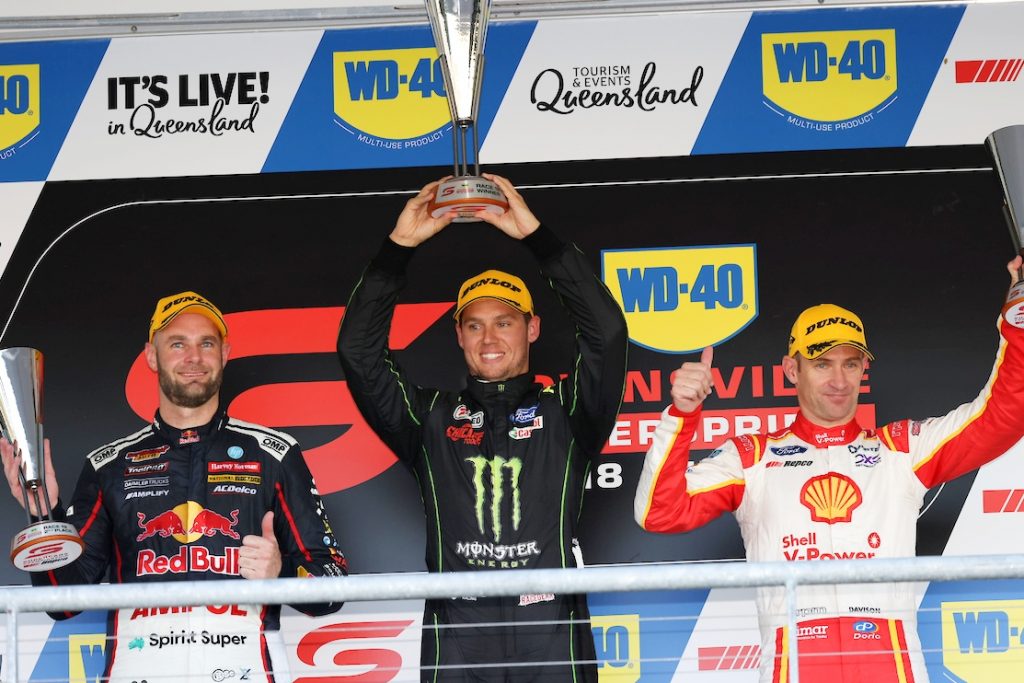 “I don’t know what really happened with the pitstop, but we had a pretty good race car and was trying to hang on to Shane in that first bit,” Waters told Supercars Media. “I came out in front of him and was pushing as quick as I could and had a mega battle with him, which was really cool. Awesome to get one on him and win the race. It’s awesome racing Shane, he’s so good at racecraft and racing people. There’s respect there, we were side-by-side into Turn 2 and giving each other the chukkas and having a bit of fun with, so yeah really cool racing.”

“It was awesome fun and I don’t think that the boss will tell me off for that race, except that I didn’t win” van Gisbergen joked to Supercars Media.”It was a great battle, he put it all in the right spots and down the straight I was giving him the thumbs up. You race a guy like Cam and you know that he’ll give you the room. There’s a lot of good guys in the category and a few who aren’t. It’s good to be racing him and great for those guys to win a race. Yeah really enjoyed it, but I would have loved to have won. Little bit unlucky with the Safety Car but that’s the way it goes. A good weekend”