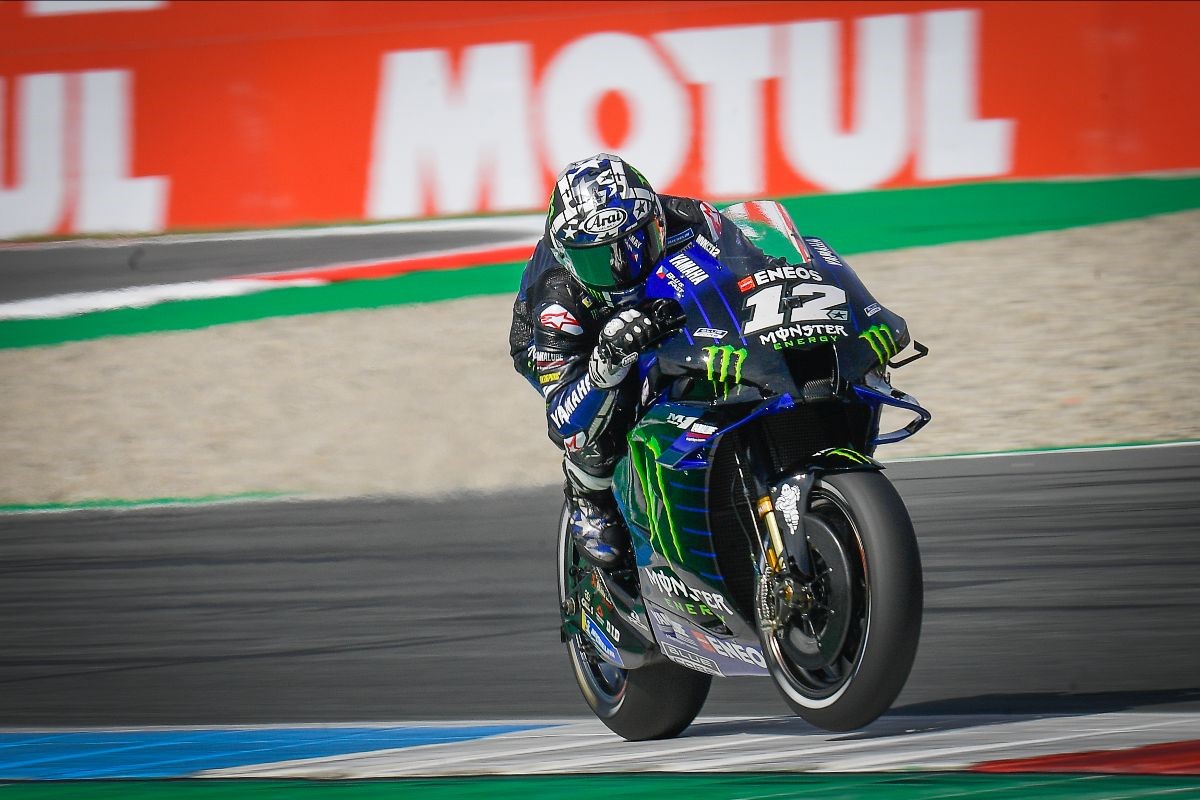 It’s a Yamaha 1-2 with Ducati in third as Marquez suffers worst MotoGP™ qualifying to date in P20.

Maverick Viñales’ (Monster Energy Yamaha MotoGP) stellar weekend at the Motul TT Assen only continued on Saturday, the 2019 winner at the track once again flexing his speed to top the timesheets and this time for pole position – with a new all-time lap record to boot. Just 0.071 kept Top Gun ahead of teammate Fabio Quartararo in a close-fought Yamaha 1-2- at the Cathedral, with Francesco Bagnaia (Ducati Lenovo Team) completing the front row via Q1.

Q1
Q1 had some big names including the aforementioned Bagnaia, Sachsenring winner and eight-time World Champion Marc Marquez (Repsol Honda Team) and second in the standings Johann Zarco (Pramac Racing). It was a chaotic session at times but Bagnaia kept it pinned to move through, pipped late on by Zarco after the Frenchman had some issues early on. The two Borgo Panigale machines proved the graduating duo though, denying Iker Lecuona (Tech3 KTM Factory Racing) by a tenth.

Marc Marquez crashed out of the session, rider ok, with only half a minute left on the clock as he lost the chance to move to Q2. Consequently, the number 93 suffered his worst qualifying ever in the premier class as he gets ready to start from 20th, and has another surprisingly tough day at the the office alongside him: Brad Binder (Red Bull KTM Factory Racing).

Q2
Free Practice 1, 2, and 3 pacesetter Viñales set the initial time to beat, a 1:32.413, but it was beaten on Quartararo’s first fast lap by 0.077. However, El Diablo’s next flying lap was nothing short of stunning: through Sector 3, Quartararo was over three tenths faster than his own time and was on course to set the first-ever sub-1:32 lap time at the Cathedral of Speed. Sure enough, hecrossed the line to lay down Assen’s fastest-ever two-wheel lap – a 1:31.922.

At the end of the first runs, the number 20 was a stunning 0.491 clear of Viñales in second place, with three tenths then separating third-place Zarco from ninth-fastest Alex Rins (Team Suzuki Ecstar). It would take an almighty effort to beat Quartararo’s time, but that’s exactly what Viñales was about to pull out the hat. His first lap went astray after a moment at Turn 9, but his sixth lap of the session saw Viñales set a blockbuster 1:31.814 to beat his teammate by 0.071, a scorcher from Top Gun.

Bagnaia then shot up to P3 before Miguel Oliveira (Red Bull KTM Factory Racing) hit back, but Takaaki Nakagami (LCR Honda Idemitsu) decided it was his turn to sit on the provisional front row and the Japanese rider took over in third.

As the end of the session approached, all eyes turned to Quartararo. Up by nearly two tenths in Sector 1, the Frenchman was 0.135 under at the end of Sector 2. A small mistake at Turn 10 cost the number 20 time, however, and crossing the line, he couldn’t improve… leaving Viñales unthreatened at the top as the number 12 took pole for the first time in 2021. Bagnaia then shot into third, demoting Nakagami right at the flag.

The Grid
Viñales, Quartararo and Bagnaia lock out the top, with Nakagami leading Row 2 in P4 after his best qualifying of the season. He’s joined on the second row by Zarco and Oliveira. Rins suffered a late crash at Turn 8 but is unhurt and will start from P8 as the leading Suzuki, with Jack Miller (Ducati Lenovo Team) and Aleix Espargaro (Aprilia Racing Team Gresini) on the third row in 8th and 9th respectively. Just over three tenths covers Bagnaia to Aleix Espargaro.

Reigning World Champion Joan Mir’s (Team Suzuki Ecstar) qualifying struggles continue as the Spaniard starts P10, but the number 36 has very good race pace. Pol Espargaro (Repsol Honda Team) is the second fastest Honda rider in P11, and the Spaniard sits just 0.089 ahead of 12th place Valentino Rossi (Petronas Yamaha SRT) after the Doctor made it through to Q2.