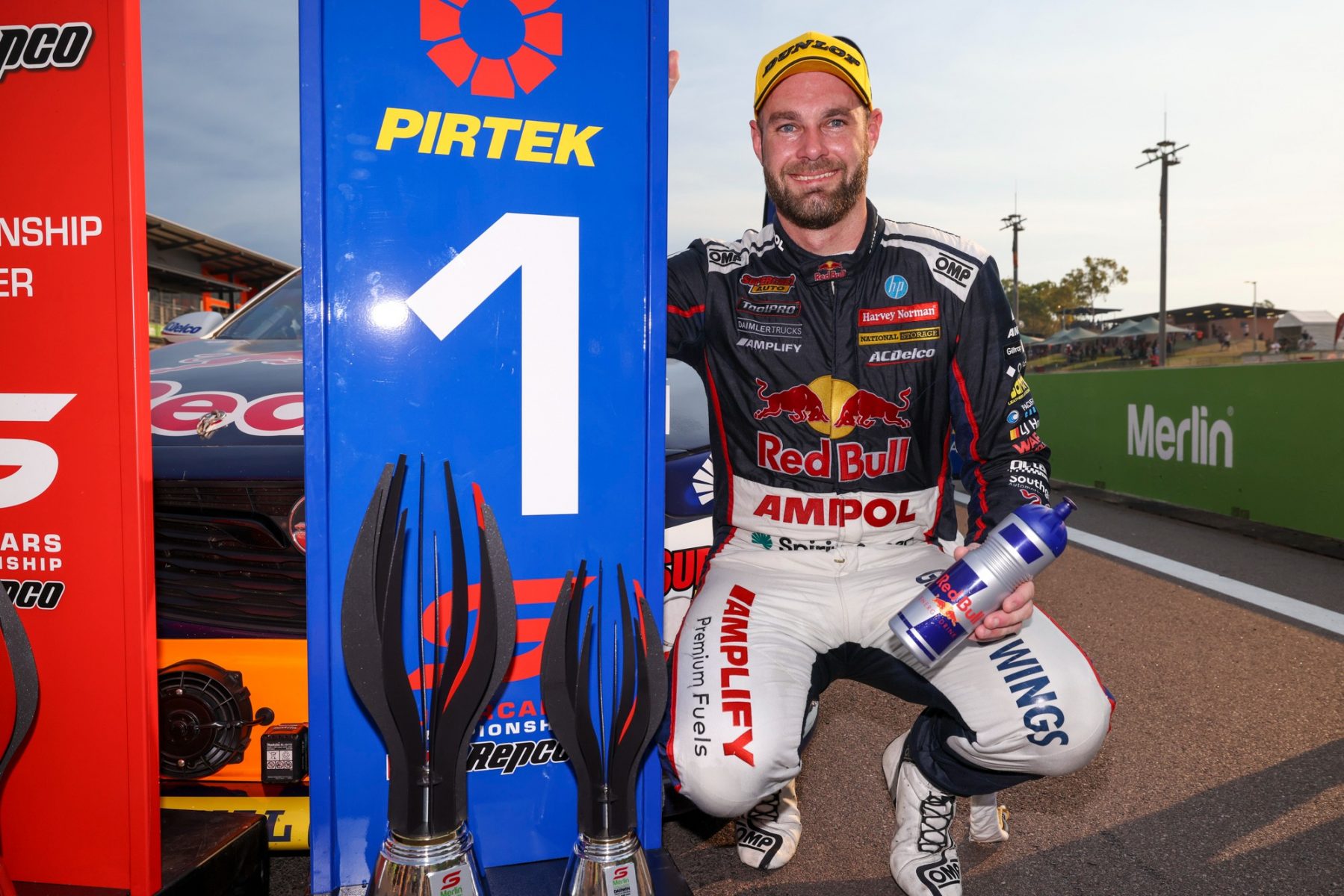 Will Davison claimed pole position for races 13 and 14 in the 2021 Repco Supercars Championship from Shane van Gisbergen, but it was the Red Bull Ampol Racing driver that left the top end with a double race victory on Sunday. After issues with a rogue wheel nut derailed the Kiwi in Saturday’s Race 12, there was no stopping him on Sunday.

Shell V-Power Racing held pole position for Race 13 in the 2021 Repco Supercars Championship, with Will Davison emulating the achievements of teammate Anton De Pasquale from the day before. Amidst the jubilation of that achievement there was also some trepidation that the race was not also going to repeat the pattern of Race 12.

Shane van Gisbergen sat in second on the grid with the front row from Race 12 of De Pasquale and Winterbottom filling out row 2, while Will Brown had qualified in an excellent 5th place, just ahead of Jamie Whincup. 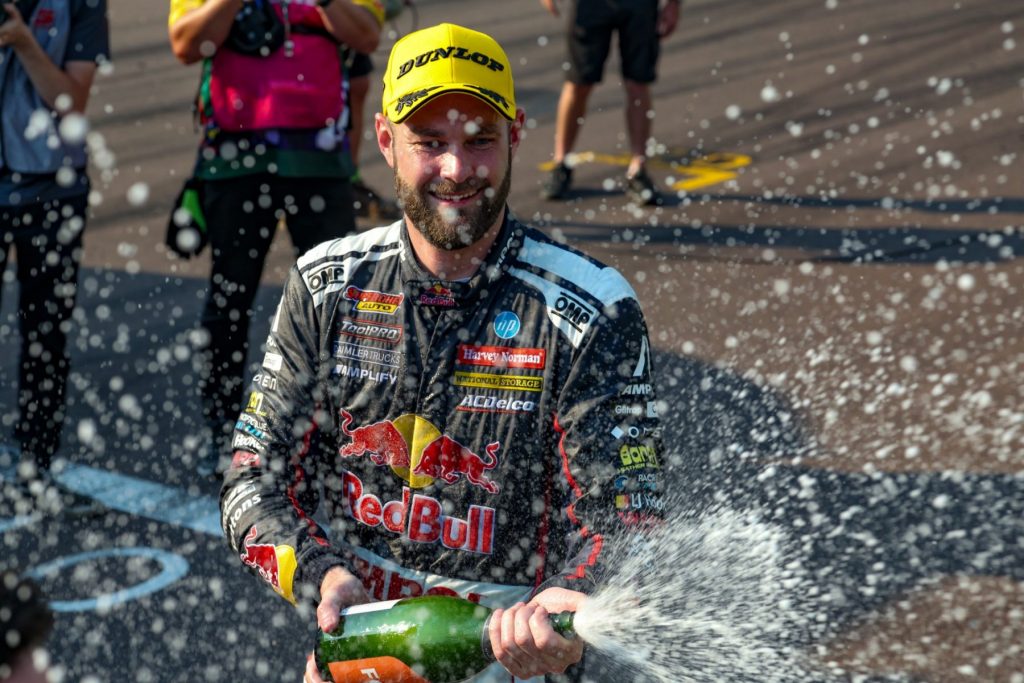 As the red lights dimmed it was van Gisbergen who held a slight advantage as he crept across to cover the inside line that he had used to great effect in Race 12. Mark Winterbottom tried to sweep around the #97 mid track on the apex of Turn 1, while Jamie Whincup tried to do likewise on the outside of the Irwin Racing machine. The trio ran three wide for a brief second before Whincup eased back as De Pasquale held third on the inside line. Winterbottom found little grip at the exit o the corner and dropped places to De Pasquale and then Davison.

The field had largely settled by the end of the opening lap with van Gisbergen just shy of a half second lead over Davison with De Pasquale a further 3/10ths further back. The gaps throughout the top 10 were fairly consistent with Winterbottom in 4th, just ahead of Whincup, Mostert, Brown, Waters, Percat and Le Brocq.

Wild card drivers Thomas Randle and Kurt Kostecki both had moments during the early stages of the race. Randle ran wide at the exit to Turn 5 and lost positions as he scrambled the Tickford Racing Castrol Mustang across the grass and back onto the bitumen, while Kurt Kostecki hit the rear of Zane Goddard on the approach to the Turn 6 hairpin, which spun the Yellow Cover Commodore. Kostecki received a pit lane penalty for what was the only incident of note throughout the race.

The compulsory pit stops commenced around lap 7 of 38, with De Pasquale the first of the front runners to make his visit to the pitlane in an effort to undercut van Gisbergen, who had edged out to a 2 second lead. Instead of gaining track position, De Pasquale found himself down a place to Chaz Mostert. Whincup was the last of the lead group to make his stop and returned to the track in 4th place, marginally behind Mostert. He closed onto the rear bumper of the Mobil 1 Appliances Online WAU Commodore.

By Lap 34 the fight for 3rd had become a three-way battle with Mostert the incumbent, while Whincup had been joined by Winterbottom in the quest for the final podium position. Whincup ranged up the inside of Mostert at Turn 1 but ran wide at the exit. Mostert attempted a switch back at the exit of Turn 2, with the duo side-by-side through Turns 3 and 4. Whincup finally claimed third place with a final decisive move at Turn 5. Mostert then came under attack from Winterbottom and De Pasquale during the final laps of the race but managed to hold on to 4th to the finish.

Davison and van Gisbergen once again lined up on the front row for the final race of the Merlin Darwin Triple Crown with Anton De Pasquale and Jamie Whincup on row 2. As the race commenced it was once again van Gisbergen who got the jump off the line, this time with an even better start which saw the #97 well clear well before the first turn. Whincup tried to move around the outside of both Shell V-Power Mustangs at Turn 1, only to find himself hung out to dry on the astro turfed run off and lost places to James Courtney, Nick Percat and Scott Pye.

Macauley Jones had qualified well up the order only to see his race fall apart after contact with Fabian Coulthard saw the Coca Cola sponsored BJR Commodore spin at the exit of Turn 6 and nudge the armco barriers. Andre Heimgartner also made an unexpected visit to the pits after a sudden loss of power saw the NED sponsored Mustang trail the field.

Mark Winterbottom was amongst the first to complete his compulsory stop when the pit window opened on lap 6. The rest of the lead group made their stops by the mid point of the race, with Scott Pye the last to make his visit to the pit lane deep into the final laps of the race. Anton De Pasquale dropped outside the top 10 after a misjudged passing move on Mark Winterbottom saw the Shell V-Power Mustang take to the grass at Turn 1 on lap 16.

Once Pye peeled off into the pit lane it was van Gisbergen who returned to the head of the field from Davison, Whincup, Mostert and Courtney. They went on to finish in that order with Percat, Winterbottom, Waters, Slade and Brown completing the Top 10. Thomas Randle held off De Pasquale for 11th while David Reynolds weekend went from bad to worse after contact with Todd Hazelwood and Jack Le Brocq saw the Penrite Mustang spin at the exit of Turn 6 and finish the race in 20th position.

“Right from this morning you could tell there was an increased presence in the garage,” Shane van Gisbergen told Red Bull Ampol Racing Media. “We were hungrier than ever after some not-so-good results yesterday. Everyone just wanted to have a good day. We had our problems fixed from yesterday, and everyone was super focused. Right from the team briefing this morning, we made good calls on the car, which really helped us all day. We didn’t quite have the speed of Will (Davison) in qualifying, but I knew our car would be good during the race. The racing was all about the start and I got three good starts all weekend which is surprising for me – it’s something I need to keep up. Overall, it was an awesome day for the team with a few wins and a few podiums, and a great day for our team points.”

Shell V-Power Racing’s Will Davison was not pleased to see two pole position starts end with a pair of second place finishes.

“I sort of feel good that I’m angry. Not angry, but it’s just great to be back in this position,” Will Davison said to Shell V-Power Media. “It’s a tough game being up against the quality of our opposition. I’m loving it. Loving the challenge.

It was a very rewarding morning after a really tough day yesterday. But all-in-all, the year’s been really encouraging, and we’re still learning all the time. We worked really, really worked hard last night. I didn’t sleep much because I had such a bad day, and I was just a bit unsure what was going to happen this morning. It’s very rewarding when you hook the car up and nail a couple of poles.

I just couldn’t quite match Shane off the line. It’s as simple as that. I mean, I think the pace of the car was pretty strong all day, but it was tough in the dirty air. There was nothing between us, but track position was really key at the start.”