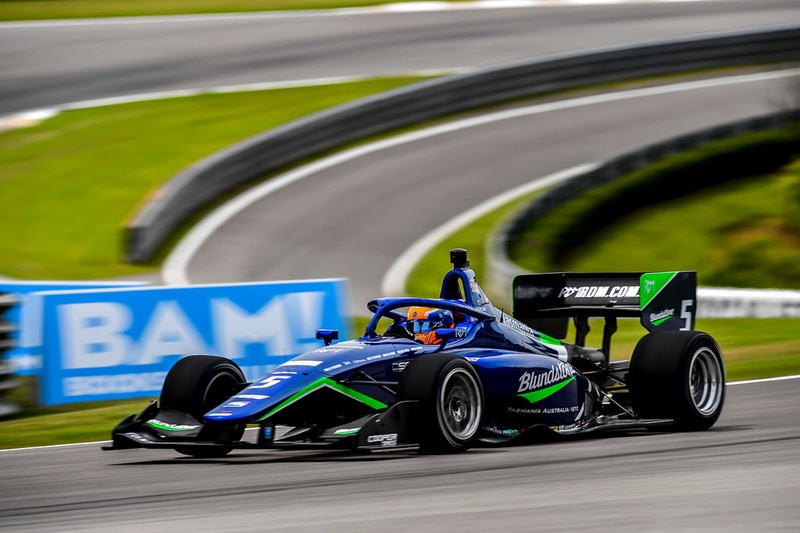 Lundqvist, the 2018 BRDC British Formula 3 champion and 2020 Formula Regional Americas Championship powered by Honda winner, had the pressure eased somewhat on the pening lap after David Malukas found the barriers at turn1 after contact from Kyle Kirkwood. The incident led to a dnf for Malukas, while Kirkwood went to the pitlane to replace a damaged front wing..

Lundqvist immediately gapped the field at the restart racing 1.6 seconds clear of his Danish-born teammate, and thereafter stretched his lead slowly but surely before taking the checkered flag 5.3517 seconds ahead of Pedersen.

DeFrancesco profited from the incident then moved into podium contention when Toby Sowery slid wide at the exit of turn 6. DeFrancesco’s performance earned him the Tilton Hard Charger Award.

Sowery recovered to finish 4th and  Alex Peroni 5th on the Carlin team’s return to Indy Lights for the first time since 2017.

The second round of the championship will see the green flag tomorrow at 12:20 p.m. CDT, immediately prior to the headline event, the Honda Indy Grand Prix of Alabama, the opening round of the 2021 NTT INDYCAR SERIES.

Provisional championship points after 1 of 20 races:

AUDIO: HUNTER MCELREA ON HIS WIN IN INDY PRO 2000 AT BARBER PARK