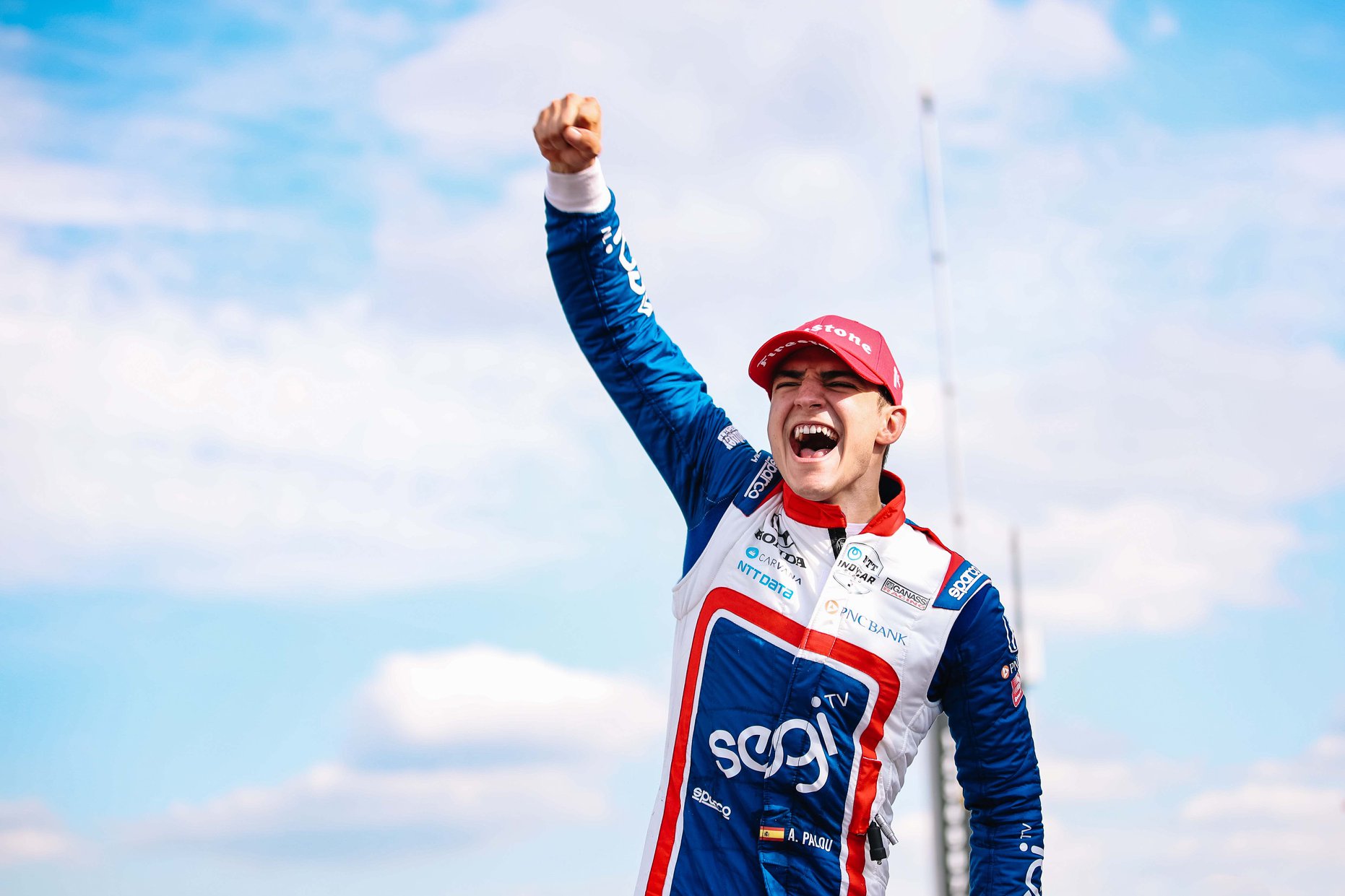 When Alex Palou sits back and soaks in the Honda Indy Grand Prix of Alabama presented by AmFirst, he can take special satisfaction in knowing he took his first career NTT INDYCAR SERIES victory the old-school way.

Palou held off legends Will Power and Scott Dixon – who have seven series titles and two Indianapolis 500 victories between them – to win Sunday afternoon at Barber Motorsports Park in his debut with reigning series champion Chip Ganassi Racing. Palou held off a charging Power by 0.4016 of a second – the closest margin of victory in the history of this race – to take the checkered flag in his No. 10 SEGI.TV Chip Ganassi Racing Honda.

“We did it!” Palou said. “It’s amazing. All of the team did an amazing job. We had the best cars. We’re starting strong, and we’ll keep it strong.”

NTT P1 Award winner and pole sitter Pato O’Ward finished fourth in the No. 5 Arrow McLaren SP Chevrolet, 3.9741 seconds behind Palou as a fascinating duel between series legends and young stars unfolded over the closing laps on the 17-turn, 2.3-mile circuit.

Sebastien Bourdais rounded out the top five after starting 16th in the No. 14 ROKiT AJ Foyt Racing Chevrolet.

The race, held under sunny skies and before a capacity-allowed crowd of 20,000, developed into a clash of strategies for the first 70 laps. Palou, Power, Dixon and Marcus Ericsson were among the leading lights who opted for a two-stop strategy, while O’Ward, Bourdais and Graham Rahal were among the contenders who chose a three-stop strategy.

Two stops became the golden ticket, as Palou, Power and Dixon ended up on the podium. But once each of the contenders had made their final stops, regardless of strategy, the race became a contest of brilliant driving and deft usage of Push-to-Pass, not a game of clever fuel mileage calculations on the pit box.

It was the best of both worlds of INDYCAR.

Over the closing laps, Power began to nibble at Palou’s lead through pace and more available Push-to-Pass in his No. 12 Verizon 5G Team Penske Chevrolet.

The gap evaporated to 1.8038 seconds on Lap 83 of 90, with Power having nearly twice the Push-to-Pass seconds in his firesuit pocket as Palou. The Spaniard had the further complication of dealing with the turbulence from the rear wing of the No. 20 U.S. Air Force Chevrolet of Conor Daly, who was just ahead of him and racing to stay on the lead lap.

Power closed to within 1.1160 seconds with two laps to go, but Palou padded that margin to 1.8311 seconds at the white flag and staved off everything Power had over the final lap for victory.

“I made one little mistake in (Turn) 9, but with the amount of Push-to-Pass I had left, it could have been pretty good,” Power said. “We had to save some fuel, but I had enough to use Push-to-Pass the last two laps.

“It just blew my mind how fast Alex was in that first stint. I had absolutely nothing for him. He just pulled away, so I figured he was on a three-stop race. I was getting the best lap time I could for the fuel number.”

Said Palou: “It was one of those days when everything went well. We had good fuel mileage, good tire management and good pace.”

Palou’s early fast pace after starting third helped him build a lead of 6.6 seconds shortly before his first pit stop on Lap 31 and a gap of 8.4 seconds on Lap 49. His average speed was 110.025 mph in a rapid race that featured 10 lead changes and just two caution periods for eight laps.

One of those cautions occurred on the first lap.

All the drivers involved in the incident were unhurt, but Newgarden and Hunter-Reay were eliminated.

“I got loose coming over the hill,” Newgarden said. “I thought I had the car and touched the grass, and I think once I touched the grass, it pitched me sideways. I feel really bad for anyone that got involved in that. Obviously, my mess created a bigger mess.”

Fellow rookie Romain Grosjean finished 10th in his series debut in the No. 51 Nurtec ODT Honda, while rookie Scott McLaughlin placed 14th in the No. 3 PPG Team Penske Chevrolet.

AUDIO: HUNTER MCELREA ON HIS WIN IN INDY PRO 2000 AT BARBER PARK