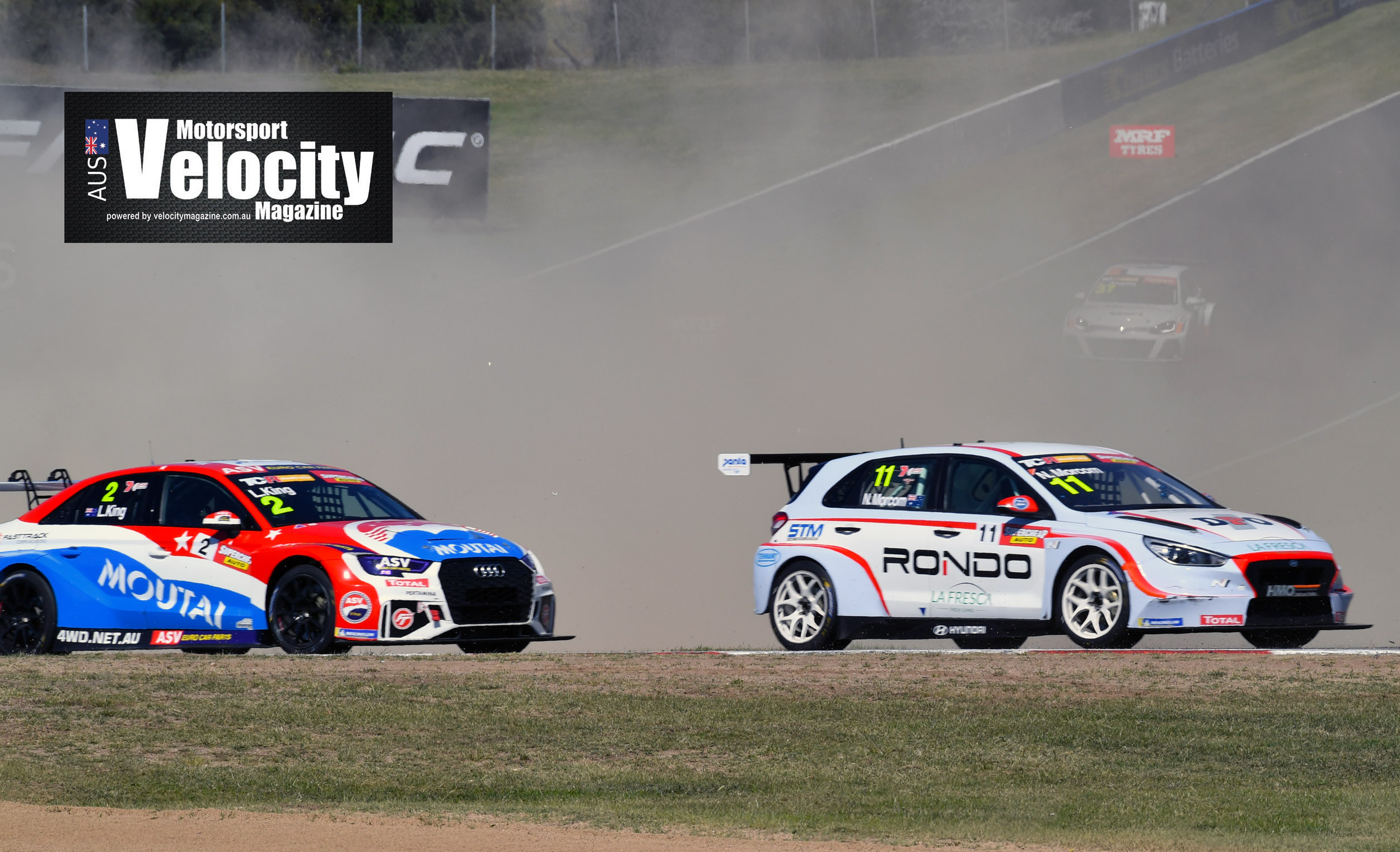 HMO Customer Racing rounded out the weekend at the Hi-Tec Oils Bathurst 6 Hour with top 10 finishes for both Nathan Morcom and Josh Buchan, while Duvashen Padayachee finished an excellent 12th on debut with the Hyundai i30 N TCR.

All three drivers made strong starts to the final race of the weekend as the field jostled for position in the run towards Hell Corner. Josh was caught behind a slower car on the run up the hill and dropped a place, while Nathan ran around the outside at turn 1 and was momentarily forced onto the grass but managed to gain the inside line for Griffin’s Bend and gained track position. 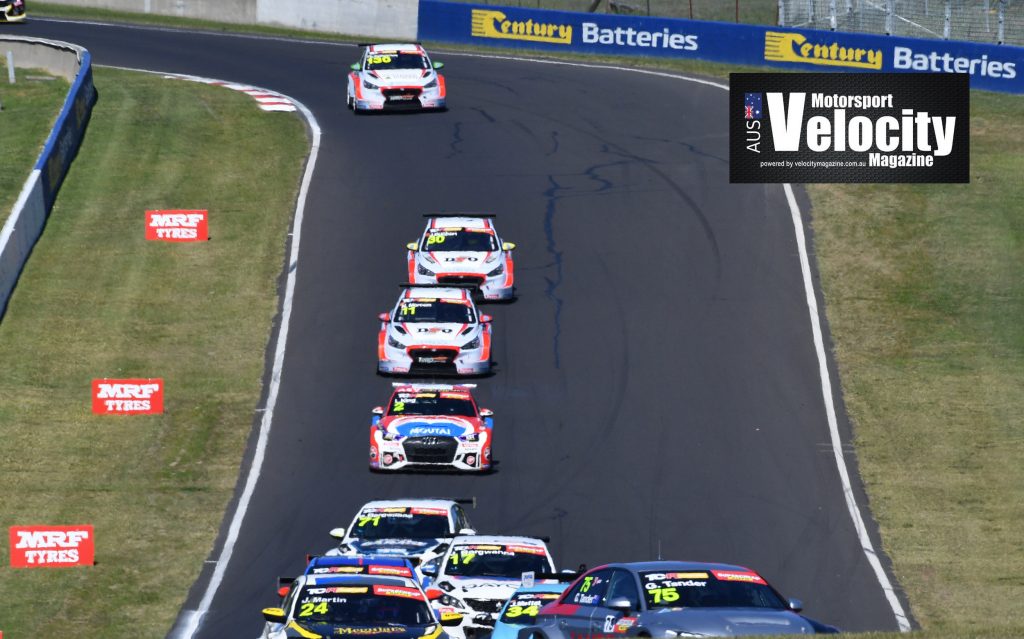 SEE ALL OF OUR BATHURST 6 HR PHOTOS HERE 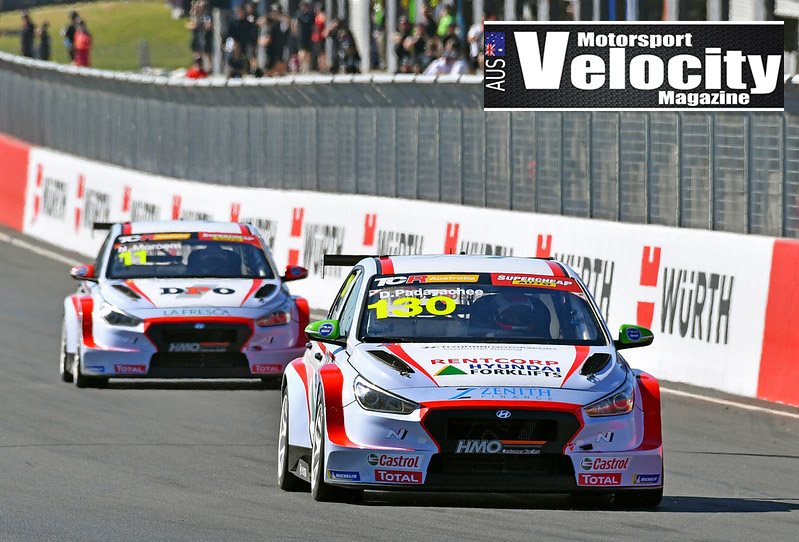 The race was neutralised a short time later as track marshals attended to the smoking Alfa Romeo of Lee Holdsworth. Racing eventually resumed for a matter of moments before Tony D’alberto was forced into the sand trap at turn 1.

In essence the 10 lap race became a couple of short sprints punctuated by caution flags and
Safety Cars. Nathan Morcom and Josh Buchan had climbed into 9th and 10th respectively when the chequered flag fell. Duvashen Padaychee had run most of the race in the wheel tracks of Buchan only to lose 11th place to Jay Hanson with the finish in sight.

”I got a good start in race 3. When everyone began to check up on the left I decided to go around the outside, which is always a fifty-fifty chance. This time if paid up for me, though there was somebody who got a bit loose and checked up on the exit of Hell Corner. They lifted off the throttle, while I kept my foot to the floor and put some wheels on the grass. I kept up my momentum and passed a few cars on Mountain Straight. I was closing in on the guys in front when the Safety Car came out. The car was really switched on even though we probably went a little too low on tyre pressures. Our aim was to maintain the tyre life for later in the race as we had some wear issues in  race 2. We still managed to pick off a few cars int the early stages of the race which was a real positive for us. We then had a second Safety Car and I caught Luke King at the Chase.

I’m really looking forward to the next round a Sydney Motorsport Park. It’s our home circuit and we should go well there.”

“Race 3 was a bit of a non-event for us really with the two Safety Cars. We got a good launch off the line but got shuffled a. bit into the first turn and lost some spots in the opening lap. In clear air the car was super fast across the top of the mountain and we were one of the quickest in sector 2. Unfortunately there’s not to much you can do with a single lap of racing and that was the story of race 3. We had good restarts and I could take some ground from Nathan on the straights, which was a nice change. It was the first time I slipstreamed a car this weekend!

Personally, I feel like I drove the car well this weekend and was the fastest of the Hyundai i30 N TCR cars. Bob, my race engineer, and I made some calls over the weekend to improve the car. Those calls turned out to be the right decisions and that is a positive in developing that synergy between a driver and his engineer. As much as this was a ‘missed round,’ there are still positives to be taken from the weekend.

Sydney should be good, but I’m not completely sure. It is my home track and probably my favourite of the ones we get to visit. Let’s wait and see where the HMO Customer Racing cars end up.”

“Race 3 was a lot better for us. I went forward, made up some spots and got to do some racing again. So, overall it was a good finish to the weekend. It’s just a shame that we had the red flag in qualifying and it would have been nice to start the weekend in the same manner. Hopefully I can do a few more rounds of the Supercheap Auto TCR Australia series.

My goal was to finish in the top 10 and I went close. Qualifying and then stalling in the first race didn’t help and I then spent the rest of the weekend just trying to chip away and learn something along the way. If we had been further up the field after qualifying then the top 10 finish was definitely achievable. We will just have to see what we can do about Sydney Motorsport Park next month.”