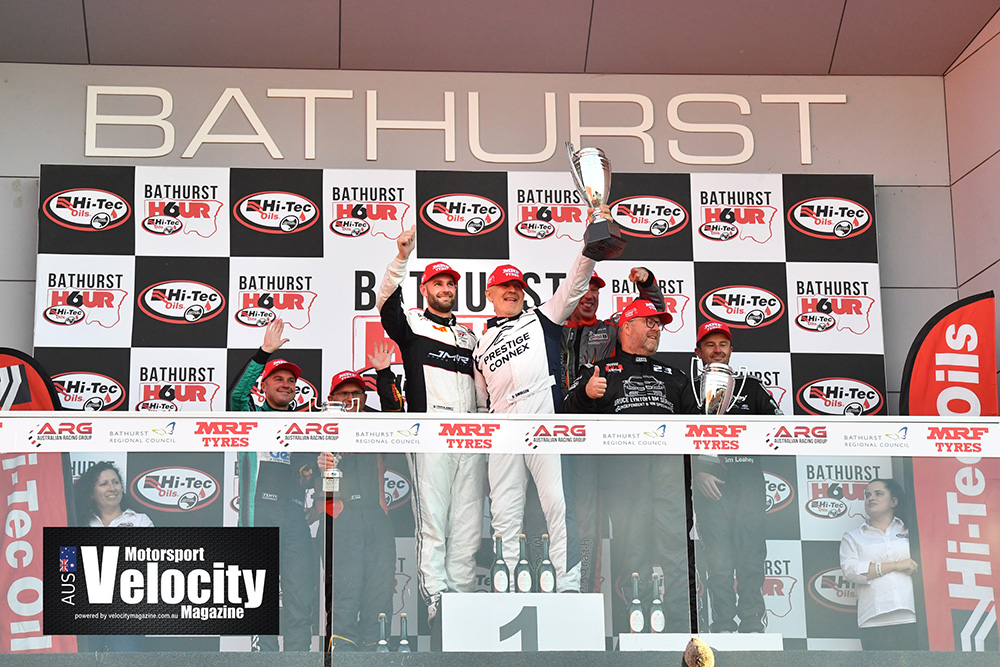 Shane van Gisbergen has written himself into the record books, scoring victory with Shane Smollen and Rob Rubis in the Hi-Tec Oils Bathurst 6 Hour at Mount Panorama yesterday.

The victory for van Gisbergen in the Prestige Connex BMW M4 makes him only the second driver in history to win the Bathurst’s three iconic endurance events – the Bathurst 1000, 12 Hour and now the 6 Hour production car race.

Van Gisbergen joins Paul Morris as the only other driver to achieve the feat.

It was an all BMW M4 podium, with Tim Leahey and Beric Lynton finishing second and Grant Sherrin and David Russell home third.

The remarkable feat came in a challenging day that saw the team overcome a 5-second penalty and numerous restarts throughout the race before claiming victory.

“It’s awesome to be part of this team [with] Shane Smollen and Rob Rubis,” van Gisbergen said.

“What an awesome day. It was a bit tricky in the beginning, we thought we were losing but we took the pain of the CPS early and it worked out great. At the end I knew I had the five-second penalty and I just pushed like anything.”

For life-long friends Smollen and Rubis, claiming a Bathurst victory together was something of a dream.

Smollen, an experienced GT and Porsche racer, was full of praise for van Gisbergen’s significant contribution to the victory – beyond just his talent behind the wheel.

“But his preparation, his thought and his time he has put into this despite his other engagements was enormous. The strategy was basically his strategy, he really cared, and it showed.

In a race filled with 11 Safety Car periods, the race ebbed and flowed throughout as the leading contenders completed their allocations of compulsory pit stops across the day.

The race was a tense strategic battle throughout with a clear order only really unfolding in the final 90 minutes following the final round of pit stops.

After earlier dropping a lap due to an unscheduled stop, the Carr Motorsport BMW M4 found themselves leading after a day-long comeback drive by Brad Carr and Tim Slade.

Cruelly, the car was forced to pit immediately thanks to a right-front puncture, dropping them to the tail end of the lead lap and handing the lead to van Gisbergen, who along with Rubis and Smollen had ensured the #97 remained in the mix throughout the race.

The next challenge for the ultimate winners came on account of an earlier 5 second penalty for a Safety Car restart infringement, ensuring van Gisbergen needed at least that margin to be assured of victory.

After setting the race’s fastest lap on the 105th tour and withering pressure from defending winner Tim Leahey, the Kiwi ultimately pulled away to win by just under 10 seconds.

A close battle throughout the day was won by the Garth Walden Racing Mercedes A45 AMG driven by Marty Sheargold, Brett Hobson and Oliver Shannon, the trio finishing 7th outright after a somewhat under-the-radar performance throughout the day.

Second went to the Salmon, Shahin and Muston Mercedes while the Jimmy Vernon / Mark Griffith Mitsubishi completed the top three.

A2 was a battle of the Mustangs and was ultimately won by George Miedecke, Paul Morris and Brodie Kostecki, who also claimed fifth outright after a challenging day.

The squad battled overheating issues and damage to the front splitter of the car, as well as fumes affecting both Miedecke and Kostecki late in the race. With Morris behind the wheel, the car came back from a long way down to claim their class victory by a little over three seconds.

Second was the Colbey Cowham / Lindsay Kearns Mustang, which at times led the race outright, while third went the way of the Tony & Kyle Alford Mustang on it’s Bathurst debut.

The iconic BMW clocked up 20,000km of Bathurst racing kilometres during the race.

B2 went the way of the Race Academy International Commodore of Matt Forbes-Wilson, Ashley Seisun and Michael Ferns.

After close fights early in the race, Class C ultimately went the way of the Osborne Motorsport Renault Megane of Josh Haynes and Kaide Lehmann by a full lap, with the Westwood / Gillis BMW M3 second in class.

The battle in the Production Car category (Class D) was intense across the duration but ultimately fell the way of teenagers Lachlan Mineef and Tom Sargent, who finished an outstanding 15th outright in their Toyota 86GTS.

Class E was won by the Road to Bathurst Mazda team entry driven by Wilson/Gilroy.

The winners completed 120 laps of the 6.213km Mount Panorama circuit, for a total of 745km of racing.

A crowd of over 15,000 attended the 2021 Hi-Tec Oils Bathurst 6 Hour event, staged in perfect conditions throughout the Easter long weekend.

Shane van Gisbergen has carried his winning form into production cars with victory in the Bathurst 6 Hour.

The Red Bull Ampol Racing driver combined with Shane Smollen and Rob Rubis to claim the win aboard a Class X BMW M4.

Van Gisbergen claimed a maiden Bathurst 1000 victory alongside Garth Tander last October, four years after he won the Bathurst 12 Hour, a day after he also broke the lap record around the circuit.

The 2016 Supercars champion also defeated Tander and Supercars rival Chaz Mostert in the opening Fanatec GT World Challenge Australia Powered by AWS on Saturday, before being pipped by Tander on Sunday morning.

The current Repco Supercars Championship leader claimed pole for Sunday’s six-hour race, but was forced to overcome a five-second time penalty in the final stint.

Another of van Gisbergen’s fellow Supercars drivers, Tim Slade, finished fourth overall alongside Bradley Carr, with their #8 BMW M3 missing out on victory after a number of issues in the race.

Critically, Slade had to pit from the lead with just over an hour to go after a tyre issue.

Morris previously won the Bathurst 12 Hour in 2007 and 2010, before winning the Great Race alongside Mostert in 2014.

Sunday’s result marked another key success for van Gisbergen, who is continuing his recovery from a broken collarbone sustained early last month.

Just over two months ago, he took victory in the New Zealand Grand Prix at Hampton Downs.

“Just gotta thank the team; it’s awesome to be part of this team,” van Gisbergen told the broadcast.