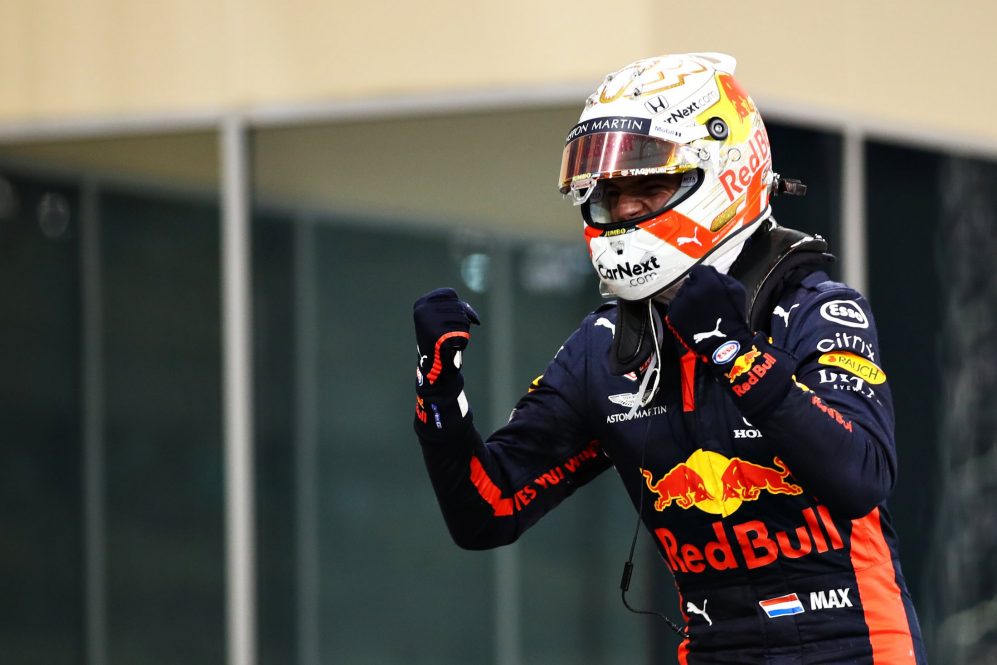 Max Verstappen capped off a near perfect weekend for the Aston Martin Red Bull Racing team with victory at the season ending Abu Dhabi Grand Prix. 2020 was almost the year that never was as COVID-19 wreaked havoc upon the world. Somehow Formula One managed to cobble together a world championship season, darting around viral hotspots with ‘biological bubbles’ and a regime of constant testing to ensure a sterile environment for the sport’s elite. COVID19 infiltrated the secure perimeter on more than one occasion and eventually found its way into the 2020 champion elect, a factor which played heavily on the result of the 2020 Abu Dhabi Grand Prix.

“Physically I don’t think I’ve ever been so blown, my body was not great,” Lewis Hamilton told Sky Sport, having returned to racing after finally clearing the traces of COVI19 from his system.  “I didn’t think any time last week I’d be here so I’m just truly grateful to be alive and here. Looking forward to getting back to training.

As the cars made their way from the garage to the grid a variety of race strategies become clear. Verstappen, Bottas, Hamilton and Sainz were all on the medium compound with the goal of longer opening stints to their race, while Norris, Albon, Kvyat, Stroll and Gasly ran the softer compound. Yellow walled medium tyres were the choice of most, with one notable exception. Renault had elected to mix strategies with Ocon on medium tyres and Daniel Ricciardo set to start on the hardest tyre.

Verstappen immediately moved left to cover Valtteri Bottas as the lights went out to signal the start of the Abu Dhabi Grand Prix and led into turn 1. Bottas had been marginally slower off the line and seemed to impede those behind as Verstappen streaked away at the front. The lead had blown out to 1.5 seconds by the end of the first lap, which rather surprisingly became the first time that Max Verstappen had actually led the Abu Dhabi Grand Prix for an entire circuit of the course. The rest of the field had been relatively subdued with Magnussen the biggest mover amongst a relatively stagnant situation. The Haas driver had gained 3 places to sit in 17th, whilst the others had either remained in their starting position or moved one place in either direction.

At the start of lap 2 it was Verstappen from Bottas, Hamilton, Norris, Albon, Sainz, Kvyat, Stroll, Ocon and Gasly. Ricciardo had dropped a place to Vettel as the harder tyre struggled for initial grip, but had regained the place later in the lap. By lap 7 Verstappen’s lead had almost doubled, with the Dutch driver already in control of the race. The usually dominant Mercedes appeared to have no reply with Bottas second and spearhead Lewis Hamilton 3rd, unable to pressure his teammate and over 6 seconds from the lead. Ricciardo moved ahead of teammate Ocon and into the top 10 at the bequest of the team, while Norris and Sainz looked comfortable in 5th and 6th respectively.

A full caution period was triggered by Sergio Perez, when his Racing Point stopped on track with what was reported as a loss of power on lap 10. An initial Virtual Safety Car was soon changed to a full Safety Car period in order to recover the motionless car.

“I’m really sad that my final race with the team ended so early and with a repeat of the engine problem we had in Bahrain,” Perez reported to Racing Point Media. “I really wanted to sign off with a strong race for everyone in the team. I hope people remember winning the Sakhir Grand Prix instead of this weekend!”

It brought a flurry of action to the pit lane with stops with the top 3 all stopping for tyres to cover one another. It was a move that did not sit too well with Hamilton in particular, who questioned the wisdom of the early stop for the hardest tyre. Ricciardo had stayed out and jumped to 5th as did Ferrari with Vettel and Leclerc now 7th and 8th, splitting the two McLaren entries.

The race resumed at the commencement of lap 14 with Verstappen quick to once again establish his ascendency over the Mercedes duo. By lap 16 the gap had grown to 1.5 seconds to Bottas, with a similar margin to Hamilton in 3rd. Ricciardo remained in 5th, 3 seconds behind Albon in 4th and out of DRS range ahead of Norris in 6th. The pattern was repeated throughout the field with cars close to, or just out of that important 1 second gap to the car ahead.

By half race distance the ship had sailed for Mercedes with Verstappen 5 seconds up the road from Bottas and Hamilton. Albon was a further 6 seconds behind with a further 13 seconds to Ricciardo in 5th. The Australian’s hard tyres had completed 26 laps, but he reported to the team that they were still feeling good with no need to stop at that time. Carlos Sainz was under investigation for impeding Lance Stroll prior to his pit stop. The review significant for both Mclaren and Racing Point with both teams arguing over third place in the Constructor’s Championship and the millions of dollars in prize money as well as the esteem that went with the result.

Ricciardo was the last runner to pit on lap 40 and returned to the circuit on medium tyres in 7th place. He was safely ahead of Gasly in 8th, but realistically too far behind Sainz or Norris to progress any further. It was the pattern throughout the field as the 19 remaining runners pounded out the final 10 laps of the 2020 season.

Another record looked set to fall the way of Verstappen as he cruised towards victory having led from start to finish from pole position with the fastest lap of the race making him the youngest driver to achieve that feat. He had the triple feat within sight until Daniel Ricciardo produced a late charge to record the best lap of the race in his final drive for Renault. It wasn’t the first time that Ricciardo had stolen Verstappen’s thunder and perhaps won’t be the last either.

“It has been a very enjoyable two days which we didn’t really expect coming into the weekend. Being on pole was already great but to win here is a perfect end to the season for us all. The tyre management was good and the car had a nice balance which made it very enjoyable to drive. I expected a very tough fight today but I think we managed everything very well and there was never really a moment where I felt under pressure which is a pretty good feeling. To finish the year off like this I’m of course very happy with and I just hope we can start next season competitively, so we can be there right from the start, as we want to be able to try and fight for the championship but for that we need to start strong. Everyone in the Team and at Honda has worked so hard the whole year to improve the car and this is a really good boost going into the winter and I hope everyone gets to celebrate tonight,” Verstappen reported to Red Bull Media.

“You can’t win them all. Considering the past couple of weeks I’ve had I’m really genuinely happy with that,” Lewis Hamilton said to Sky Sports. “I was not perhaps 100% – congrats to Max that was a really hard race physically for me, and a big big thankyou to the team for their continue support – it’s still fantastic to get two podium places here. It’s a fantastic job to see Alex [Albon] right up there with us in a two-team battle – that’s what this sport needs.”

As the curtain came down on the 2020 Formula One World Championship so did the F1 careers for a number of drivers, including Sergio Perez, Kevin Magnussen and Romain Grosjean. Relationships also came to an end with Ricciardo moving to McLaren, Vettel to Aston Martin ( the rebranded Racing Point) and Sainz completing the swaps at Ferrari. There were also changes in garage allocations with McLaren moving ahead of Racing Point as the third most successful team in 2020, while Ferrari plummeted to 10th, their worst position in close to 40 seasons of Grand Prix racing.

What will 2021 look like? One can only hope it will be more normal in a year now characterised by terms such as ‘fluidity’ and ‘new normal’. An ambitious calendar lists Australia as the opening round of Formula One’s next season and only time will tell whether 2021 sees some form of normality return to the world.