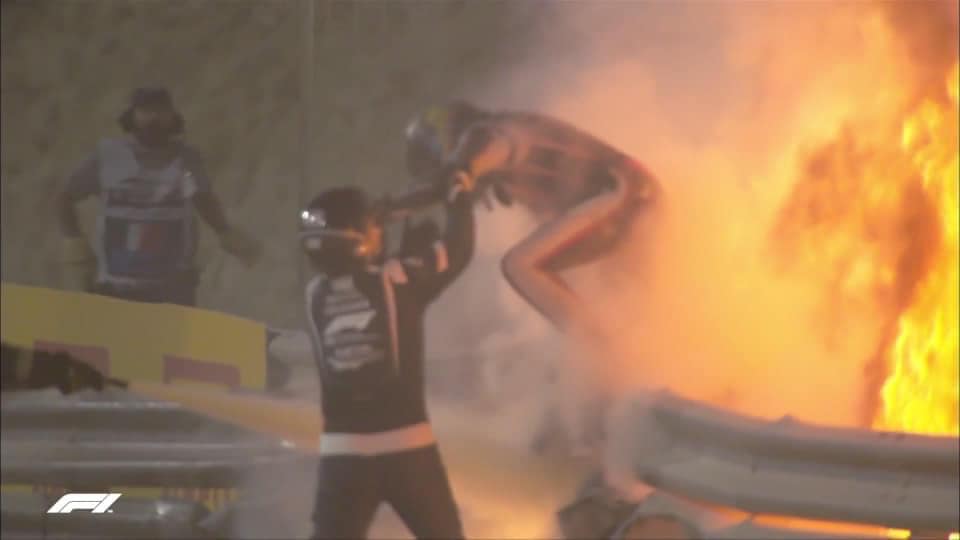 Lewis Hamilton won the Gulf Air Bahrain Grand Prix, though it was Romain Grosjean’s name that echoed around the world after a frightening crash on the opening lap of the Grand Prix.

Grosjean locked wheels with the Alpha Tauri of Daniil Kvyat at the exit of turn 3 on the opening lap of the race. The contact speared Grosjean’s Haas across the track at 221kmh and into an armco fence that jutted out at towards the racing line at a narrow angle. The Haas then tore in two as the cockpit pierced between the metal rails and wedged a hole through the fence. A fireball erupted when the fuel cell ripped on impact and ignited. Memories of Cevert and Senna came flooding back as the world stood still. Amidst the fiery wreck a helmet could be seen rising about the red hot armco as Romain Grosjean unbuckled his belts and climbed from the wreck, scrambled over the fence and fled towards the medical car. 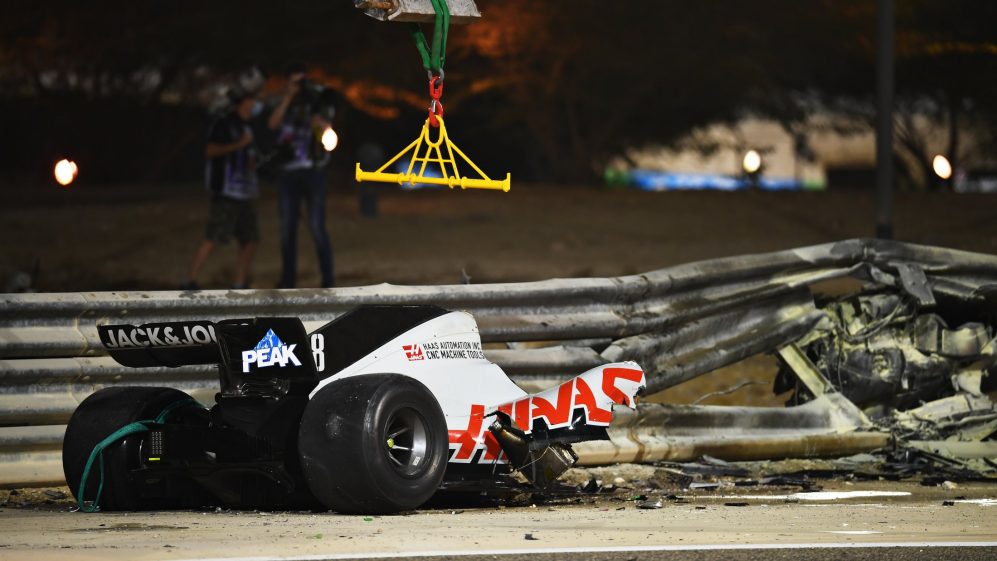 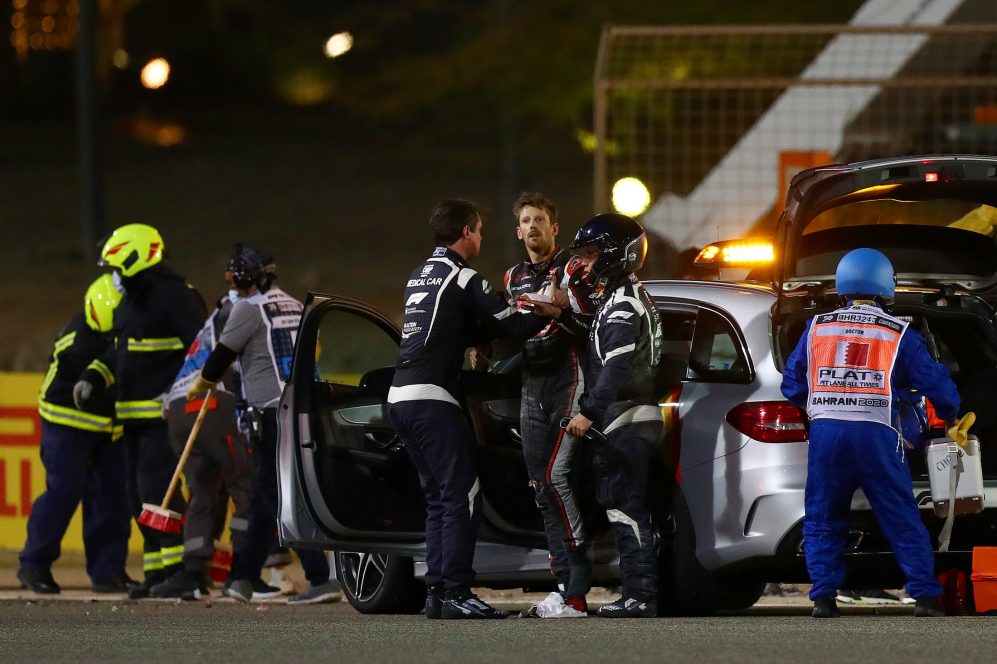 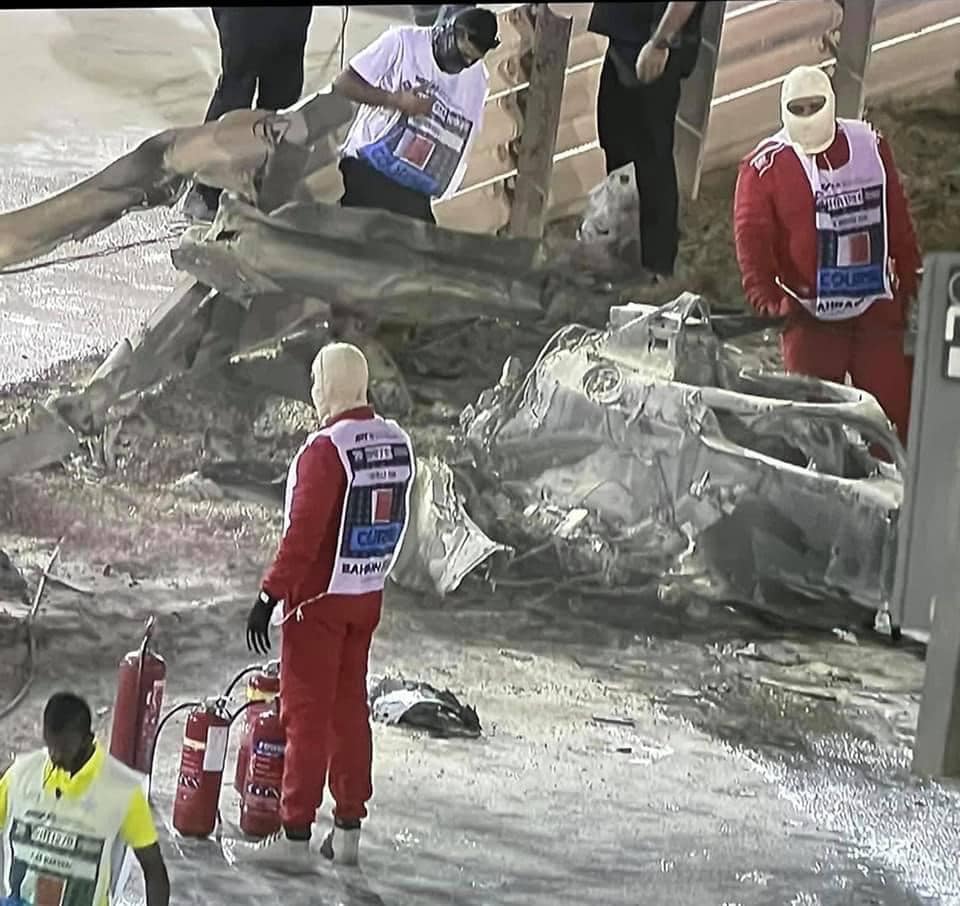 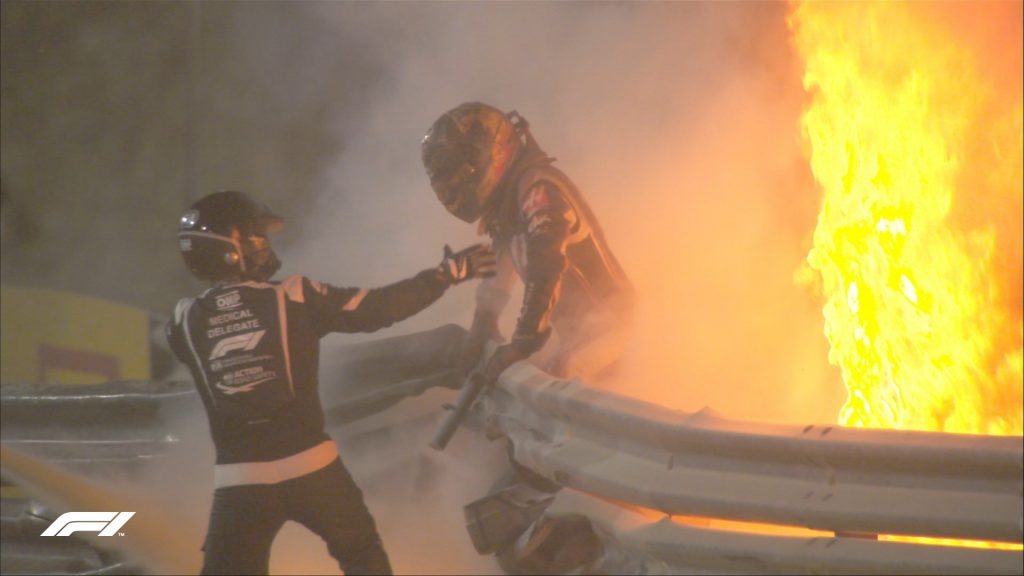 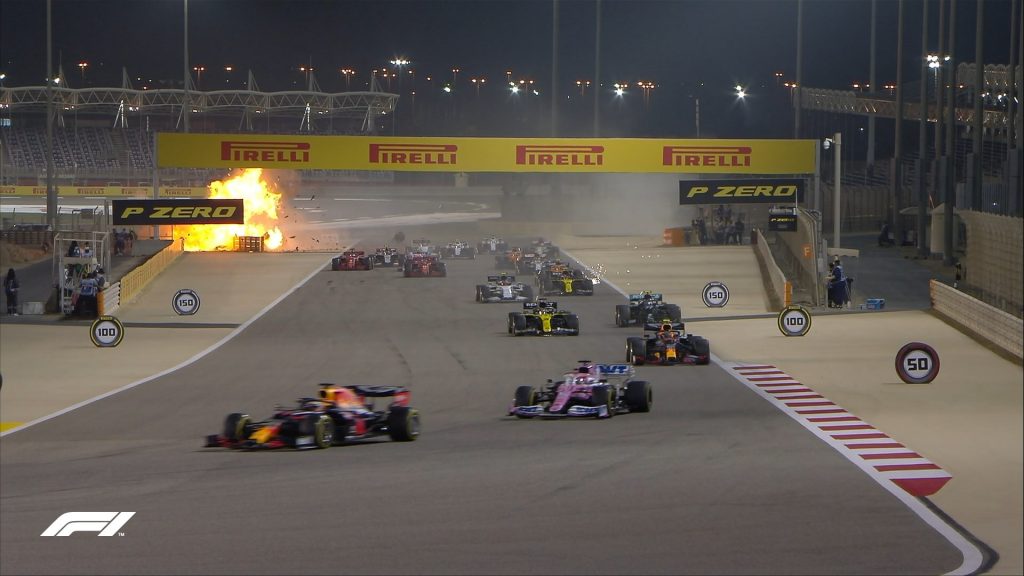 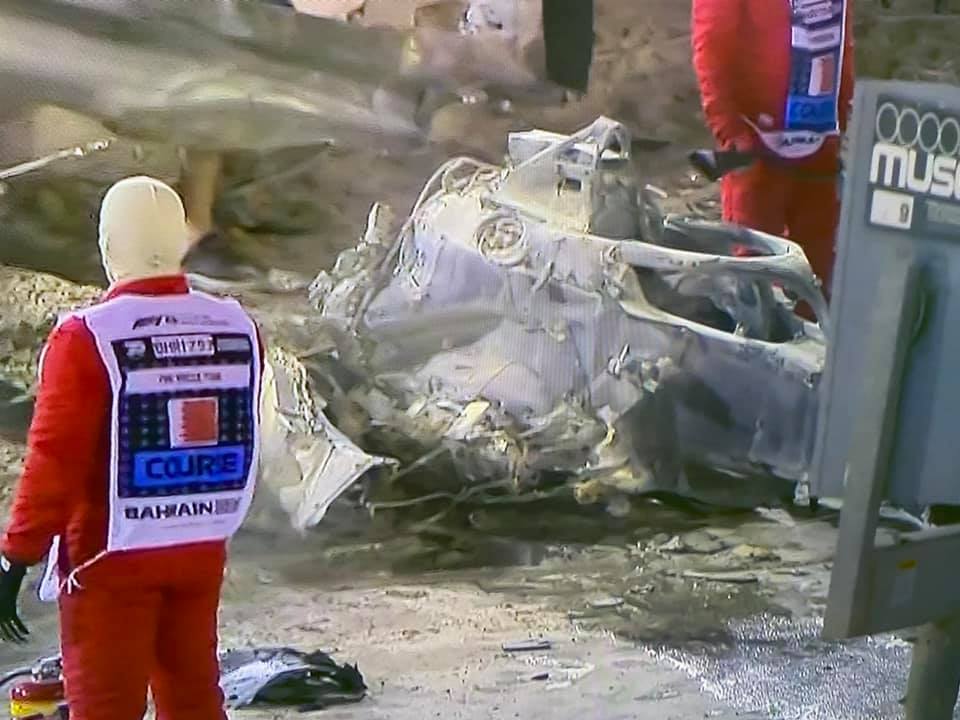 Miraculously, Grosjean had survived apparently unscathed as the race was immediately suspended. He was taken to a waiting ambulance and then airlifted to hospital for further treatment for burns and suspected broken ribs. The race remained on hold for a further ninety minutes while crews removed the wreck and replaced the damaged armco fencing.

Lewis Hamilton said: “I am so grateful Romain is safe, wow. The risk we take is no joke for those of you out there who forget that we put our life on the line for this sport and for what we love to do.”

He later wrote on Twitter: “This is a moment to recognise the work of the FIA to always make our sport safer and to salute the unstinting bravery of the marshals and medical crew.”

I’m so grateful Romain is safe. Wow… the risk we take is no joke, for those of you out there that forget that we put our life on the line for this sport and for what we love to do. Thankful to the FIA for the massive strides we’ve taken for Romain to walk away from that safely https://t.co/dG8AXmsbKN

Haas boss Gunther Steiner said: “Romain is doing okay, I don’t want to make a medical comment but he had light burns on his hands and ankles.Obviously he’s shaken. I want to thank the rescue crews who are very quick. The marshals and FIA people they did a great job, it was scary”.

Haas later released a statement which read: “Following medical evaluation by doctors at the Bahrain Defence Force (BDF) Hospital Haas F1 Team driver Romain Grosjean will remain in hospital overnight to be treated for burns sustained on the back of both hands after his opening lap incident at the Bahrain Grand Prix. All X-rays performed on Grosjean came back clear of fractures.”

The stoppage brought some respite for Valtteri Bottas, who had been under siege during the opening lap. The #77 Mercedes dropped to 6th at the opening corner after a slow get away saw Verstappen, Perez, Albon and then Ricciardo dive past the Finn. Lance Stroll and one of the Alfa Romeos were pushed off the track between turns 2 and 3 before contact between Kvyat and Grosjean stopped the race.

Around ninety minutes later, the field lined up on the grid for a second race start in what was now effectively lap 3 of the 57 lap race distance. Hamilton led Verstappen, Perez, Bottas and Albon into turn 1. The restart had not been kind to Daniel Ricciardo who slipped down to 9th behind Norris, Ocon and Gasly.

Racing was once again interrupted during the opening lap after another incident involving Daniil Kvyat, this time with the Racing Point of Lance Stroll. An ambitious inside move by Kvyat on the entry to turn 8 saw Stroll ride the front wheel of the Alpha Tauri as he turned into the corner and then flipped the pink Racing Point at low speed. The Safety Car was quickly dispatched as the F1 doctor helped Stroll crawl out from underneath his car.

Racing Point team principal Otmar Szafnauer told Sky F1: “Lance is fine. “He came on the radio and said he was okay. Just upside down and hanging by the seatbelts. But he’s fine.”

“I’m really happy that Romain was able to walk away from that crash as it was a scary one to see happen. I think all of us drivers in the pitlane had to stop for a second and reset before getting back into the car. I’m definitely thinking of him. For me, personally, I’m really frustrated by the race. We’ve scored two points since Monza and it’s been a series of incidents outside of my control that’s caused it. At one point this season we were P4 in the Drivers’ Championship and we’d had such a strong start to the year, so that makes the current situation all the more frustrating. I can’t say much about today’s incident, I was going through Turn 8 and was mid-corner when I was hit by Daniil [Kvyat] who came out of nowhere and connected with me. The crash looked worse than it was: I’m ok, and Daniil got a penalty,” Stroll told Racing Point media.

Valtteri Bottas reported a puncture as the field slowed behind the Safety Car and pitted for a replacement at the end of the lap. The race resumed on lap 9 with Hamilton ahead of Verstappen and Perez. Ricciardo had recovered some lost places and ran in 8th, while Bottas was near the tail of the field in 16th of the 18 cars still on track.  Carlos Sainz got the better of 2021 team-mate Charles Leclerc for 7th on lap 12 as the McLaren driver drove back through the field after mechanical issues saw him qualify well outside the top 10. Leclerc soon trailed the top 10 runners as a combination of a notoriously tyre hungry Ferrari and a high degradation track surface ate away at his the medium compound rubber.

By lap 27 the field were running a variety of medium and hard components tyres. Hamilton led on the mediums from the hard tyre shod Aston Martin and Racing Point of Verstappen and Perez respectively. Renault had spilt strategies with Ocon on mediums and Ricciardo on the hard compound tyre. The decision ultimately worked in favour of the Australian when he caught and eventually passed his teammate for 10th on lap 38.

After the litany of incidents during the opening stanza of the race, the second portion ran relatively incident free until lap 54 of 57. Sergio Perez had driven superbly and held a comfortable 3rd place, some 1.4 seconds ahead of Alex Albon. A rear brake issue saw the Racing Point billow with smoke before flames began to lick out from under the rear cowling. Perez continued for a short time before pulling over at a marshal’s post to have the fire extinguished.

“It’s really hard for both myself and the team to take today’s result, but in the grand scheme of things, it almost becomes irrelevant after Romain’s crash at the start. At the end of the day, it’s either one more or one less podium or trophy for me, but the important thing is that Romain is still with us and that he’s ok. I wish him all the best. It was certainly hard to get back into the car after seeing something like that, but you just have to focus and prepare for the race,” Perez reported to Racing Point media.

The stranded car brought out another Safety Car which remained on the circuit until the chequered flag, effectively ending the race. Lewis Hamilton claimed another win from Verstappen and Albon. Norris, Sainz, Gasly, Ricciardo, Bottas, Ocon and Leclerc completed the top 10.

“Firstly, I’m glad Romain is OK after the incident. The result today does not matter so much after that and it’s a bit of an afterthought. To see him escape and walk away was a relief and I wish him the best in his recovery. That’s the main thing from today. In terms of our race, it certainly wasn’t what we wanted but we gave it our best and we still managed to score points. We’ll focus on next week when it comes, it’s still to play for in the championship and we’ll come back stronger,” Ricciardo explained to Renault Sport Media.

Lewis Hamilton recounted the race and Grosjean accident to Sky Sport during the winner’s interview. “It was such a shocking image to see. When I get in the car I know that I’m taking risks and I respect the dangers that are in this sport. I posted about it while I was in that break because it’s horrifying. I don’t know what g’s he pulled but I am just grateful that the halo worked and the barrier didn’t slice his head off, it could have been so much worse. But it is a reminder to us and hopefully the people who are watching that this is a dangerous sport. That is why we are pushing to that limit and playing with that limit, but you also have to respect it. It shows what an amazing job Formula One and the FIA has done over time to be able to walk away from something like that. Of course that will be investigated and they will do a lot of work to try and make sure that doesn’t happen again. 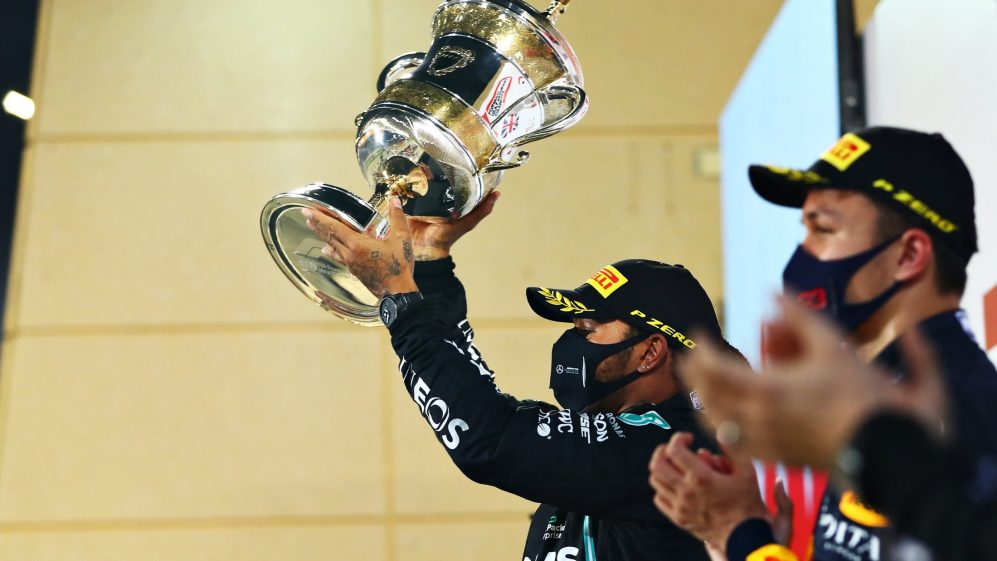 It was physically very demanding. I think that with the break we had at the beginning. You get into a mindset, you go out and get a good start and then that break we had it’s so easy to step out of the zone, that was quite tricky. They had a lots of speed today and I was flat out trying to keep them at bay. It’s physical, this track has always been physical, lots of high speed corners, so I was definitely feeling it. I was sliding out there and I wasn’t quite sure how it would play out at the end, but I’m massively grateful to my team.”