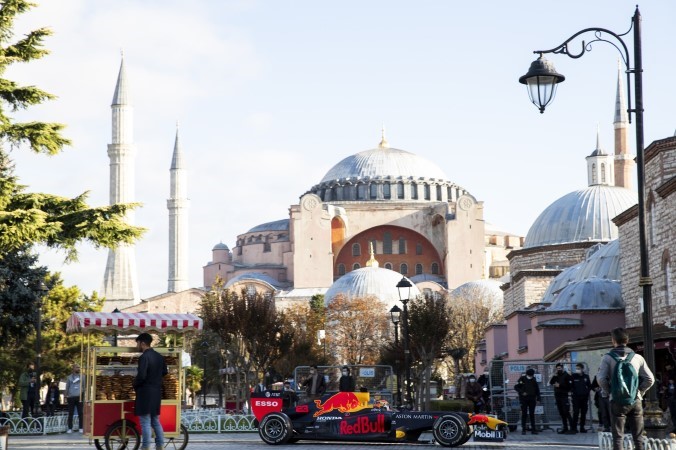 Ahead of the Turkish Grand Prix, we teased a short clip of Alex and Pierre’s trans-continental trip across Istanbul’s 15 July Martyrs Bridge in celebration of the Turkish launch of the cutting edge, premium fashion brand AlphaTauri.

Project Istanbulls captures Alex and Pierre’s tyre screeching Turkish sightseeing tour as they took to the streets in a pair of Red Bull Racing RB7s, liveried in their respective team colours, to see the city’s landmark locations.

Ticking off Turkey’s tourist hotspots, the Bulls blasted through under water tunnels, over suspension bridges and past the beautiful Blue Mosque, before meeting at the AlphaTauri fashion launch at Vakkorama.

– Seeing Istanbul means exploring two continents, so the drivers split off, creating new views of the city as cameras captured them from multiple perspectives. Their RB7 racecars turned heads as they flashed past the Topkapi Palace, Galata Bridge and Blue Mosque and drifted at Sultanahmet Square.

– During the whirlwind day trip, both cars crossed from the Asian continent to the European and back in mere moments. First was the Aston Martin Red Bull Racing car crossing under the Bosphorus Strait in the Eurasia Tunnel, before Albon and Gasly met 64 meters above the Bosphorus on the iconic 15 July Martyrs Bridge. For good measure, French driver Gasly became the first person to perform donuts in two continents at the same time.

– The show run, timed alongside the Formula 1 DHL Turkish Grand Prix, celebrated the debut of premium fashion brand AlphaTauri in Istanbul, where the collection is now available at select Vakkorama Stores. Altogether, AlphaTauri’s collection is available in almost 90 countries worldwide.

– Gasly and Albon concluded their off-track day in Istanbul by attending the AlphaTauri fashion launch, where they posed for photographers before becoming the first VIP customers to shop the AlphaTauri collection at Vakkorama.