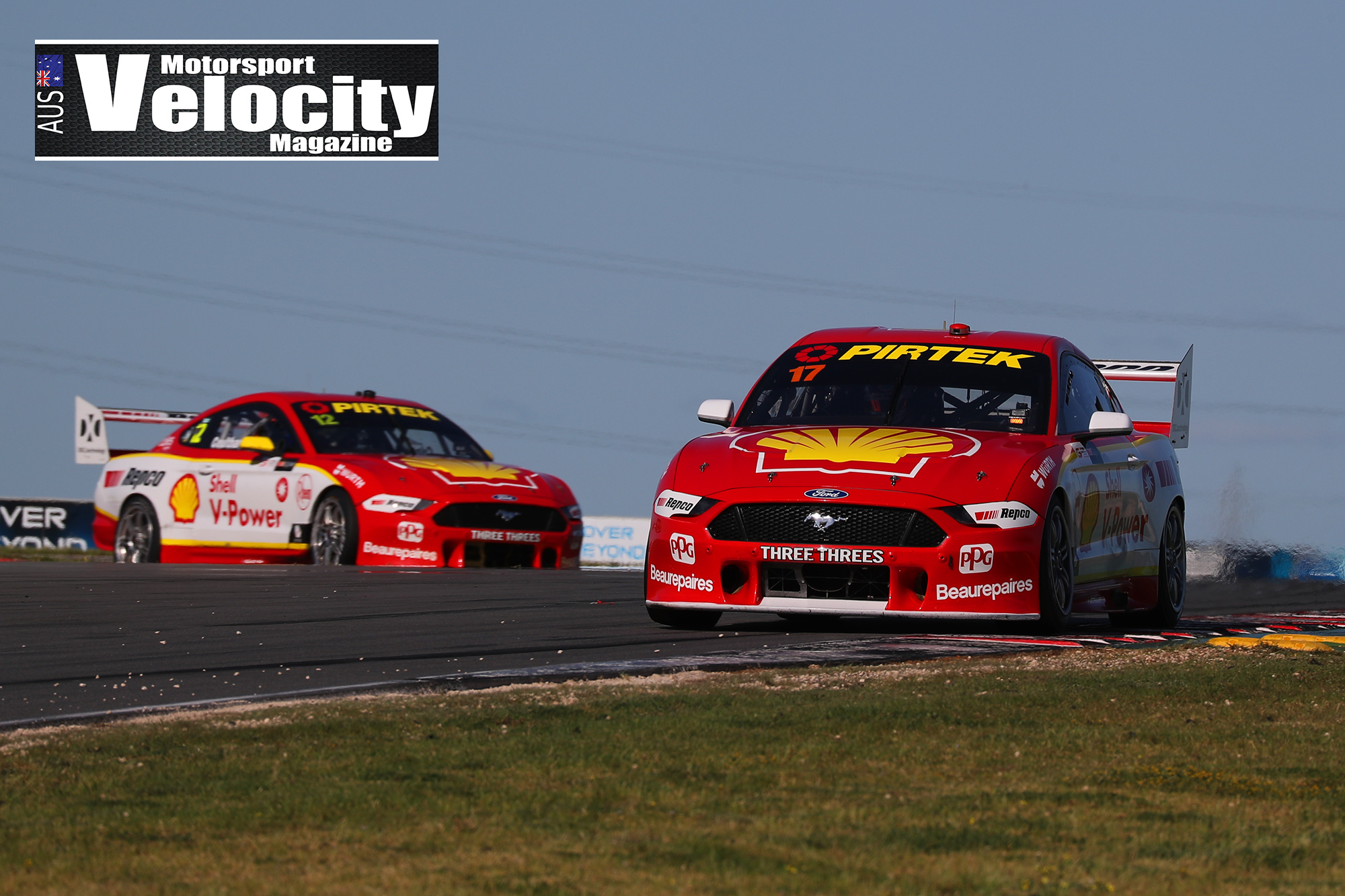 Scott McLaughlin lined up on pole position once more for the final race in the Repco Supersprint at The Bend Motorsport Park with Chaz Mostert also on the front row. Jamie Whincup, Fabian Coulthard occupied row two with Shane van Gisbergen back in 6th on the grid.

Coulthard jumped into second to make it a Shell V-Power 1-2 at the first turn, from Mostert, Nick Percat, Whincup and van Gisbergen. The field settled momentarily before another passing opportunity at turn 6. While the top 6 remained unchanged, Andre Heimgartner gained two place with a move past Pye and Waters. As the field cleared turns 14 and 15 on the opening lap, Le Brocq, Pye, Reynolds and Winterbottom became embroiled in an intense fight for 10th place. It all came horribly unstuck at turn 17 for a host of drivers, not the least Le Brocq and Winterbottom as well as Heimgartner and van Gisbergen.

The drama was triggered when Heimgartner made a move inside the Red Bull Holden Racing Team driver on the entry to the corner. While the Ned Racing driver slipped past cleanly, there was contact between the pair when van Gisbergen’s front spoiler nosed into the rear splitter of the Kelly Racing Mustang. Heimgartner spun to the outside of the corner and into the path of Le Brocq. Contact to the driver’s door of the Supercheap Auto Mustang from Reynolds saw Le Brocq and the Penrite Racing Commodore spear into the side of Winterbottom. The impact spun the Irwin Racing Commodore into the path of a hapless James Courtney in a domino effect. 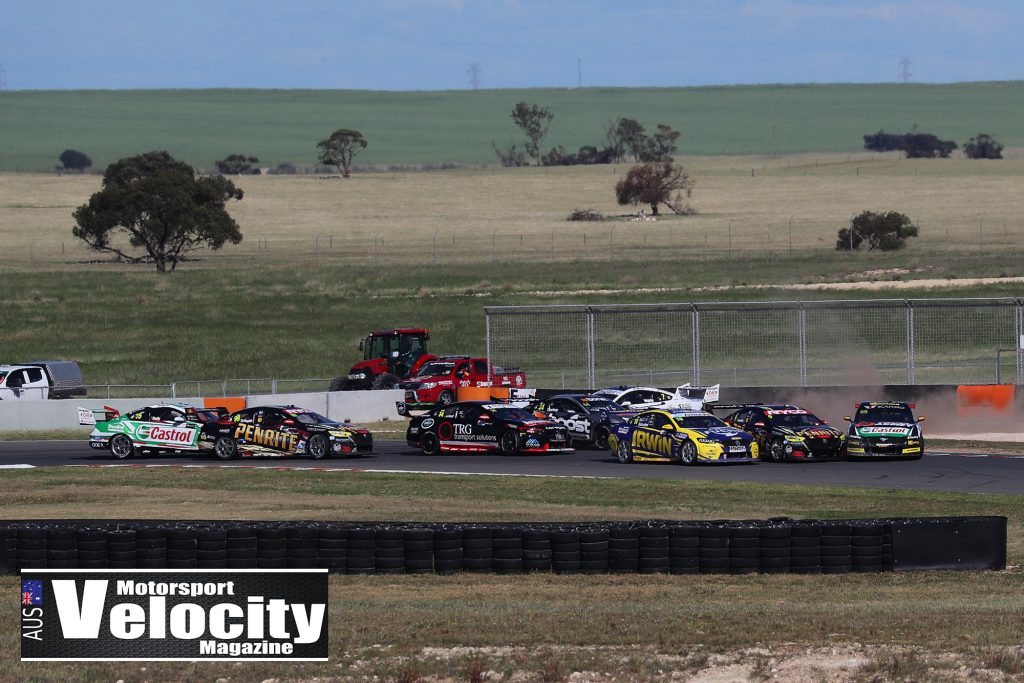 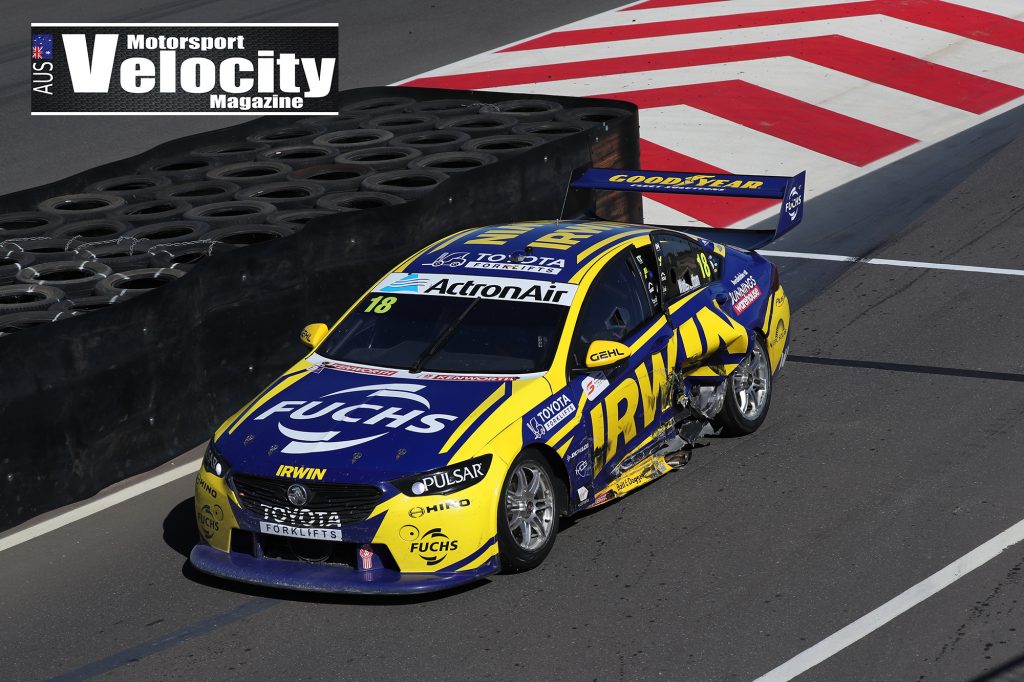 “I thought I was going to make it through, but Winterbottom caught me,” James Courtney told Fox Sports from his garage. “As I was spinning across the track I may have had one or two eyes closed. It’s unfortunate, it was so early in the race for something like that. I have no idea what happened and why it happened but I got hit and we’re parked up.”

The race regained some form of composure over the ensuing laps with McLaughlin and Coulthard in charge at the front of the field with Mostert a safe distance behind. Percat, Whincup, van Gisbergen, Waters, Jones, Pye and Le Brocq were the top 10 on lap 3. Percat’s tyres quickly gave of the ghost as the BJR driver fell back into the clutches of Whincup and van Gisbergen, who had a 15 second time penalty for the incident with Heimgartner hanging like a shadow above the #97. After dropping a place to Whincup at turn 17, Percat quickly peeled off into the pit lane for his compulsory stop.

Coulthard stopped at the end of lap 11 for tyres and resumed with the effective race lead from De Pasquale and Percat. Mostert’s tyres had past their best as the WAU driver tried to maintain track position and give himself half decent rubber for the run to the chequered flag. Whincup appeared to have no such issue and moved past the #25 at turn 6. McLaughlin handed the race lead to Whincup when he made a visit to the pits on lap 13 of 24, and resumed in 6th place.

Shane van Gisbergen’s hopes for a podium disappeared when he stopped for tyres with eleven laps left in the race. He then remained stationary while his 15 second penalty for the incident with Heimgartner was served. The #97 returned to the track as the last runner on circuit.

McLaughlin returned to the front as the last of the compulsory stops were completed and led from Coulthard, De Pasquale, Whincup, Waters, Heimgartner, Pye, Kelly, Percat and Reynolds with 6 laps still to be completed. Whincup was on a charge for third and made a late lunge for the position at turn 6 on lap 21. The Red Bull Holden Racing Team Commodore locked a brake in the move and pushed De Pasquale wide. Whincup addressed the situation and conceded the place back to the Penrite Racing driver. It was only a matter of time before Whincup to strike again and this time it was a trouble free pass as Whincup claimed third.

“I think we’re 1st and 3rd for the weekend and a 1-2 today,” McLaughlin said to Fox Sports. “I’m proud of Fab’s effort. Car 12’s been on the receiving end of a few bids runs. He hasn’t forgotten how to drive obviously. He’s a great teammate and for us the car is a pleasure to drive. Very proud of everyone at Shell V-Power Racing to be able to bounce back after yesterday. Being able to get the start helps a lot. When you are behind people means that they dictate what you do. It was important that I got the start and was thankful we did.”