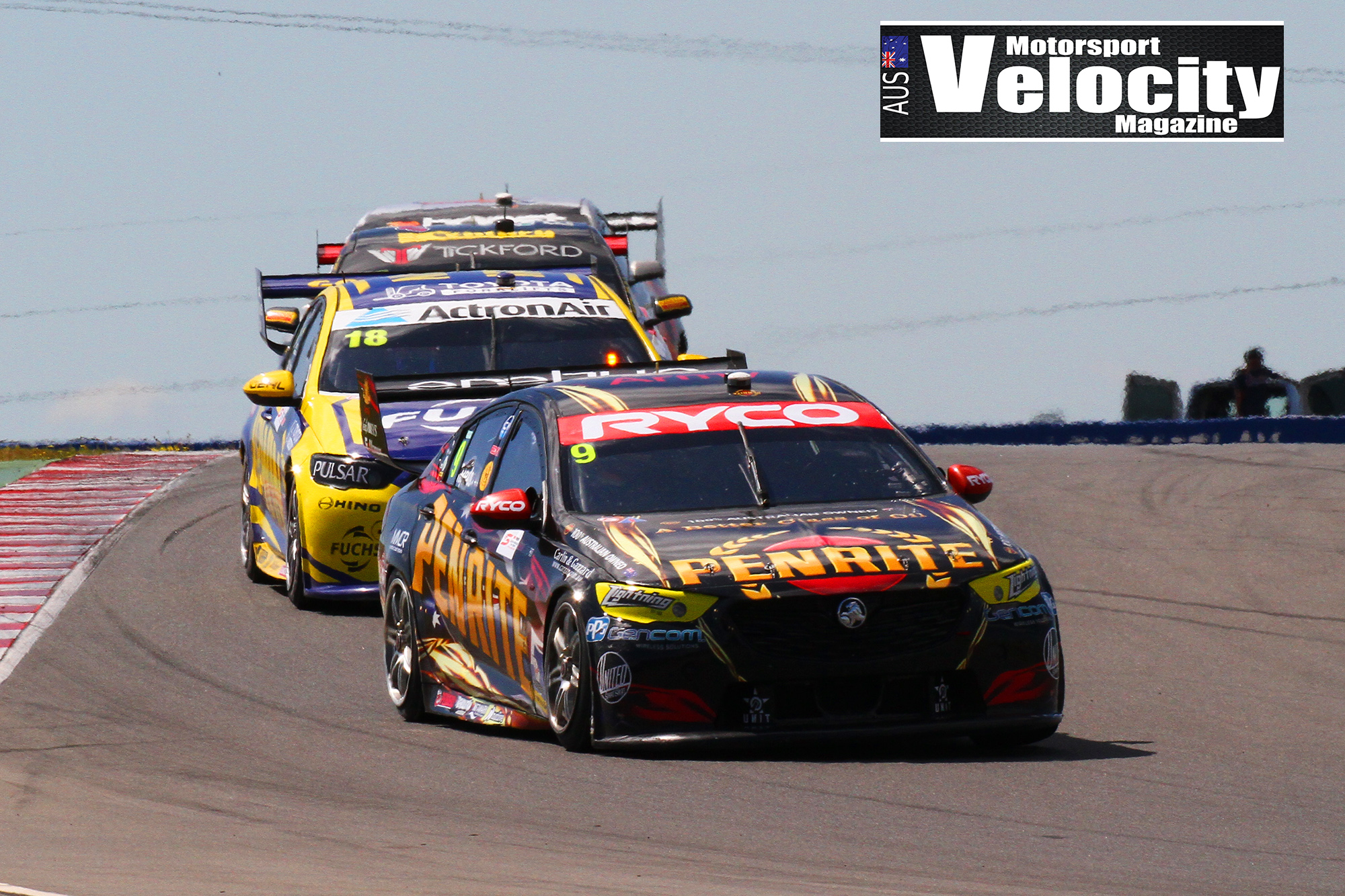 A solid points haul at Tailem Bend on Sunday has seen Penrite Racing return to fifth in the Team’s Championship, with young gun Anton De Pasquale narrowly missing out on a podium.

The #99 racer secured the team’s best results with 5th and 4th, while teammate David Reynolds came home in 7th and 9th.

Starting from 7th on the grid Anton didn’t get his best start and was knocked around in the opening corners, putting him back two places. His teammate on the other hand had a fantastic start and got away well to pick up three places before the first turn.

Pit lane opened at the end of lap five and that saw David head for the lane for rear tyres only.  It was a quick stop for the #9 racer, while Anton whose tyres were much better than the day earlier, opted to not take his two tyres until lap 11. With the pit stop sequence complete Anton came out P9, ahead of his teammate in P11.

They were both men on a mission and showed off their car speed with some swift moves amongst a battle-pack for fifth. Anton made his last move on the last lap and progressed into 5th while David followed him as best he could and made an impressive nine places to 7th before the checkered flag. 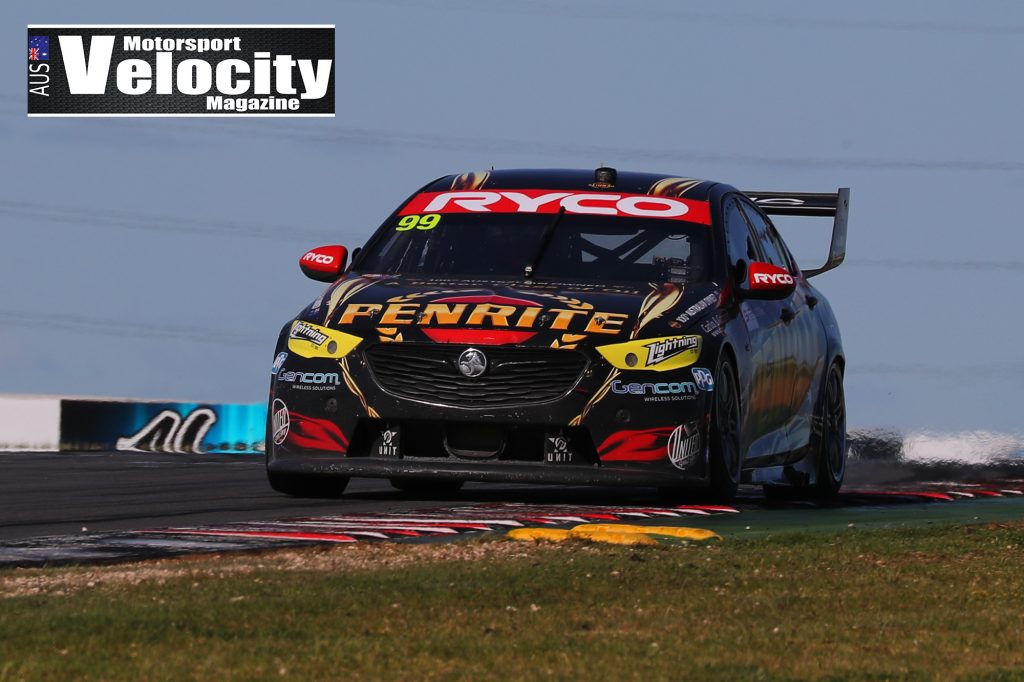 The seas parted ways in the last race of the day as David and Anton started from P14 and P18 respectively. The duo both made up three places each before turn one before chaos unfolded at turn 17.

A few spun cars caused havoc in the field though Anton managed to get away cleanly. He made the most of the incident and moved up to 11th before reaching a battle pack for 8th, while David was forced off onto the dirt and lost four places in the process.

David took his compulsory pit stop at the end of lap six for rear-tyres only, while Anton followed him in the next lap from ninth. The #99 Holden was the fastest on track on fresher rubber and was looking at a podium once the pit stops cycled through, while David circulated the third fastest in 10th.

With just a few laps remaining Jamie Whincup crept up to the back of Anton’s Commodore to take third but had to have a couple goes before he made the move stick. On older rubber, Anton had no choice but to let his competitor go, doing his best to hold onto his now old tyres. David raced through to ninth by the checkered flag, while Anton crossed the line a whopping 14 places up from where he started in 4th. 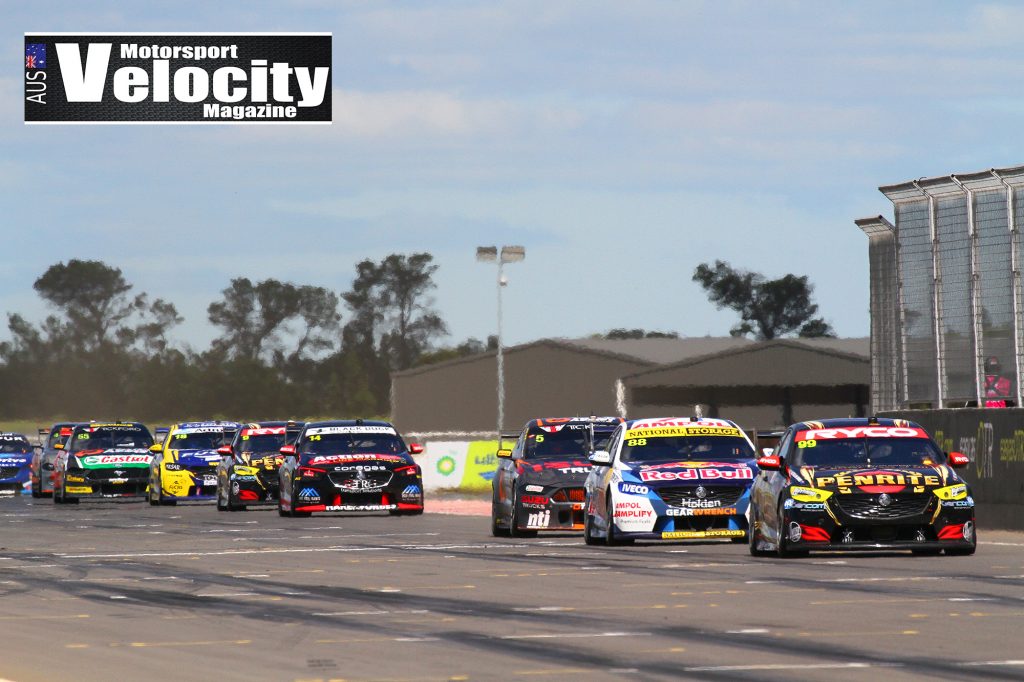 Anton De Pasquale was happy with his race pace, saying: “Qualifying was not ideal for us, we had some dramas which carried over a little bit from the race yesterday and qualified further back than what our car speed was. But we worked out what was going on and fixed it before the race.

“We had a fast race car in both races. We were fifth in the first one but were struggling to get past some cars but definitely had the pace for a podium. In the last race we ended up 4th from 18th so it was really good. We had to pit quite early and go quite hard on the tyres so they blistered by the last few laps and I couldn’t really battle Jamie for the podium. That was unfortunate but from where we were and where we qualified it was really good.”

While David Reynolds said he had seen a big improvement overnight: “Qualifying was pretty ordinary, but we changed our car for the race, and it was heaps better. I wished we started that setup at the start of the weekend, it would have allowed me to chip away and hopefully come up with a better package overall but luckily we have another weekend to take that into next weekend.

“The first race today was really good; we pitted early to try normalise the balance of the car and I probably had the best tyre life in the field. In race 3 unfortunately I got boxed around at the start and was in the middle of a couple crashes.  That bent my steering and made it difficult to drive after that.

“Overall it was a good weekend for the team, we are learning a lot about each individual car and I am really looking forward to next weekend.”

The team now have just a few days prepare for the second leg at Tailem Bend, though next weekend’s racing will see the introduction of the 3.1-kilometre West Circuit.