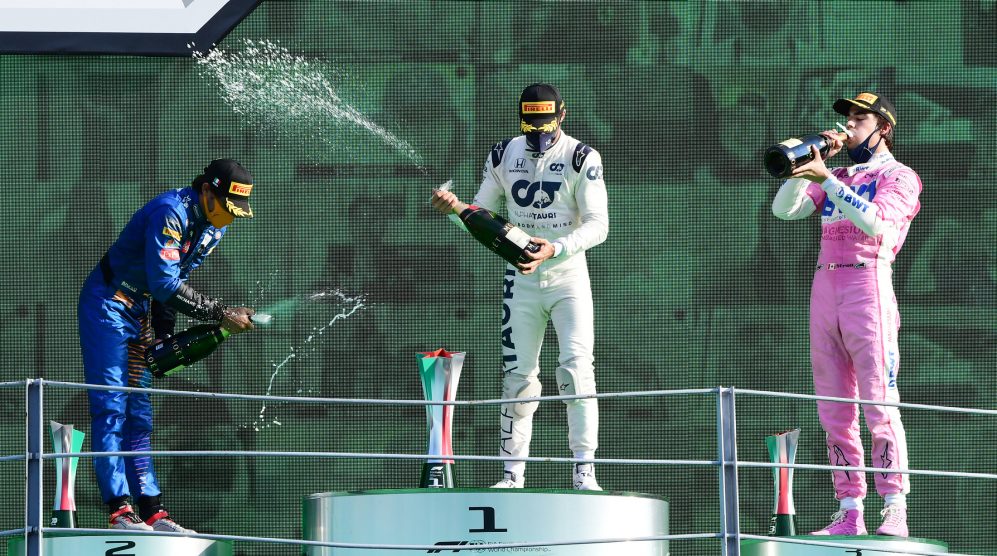 Lewis Hamilton made a typically fast start to the Italian Formula One Grand Prix, while teammate Valtteri Bottas lost a place to Carlos Sainz. Daniel Ricciardo veered to the right side of the track and had two wheels on the grass as he fought with Max Verstappen for track position into the first corner. The field safely navigated those opening corners, though Alex Albon took to the run off area in order to avoid contact in the mid pack.

Hamilton led into the Less Curves from Sainz and Norris, who had pushed past Bottas. Perez and Ricciardo jostled for 5th place with Verstappen in pursuit. Bottas struggled to regain some form of rhythm as Perez and then Ricciardo also moved ahead of the #77 Mercedes.

“Puncture, puncture or something,” Bottas told his team as the cars rounded the Parabolica to complete the first of 53 laps.

Max Verstappen was another to struggle with speed on the opening lap and was pushed from 7th place by Lance Stroll under brakes at turn 1 on the second lap of the race.

By lap 5 Hamilton held a 2.3 second lead over Sainz, with Norris a further 2 seconds behind. Perez, Ricciardo and Bottas and Verstappen ran in close company with just over 2 seconds separating the quartet of drivers. Stroll, Ocon and Gasly rounded out the top 10 runners. For Ferrari it was another disappointing start with Leclerc 13th and Vettel 17th, both headed by Kimi Raikkonen in the Alfa Romeo.

Hamilton set the fastest time of the race to date on lap 7 as he gradually pulled away from the McLaren pair, while Perez and Ricciardo closed the gap. Sebastian Vettel was spared the pain of a full race distance at Monza in an uncompetitive car, when his Ferrari suffered a brake issue which set the German’s car plummeting through a series of foam blocks as he tried to slow his car. Vettel managed to limp back to the pits where the car was retired.

Alex Albon was also finding the race to be a rather frustrating affair. Having run wide after an incident with Gasly on the opening lap, he was then involved in an incident with Romain Grosjean at turn 1, which resulted in a 5 second time penalty for the Aston Martin Red Bull driver.

Kevin Magnussen became the second race retirement when he pulled to the side of the track near pit entry with a mechanical issue on lap 20. The Safety Car that followed appeared to present Lewis Hamilton with the perfect opportunity to pit for a medium set of tyres. The rest of the field were forced to stay on track as the pit lane was closed as the marshals rolled Magnussen’s car towards the pit entry. The action raised concerns about the legality of Hamilton’s stop and that of Giovinazzi, who also managed to make it into the pitlane. The matter was then listed as ‘under investigation’ by Race Control.

The Haas was pushed to safety by lap 23 and the pitlane was opened. The rest of the field stopped almost immediately, with Norris locking his brakes dramatically at the pit entry in front of Perez while teammate Sainz completed his stop. Bottas managed to leapfrog both Ricciardo and Perez during their stops and returned to the circuit as it was announced the Safety Car would end at the completion of the lap, with most of the field a long way behind.

Hamilton led Stroll at the restart, though the Racing Point driver had not yet stopped. Gasly had stopped earlier and sat in 3rd from Giovinazzi, Raikkonen, Leclerc and Latifi, who had stopped before the incident for Magnussen. Sainz sat in 8th with Norris, Bottas, Ricciardo and Perez immediately behind.

Leclerc weaved around both Alfa Romeos at the restart, while the faster runners took a more cautious approach as they began the task of passing the slow traffic ahead. Hamilton led on medium tyres from Stroll, who still had the soft tyres with which he had started the race. Gasly, Leclerc, Raikkonen were all on the harder compound tyres, while Sainz, Norris, Bottas, Ricciardo and Verstappen were all on mediums.

Charles Leclerc suffered a huge accident at the Parabolica near the end of the lap when his Ferrari ran straight on and made heavy contact with the tyre wall. Miraculously he was seen to be moving inside the car and then responded “Ahh what a big crash,” when asked by the team if he was unharmed. He then removed the steering wheel and carefully climbed out of the car. Replays showed that Leclerc lost the back end of the Ferrari under acceleration mid corner and ran off the track and into the tyres at high speed. The race was subsequently red flagged as the Ferrari was extracted and the tyre barrier repaired.

As the cars returned to pitlane Race Control issued 10 second penalties to both Hamilton and Giovinazzi for the timing of their first stops.

The red flag proved to be a huge advantage for Stroll, as teams were permitted to change tyres. It was also somewhat of a benefit for Bottas as teams were also allowed to change damaged parts, with the AMG Petronas Mercedes engineers looked to change components on the #77 car.

The field returned to the track for a second start to the race with Hamilton on pole from Stroll. Hamilton was quick to take the lead while Stroll was swamped by Gasly and the two Alfa Romeos on the run to the first turn. The field made their way through safely, though Stroll suffered a huge brake lock on the approach to the second chicane and took to the run off area at high speed. After disappearing from view for a brief moment or two, the Racing Point bounded back onto the circuit in 6th, between the two McLaren cars.

Hamilton took his pitlane penalty on lap 29, which placed Gasly in the lead from Raikkonen and Giovinazzi, who was also due to take a penalty stop. Sainz moved into 3rd when Giovinazzi eventually stopped and set off after Raikkonen. Within two laps the Alfa Romeo had dropped to 4th as Sainz and then Stroll moved past.

Gasly continued to lead the race by just over 2 seconds from Sainz with 10 laps left. Stroll, Norris, Bottas, Ricciardo, Ocon, Kvyat, Raikkonen and Perez were the top 10 runners, while Hamilton had recorded the fastest lap of the race as he stormed up to 12th. Verstappen, who had been off the pace throughout the race, eventually returned to the pits and retired with a mechanical issue. The lead ebbed and flowed throughout the following half dozen laps with Sainz tantalisingly close to the DRS activation zone. Gasly managed to keep the gap beyond a second as the McLaren team suggested setting changes to reduce the gap.

Sainz reduced the gap to 3/10ths of a second on the final lap, with Sainz determined to take the win. Gasly hung on to win by just under a half second. It was the first time in 176 races that a team other than Mercedes, Ferrari or Red Bull had won a Grand Prix. Stroll took the final place on the podium from Norris, Bottas and Ricciardo. Hamilton climbed back to 7th at the chequered flag from Ocona, Kvyat and Perez.

“Honestly, It’s unbelievable,” Gasly told Sky Sport. “I’m not realising what happening right now you know. It was such a crazy race and then we capitalised on the red flag. The car was fast, we had a pretty fast car behind us. I mean I can say that I’ve been through so much in the space of 18 months. My first podium last year, I was like, Wow! Now with Alpha Tauri now my first win in Monza.. I struggle to realise. I have no words and this team has done so much for me. They gave me my first opportunity in F1, they gave me my first podium, now they are giving me my first win. It’s crazy, honestly it’s crazy and I can’t thank them enough.”