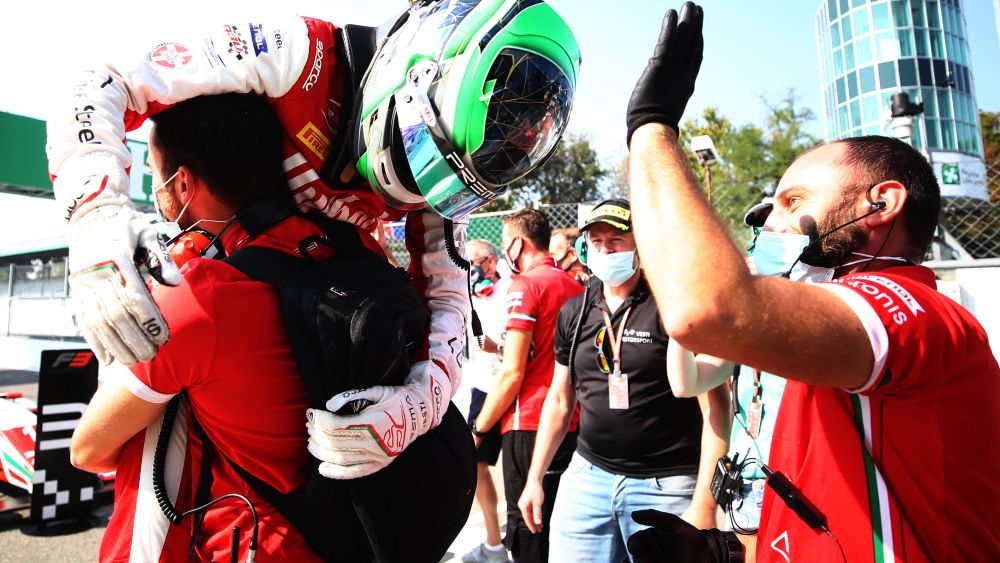 Kiwi Liam Lawson started from pole position with rookie Matteo Nannini alongside. Jack Hughes and Calan Williams shared the second row ahead of championship leader Logan Sergeant and Theo Pourchaire. The long from the start line down the Rettifilo Tribune to the tight right-left chicane offered the chance for drivers to gain places on the opening lap, yet also presented inherent dangers for those who exceeded grip level or braking distances at the start of the race.

As the lights went out Lawson led away from a fast starting Hughes, with Nannini tucked in behind. Pourchaire, Sergeant and Fraga had moved by a slow starting Willams with Peroni next in line. Sebastian Fernandez swerved erratically from the extreme right of the circuit and collected the front of Jack Doohan’s car, which sent the ART spinning to the left of the circuit and through a brake marker. Those close behind somehow avoided Fernandez as his car finally came to rest in the run off area at turn 1.

Nannini locked a front brake as he speared up the inside of Lawson at the first turn which sent Lawson over the sausage kerb and back across the front of Nannini at the exit of the second corner of the chicane. Nannini tried another unsuccessful pass for the lead, which allowed Lawson to make a small gap from Nannini, Pourchaire and Hughes. The field moved into single file for the run to the Ascari Chicane for the first time.

Lawson led at the end of the first lap from Pourchaire, Nannini, Hughes, Williams, Fraga, Sergeant, Peroni, Vesti and Zendeli. Smolyer and Beckmann overshot the first turn at the start of lap 2 and sent foam blocks flying as they regained control and weaved back towards the circuit proper at the exit of the chicane.

Pourchaire reduced the gap to leader Lawson and used the DRS at the start of lap 4 to gain first place.

Peroni displaced Sergeant from 7th place at the Curva di Lesmos on the same lap as the PREMA driver appeared to be struggling with the balance of his car. Oscar Piastri had made steady progress at the same time to move into 12th place. Sargeant dropped to 11th when he outbraved himself in a failed pass on team-mate Vesti to be right in the sights of Piastri, who ran alongside at the Curve Grande and took the place at the Lesmos curves.

Hughes gained second fro Lawson on lap 6 at turn 1, while Fraga dropped down the field when he took to the run off area. The incident promoted Peroni to 6th, while Sergeant used DRS to regain his advantage over Piastri at turn 1 as Smolyer joined the PREAM duo in a battle for 10th place. Piastri was forced off track by Sergeant after an attempt to repeat his pass at the Less curves but managed to hold off Smolyer at the following corner.

Alex Peroni recorded the fastest lap of the race on lap 6 and looked to pass Williams for 5th at turn 1. Peroni moved left under brakes and lightly tagged the rear of Williams Jenzer as he tied to avoid the car under brakes. Peroni ran wide and weaved through the foam blocks at turn 1, while Williams was left in a perilous position after a spin left him facing oncoming traffic.

Nannini and Lawson were the next to collide at turn 1 on lap 9 when the Italian moved his blue Jenzer inside the HITECH Red Bull sponsored car. Lawson held his line and squeezed Nannini over the ripple strip. The response saw Lawson’s car bounce over the kerbs and retain 3rd place. Nannini was less fortunate and limped out of the chicane with damage to the left front suspension. Pourchaire led from Hughes, Lawson, Vesti, Beckmann, Peroni, Zendeli, Sargeant, Piastri and Stanek.

Piastri swept around the outside of Sergeant on lap 10 at turn 1 after the American had weaved right under brakes in an attempt to protect his position. Vesti challenged Lawson at the second chicane with both divers running off the track as they fought for 3rd place. The #2 PREMA driver eventually claimed the place as Lawson bounced over the gravel and ripple strip at the exit of the second chicane. The Safety Car was the called when Fernandez spun at the Ascari Chicane and stuck his ART firmly in the gravel.

The race resumed on lap 14 with Pourchaire ahead of Vesti and Hughes, while Beckmann took 4th from Lawson at the first turn. Lawson replied at the exit of the corner and forced Beckmann wide, which allowed both Peroni and Piastri to move past the Trident driver. Logan Sergeant was hit by Novalak at the second chicane and spun out, the #3 PREMA entry parked against the marshal post facing the wrong direction. Sergeant kept the engine running and rejoined a distant last. Piastri was fortunate to survive a late lunge from Backmann at turn 1 on lap 18, when the Trident driver lock a front wheel under brakes. He somehow managed to avoid contact with Piastri but lost a half second to the Australian in the process.

The battle for 4th place became a for way battle in the closing stages of the race as Lawson tried to fend off Peroni, Piastri and Beckmann. His defensive driving had seen the gap to Hughes in 3rd blowout to 2.3 seconds, while the three drivers behind were separated by just over 1.4 seconds. Piastri swooped around the outside of Peroni at turn 1 with the Tasmanian giving his Australian compatriot plenty of space at the exit of the corner. A slide out of the Parabolica on lap 19 saw Peroni’s exit speed compromised and he became an easy prey for Piastri a short time later. The Campos driver relieved that the sausage kerb had been removed at the very point in which he had his accident a year earlier.

Vesti took the race lead with a late dive at turn 1 with 3 laps left to run. Piastri displaced Lawson from 4th at the same time. A slow exit for the Kiwi driver saw Peroni look to pass only to find himself under attack from Beckmann Novalek and Zendeli. Lawson, Novalek and Peroni ran three wide towards the Curve Grande before Peroni settled into 9th place. Novalak was on a charge knowing that he had been handed a post race time penalty for the earlier contact with Sargeant. Piastri made it into 3rd past Hughes at the exit of the Lesmos curves with 2 laps left to run as drivers began to struggle with grip on their well worn soft tyres.
Peroni was one such driver and dropped to 11th on the approach to the Parabolica on the penultimate lap.

Vesti went on to win the race from Pourchaire and Piastri. Beckmann, Hughes, Lawson, Zendeli, Viscaal, Fittipaldi and Belov completed the top 10 after time penalties were given to Novalak, Peroni and Stanek.

“Yes, what a race!” exclaimed Oscar Piastri on the slow down lap after his drive from 14th to 3rd. The result placed Piastri back into the championship lead by 8 points, while Sergeant finished in 27th position.