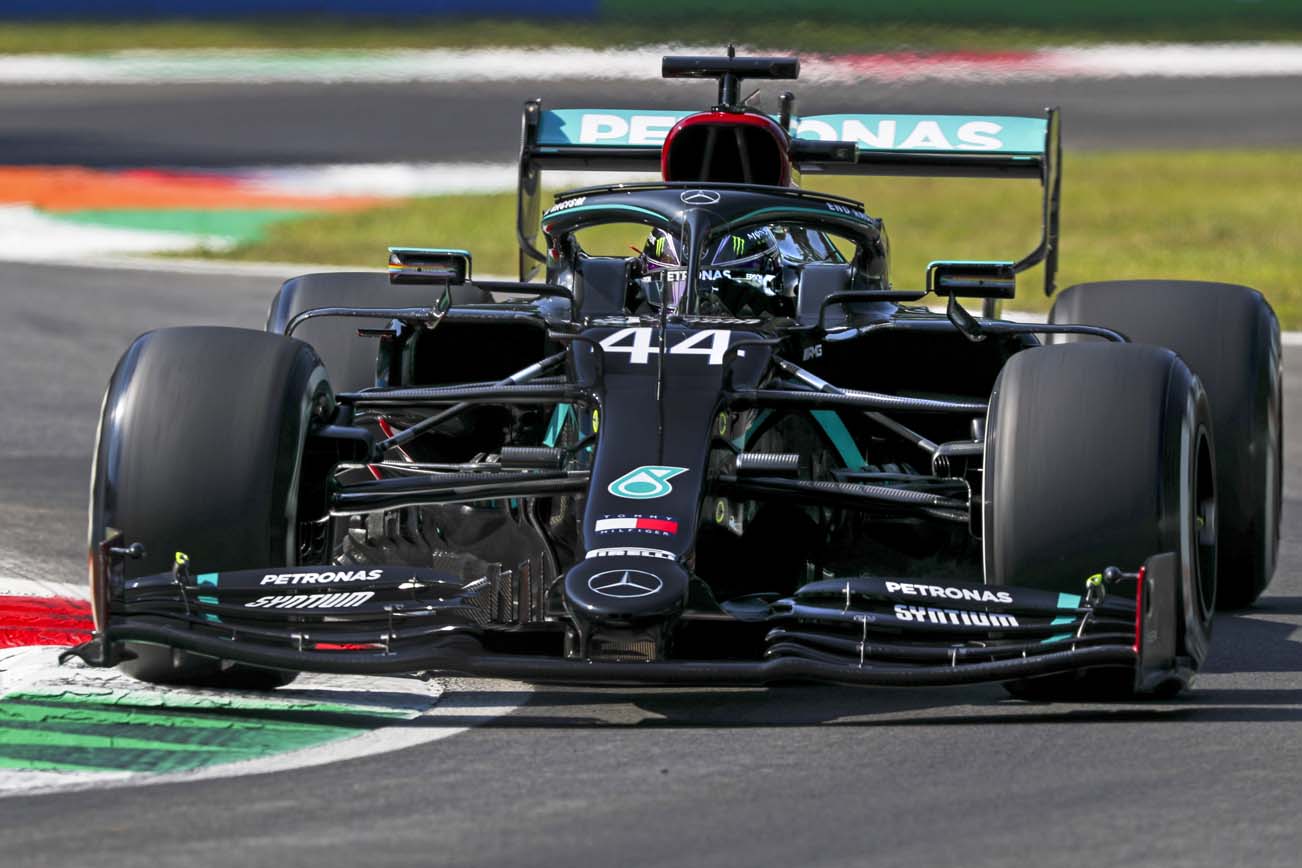 AMG Petronas Mercedes F1 completed the first day of practice for the Italian Grand Prix in their now customary position well ahead of the opposition. Whilst it was smooth sailing for the Mercedes pair, there was more than the odd hiccup for the opposition throughout the day.

There was an uncharacteristic off for Max Verstappen in P1, which saw the Aston Martin Red Bull driver spin across the track and nudge into the tyre wall at the Ascari chicane. The Dutch driver managed to drag the car from the gravel and limp back to the pits minus his front wing, that remained behind amongst the scattered gravel.

Team boss Chirstian Horner put the accident down to a “Disconnect in balance” with the car, Horner told Sky Sports. I was just talking to him at the back of the garage. He has got a bit of a disconnect in balance as well at the moment. I am sure we can tune that out, hopefully for the next session. I think there was a bit of damage on the bottom of the car that the mechanics will get into as well, but thankfully it was just the front wing. It is really high speed over there so we are lucky to get away with the lowish amount of damage that we did.”

Daniel Ricciardo was not concerned after ‘officially’ recording the 15th fastest time in P2. He later explained that the car had been well on the pace and the time was not indicative of the speed of his Renault or any other issue with the car.

“It was a good day and I’m very happy with our work. I was already feeling comfortable in FP1, finishing ninth, but I knew there was a good bit more in it,” Ricciardo told Renault Sport Media. “We showed the pace in FP2, however, our lap time was removed for track limits. I’m not concerned about that as it’s a small thing and today is about finding the limits. We know if we keep it on track tomorrow, we’re holding onto that lap time, which should put us up the leaderboard. Our long runs were good as well and that was nice. We’ll concentrate on tomorrow and look to make it count.”

The fall from grace for Sebastian Vettel and Ferrari showed no abatement at Monza when Vettel addressed the media. Having trailed towards the wrong end of the timesheets in FP1, Vettel improved to 12th, still over 1.5 seconds behind Lewis Hamilton on Ferraris spiritual motorsport home. There were worrying signs for the continued relationship for Vettel and F1 post 2020 when he talked of bigger issues as he addressed the media later in the afternoon.

“You could ask where Formula One is and what place Formula One is filling?” Vettel said (news.com.au 5.9.20).
”The sport has some big challenges ahead, obviously the whole situation with the pandemic around the world doesn’t help, but nevertheless I think there’s some big questions to be answered. With the way the world is going I think there are big things that we need to tackle, we need to address, and Formula One is maybe not at the forefront of this. Looking after the world, the environment, Formula One has to do more and be a bit more and tolerant, otherwise I think it could get difficult in the future.”

Lewis Hamilton ended the day on top once more, while teammate Bottas was left to ponder how he can overcome the differential to his teammate and World Championship rival.

“The car didn’t feel great in the first session but in the afternoon, it felt like we made some encouraging improvements and it was much better,” Hamilton told AMG Petronas Mercedes Media. “We have a few more steps to make overnight and then I think it’ll be where it needs to. It’s quite a bumpy track here and with the low downforce, there’s a lot of sliding. You need to find the right balance with the bumps and between the low and high-speed turns. The field is typically a lot closer here, compared to Spa, as it’s such a fast lap and there aren’t many corners. Valtteri’s quick here, too, so it’s going to be a fun battle. It’s going to be interesting in Qualifying, obviously we didn’t get our final lap in last year and I think the last corner will be a bit of a nightmare with everyone trying to get a gap, so it’s going to be hard work.”

Valtteri Bottas was happy enough with the performance of his car, but acknowledged there are gains to be made in his effort. “The car felt pretty good out there throughout the day, but there is always more to come,” Bottas told AMG Petronas Mercedes Media. “I’m sure we can still improve it, for example the rear stability was lacking a bit in a few of the corners. My lap in practice two wasn’t great so from my side, there’s quite a bit more to come as well.”