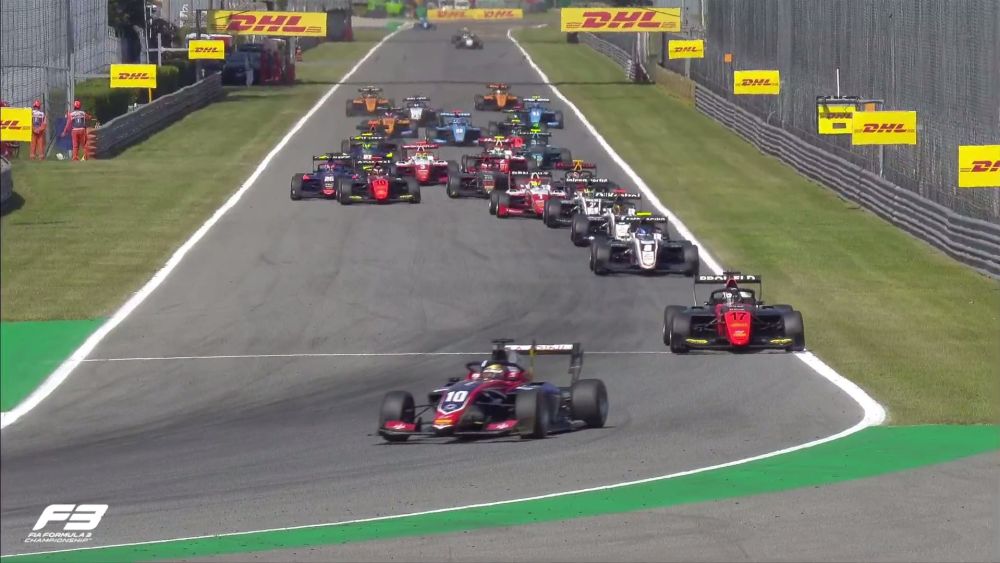 A total of nine drivers received grid penalties for their part in the almost farcical scenes towards the end of F3 qualifying at the Italian Grand Prix. After a relatively ordered first set of qualifying runs, a brief red flag period became the catalyst for chaos as drivers strolled two wide around the Monza circuit. The traffic jam that ensued was not uncommon on the Sydney Harbour Bridge, but served no purpose for those who had ventured out to improve their time.

The problems began as the cars headed out for their second timed runs in the final 10 minutes of the session. Liam Lawson’s Red Bull sponsored HITECH machine had somehow managed to escape from pitlane with a radiator cooling fan still stuck inside the left sidepod. It didn’t stay trapped for long and left debris on the edge of the racing line as it bounced along the circuit. Cars returned to the lane as officials collected the errant pieces.

Jake Hughes and David Beckmann had taken turns at the top of the timesheets in those opening exchanges and were set on maintaining their advantage during the final timed runs of the session.

Beckmann headed the field onto the track with a little over 8 minutes left. He was incensed that he had been released in clean air without the aid of an all important tow. Beckmann appeared to slow the field dramatically and dropped back behind the following cars. In a case of ‘Follow the leader’ a raft of drivers did likewise, which lead to a log jam of cars that was impassible at any speed.

Theo Pourchaire had taken advantage of the ART position in pitlane and worked with teammate Alex Smolyer to provide the desired tow on the long Monza straights. Pourchaire jumped into 1st place, with the second ART entry of Smolyer marginally behind in 3rd. Having set fast times, the ART pair dropped their pace but continued to tour around the circuit on the racing line. Lirim Zendeli’s Trident was also well positioned near the head of the queue and he used fellow Trident driver Beckmann to secure the 2nd fastest lap of the session.

Alex Jake Hughes had set a fast time in sector 1, only to see the effort abandoned when he came across the slow moving PREMA cars shortly after. It was a situation that was repeated many times over as drivers on fast laps slowed at the back of the ever increasing blockage.

PREMA seemed to be caught out by the situation as championship contenders Logan Sargeant and Oscar Piastri sat 3rd and 4th briefly after their first laps. The pair eventually qualified in 10th and 12th respectively after rather slow push laps which placed them in the midst of the ever increasing road block.

Calan Williams enjoyed another good day in the Jenzer entry to secure his second top 10 starting position of the season, while it was a frustrating outing for Alex Peroni. The Tasmanian had sat near the edge of the top 10 after his first run only to find the traffic after a best first sector in his second attempt at a time.

Race officials worked long into the night to examine the cause of the incident and issue infringements to the adjudged culprits. Pourchaire was stripped of his starting position as was Zendeli, Smolyer, Beckmann, Piastri, Vesti, Caldwell, Fernandez and Chovet.

Liam Lawson, who was under investigation for the red flag incident, inherited pole position and kept alive his championship hopes in the process. Matteo Nannini was handed second place from Jake Hughes, Calan Williams and Logan Sargeant. Pourchaire, Fraga, Peroni, Vesti and Beckmann. Oscar. Piastri championship hopes took a battering with a drop to 15th place for the opening race of the weekend.

Oscar Piastri was left more than a little miffed by the Steward’s decision.

“3-place grid penalty for tomorrow,” Piastri wrote on his Twitter feed. “Stayed off the racing line on my cool down lap to let people through, was instructed in the stewards room that I should’ve moved onto the racing line because that was the ‘better option’.I have stayed calm about all the issues/inconveniences during this season, but man does this push my limits of patience. I am very confused by this decision. Anyways, head down tomorrow, and will be channeling my inner Daniel Ricciardo.”