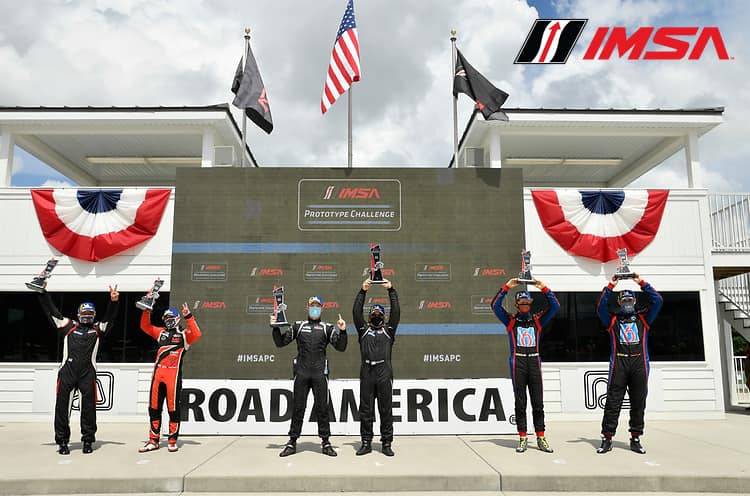 Scott Andrews and the JDC MotorSports crew had to be really aggressive on fuel strategy again, they pitted with teammate Gerry Kraut under yellow as soon as the pit lane window opened. This saw Scott having to save around 2 laps of fuel so 5 laps into the stint he went into basically a full save mode.

The team then ran the clock down as Scott had a gap behind which we created by pitting early.  The race had to finish after 1:45pm so they were forced to slowed right down to conserve fuel with Scott already on the reserve tank and also to having to run the clock down. It turned out to be the perfect strategy as Scott finished a few car lengths ahead of 2nd and 3 seconds over the official race time. 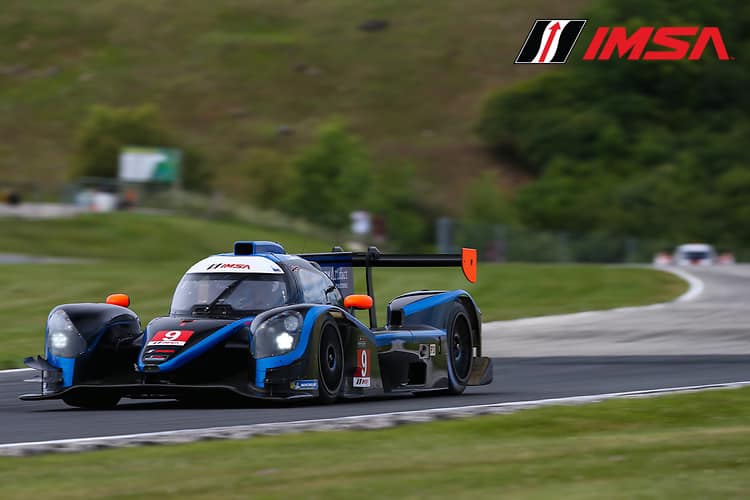 Scott told Velocity Magazine exclusively, “It was a crazy finish. I was in panic fuel saving mode at the end and we were also racing against the clock, whilst keeping the gap to the cars behind chasing us down. We timed the strategy absolutely perfectly and I can’t think my engineer and team enough for their risky, but ultimately race winning strategy.”

“It was a tall order to save about 2 laps of fuel but with some luck it paid off for us. Big thanks to JDC MotorSports and my teammate Gerry. To win two in a row was unexpected but we’re super stoked and grateful.”

Scott and Gerry’s next outing in the IMSA Prototype Challenge is Sunday, Aug. 23 at VIRginia International Raceway.

Gerry Kraut and Scott Andrews picked up their second consecutive IMSA Prototype Challenge win on Saturday, but not without some drama, confusion, momentary deflation and eventual elation.

Andrews was behind the wheel of the No. 9 JDC MotorSports Norma M30 for the final stint at Road America, nursing his fuel to the finish 1.837 seconds ahead of the No. 74 Forty7 Motorsports Norma driven by Wyatt Schwab and Jon Brownson.

The drama and confusion erupted when the field was shown the white flag instead of the checkered as Andrews crossed the finish line. Based on IMSA’s lap-time average predictor, the race leader was expected to cross the line before the one-hour, 45-minute time limit ran out, necessitating one more lap. But since Andrews’ pace had slowed dramatically in fuel-saving mode, he crossed start-finish a few seconds after time had expired.

The extra lap that wound up not counting saw a five-car thrash around the 4.048-mile road course for what they thought would be the win. Dakota Dickerson maneuvered from fifth place to first in the No. 54 MLT Motorsports Ligier JS P3, but he was returned to fifth in the official result.

The victory for Kraut and Andrews comes two weeks after they won at Sebring International Raceway, though neither was sure initially if they had won Saturday.

“I was on the timing stand and the clock had run out,” said Kraut, who drove the opening stint but was among the first to pit 45 minutes into the race. “(Andrews) was coming out of (Turn) 14, we assumed they were going to throw the checker and they threw the white. We went like, ‘What?!’ Obviously, they did the right thing to reverse that.”

Andrews said he would’ve been delighted with third place, where he was when the extra lap was completed. Then he received the good news over the team radio on the cooldown lap.

“They said, ‘Hang tight, we may have won this thing,’” Andrews said. “So, I was super happy and celebrating the whole time. It was good.

“We came into the race probably knowing we didn’t have the pace, so we had to do a risky and aggressive strategy on fuel if we had any chance to win. As far as strategy and teamwork and just the driving for both of us, I think we did a really awesome job collectively.

“I’m stoked. Two in a row is awesome. It’s not something we expected but we’re very grateful we have the opportunity to do it.”

An additional post-race reshuffling occurred in technical inspection where a fuel capacity infraction was revealed on the No. 74 of Schwab and Brownson. The car was moved to the bottom of the finishing order as a result.

The penalty moved Dan Goldburg and Blake Mount into second in the No. 6 Performance Tech Motorsports Ligier. David Grant and Keith Grant, who started on pole in the No. 40 Forty7 Motorsports Norma, wound up third overall but claimed victory in the Bronze Cup class.

“It was great,” Keith Grant said. “David put down some good qualifying laps and was able to start from the pole for us. He led the whole first stint and did a good job of getting us a gap. We had a good pit stop this time; we had troubles last time at Sebring. I just had to put my head down.”