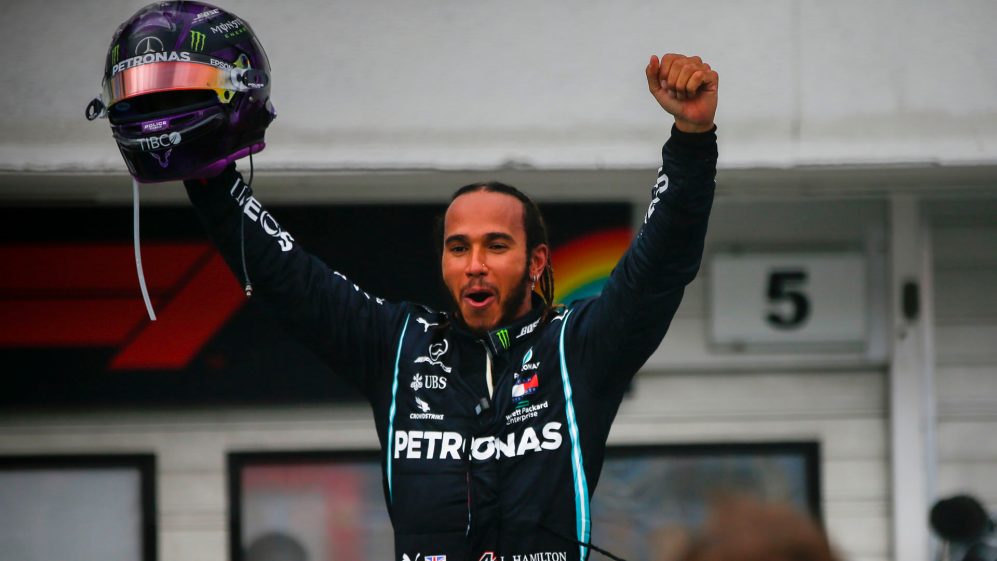 The excitement started even before the lights went out when Max Verstappen spun off the track on the way to the grid and collected the wall, it all looked like he was done, however he managed to select reverse and limp the car to the grid.  The team set about replacing the smashed front nose but it was the front left wheel and suspension that required some urgent repairs, the team managed to fix it with just seconds to spare.

The field set off on the formation lap under grey skies. The track was still wet from an earlier shower, though the precipitation had stopped. All the grid, bar the Haas of Kevin Magnussen had set off on the intermediate tyre. Magnussen had full wets in the hope that heavy rain would fall soon after the opening laps of the race.

The Haas pair peeled off to the pits prior to the start of the race, presumably to change tyres. Lewis Hamilton held some concerns for his Mercedes’ engine and told his engineer that he didn’t want to be held on the grid for too long.

Valtteri Bottas moved before the lights had gone out and then stopped, which compromised his start. Sergio Perez was also slow to move as the lights went out which causes Leclerc and Sainz to swerve towards the pit wall. Hamilton made a clean start and led on the run to the often problematic turn 1. Bottas was sandwiched between the two Ferraris and lost places to Lance Stroll, Max Verstappen, Sebastian Vettel, Charles Leclerc and Sergio Perez. Carlos Sainz and Daniel Ricciardo battled for 8th place through turns 3 and 4 before Sainz took the position.

Hamilton led by 3 seconds at the completion of the first lap from Stroll, Verstappen, Vettel, Leclerc, Bottas, Perez, Sainz, Ricciardo and Latifi.

Bottas and Leclerc pitted on lap 3 for tyres. Leclerc was given the soft tyre, while Bottas resumed on the medium compound. Hamilton and Stroll stopped one lap later to minimise the risk of an undercut. Hamilton resumed on the Ferrari teamed prepared to service Vettel’s car. Vettel lost almost 7 seconds in the stop as most of the field stopped to fit medium tyres. Ferrari were unable to release the number 5 Ferrari until the traffic had cleared the pit exit lane.

Latifi spun and brought out a local yellow flag after suffering a puncture on lap 5 as Verstappen and  Ricciardo also stopped for slicks. The move by Haas at the start of the race to change to slicks proved a masterstroke as the pair climbed to 3rd and 4th respectively behind Hamilton and Verstappen at the end of lap 5. Leclerc was the only runner in the top 10 to have changed to the soft tyre and soon began to pressure Stroll for 5th place.

Bottas moved to pass Leclerc on lap 8 only to run across a few patches of water which compromised the Mercedes’ grip level and allowed Leclerc to skip away once more as Bottas slid wide at turn 2. By lap 11, Hamilton held a 9 second advantage over Verstappen from Magnussen, Stroll, Grosjean, Bottas, Leclerc, Vettel, Albon, Perez and Ricciardo.

“Kevin you are doing perfect”, radioed Magnussen’s engineer to their 3rd placed driver. “We just need the best race time we can. The race will come after the pitstops so just do the best you can.”

Pierre Gasly’s race ended on lap 17 when he brought a luridly smoking Alpha Tauri into the pitlane. Magnussen’s time in the top 3 came to an end that same lap as Stroll moved past the Haas and then Bottas followed suit shortly after. The Haas pair had dropped to 5th and 6th but benefited from the battle between Leclerc, Albon, Vettel, Perez, Ricciardo and Sainz that slowed the freight train of cars. By lap 23 crews began to advise their drivers that rain was expected within ten minutes and recommended that drivers ran across any wet patches on the track to prolong the life of their slick tyres.

Charles Leclerc cried enough on the red tyres and dropped down to 16th after a second stop for the harder compound tyres. This promoted Daniel Ricciardo to 10th as he fended off a challenge from Sainz. After several unsuccessful attempts Leclerc moved past Norris for 13th place on lap 33. Ricciardo moved into 8th on lap 34 as the Haas driver began to struggle on tyres that had completed 34 laps.

Mercedes surmised that the predicted rain had skirted the circuit and brought Bottas in for a second stop on lap 34 and looked to undercut Stroll. It was a moved the worked for the Mercedes driver when Stroll stopped a few laps later. Verstappen and then Hamilton also stopped on lap 38 as the threat of rain seemed to have passed.

As the race moved towards two-thirds distance came word that the Red Bull Team were under investigation for drying the track around Alex Albon’s grid box prior to the start of the race, which constituted a breach of the technical regulations.

Alex Albon displaced Vettel from 5th place with 4 laps left to run, while Hamilton made a late stop for set tyres in an attempt to grab the fastest lap of the race from teammate Bottas. Hamilton gained the bonus point with the fastest lap on lap 68. Such was the pace of the top 3 that Hamilton had lapped the 6th place Vettel on the penultimate lap. Hamilton set a new lap record with a 1.16.627 and crossed the line in 1st place for an eighth win in Hungary. It also matches the record held by Michael Schumacher for most Formula One victories at a single venue and was Hamilton’s 86th Grand Prix win. 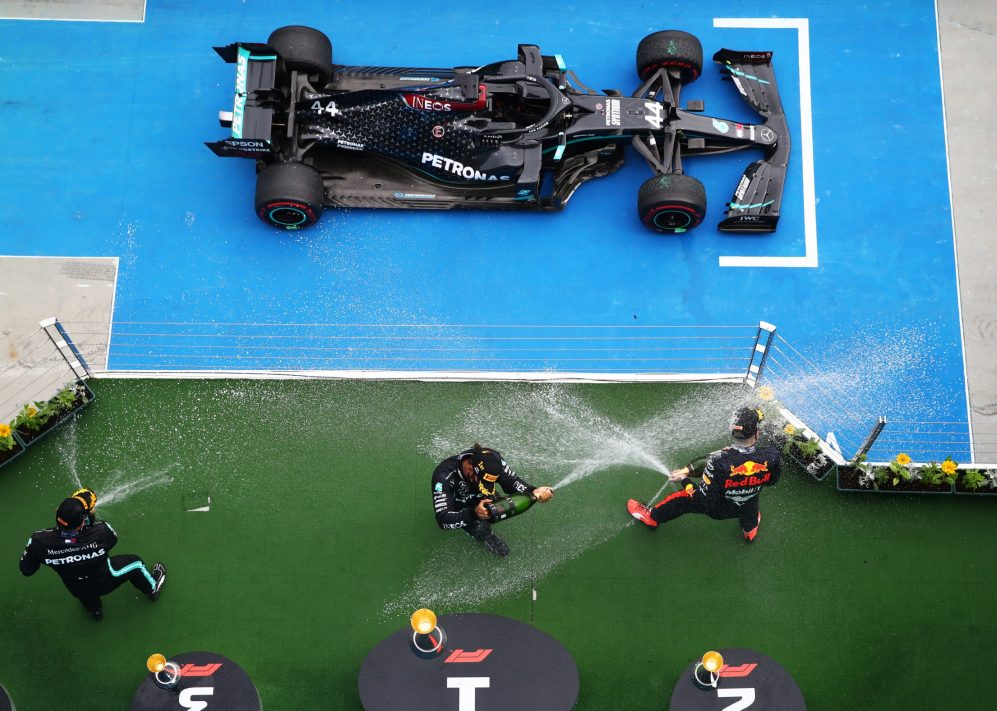 “It was one of my favourite races to have raced,” Hamilton said during the presentation interview.“Whilst I was on my own for the race, it was just a different kind of challenge.. We had great pace, great pitstops, great strategy. Right at the end because I was managing those mediums for a long, long time, It was satisfying to get a fresh set of tyres and the extra point. Round 1 was multiple different punches that I wasn’t ready for. Refocussed, which is what I try and do after every race. The last two I think have been fantastic.”

The win places Lewis Hamilton at the top of the leader board in the 2020 World Championship.

With the first of 2020’s triple headers now done and dusted, Formula 1 will reconvene at Silverstone for the British Grand Prix on July 31-August 2, followed a week later by the 70th Anniversary Grand Prix at the same track. Can anyone stop six-time Silverstone winner Lewis Hamilton from adding a couple more wins at the Northamptonshire track to his tally?