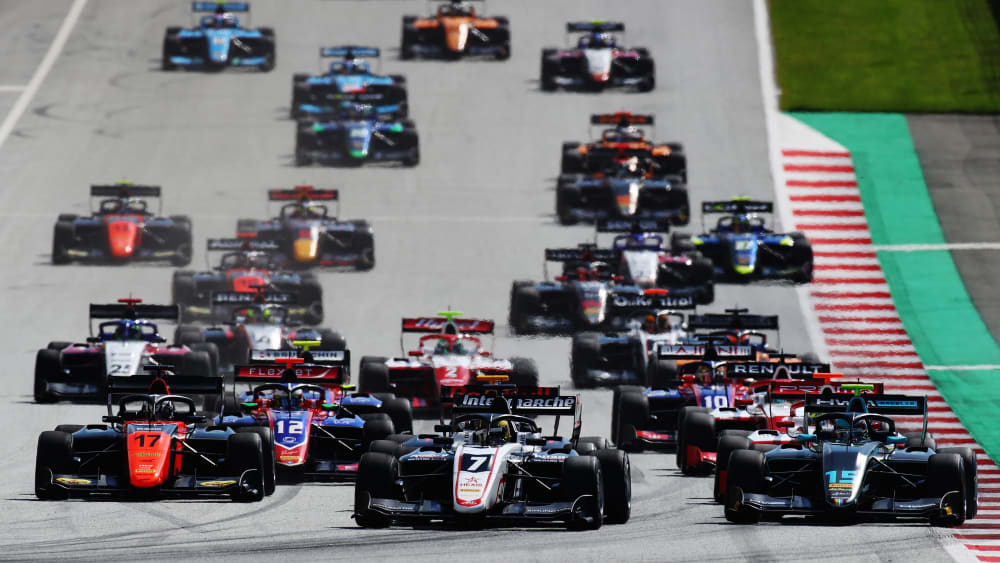 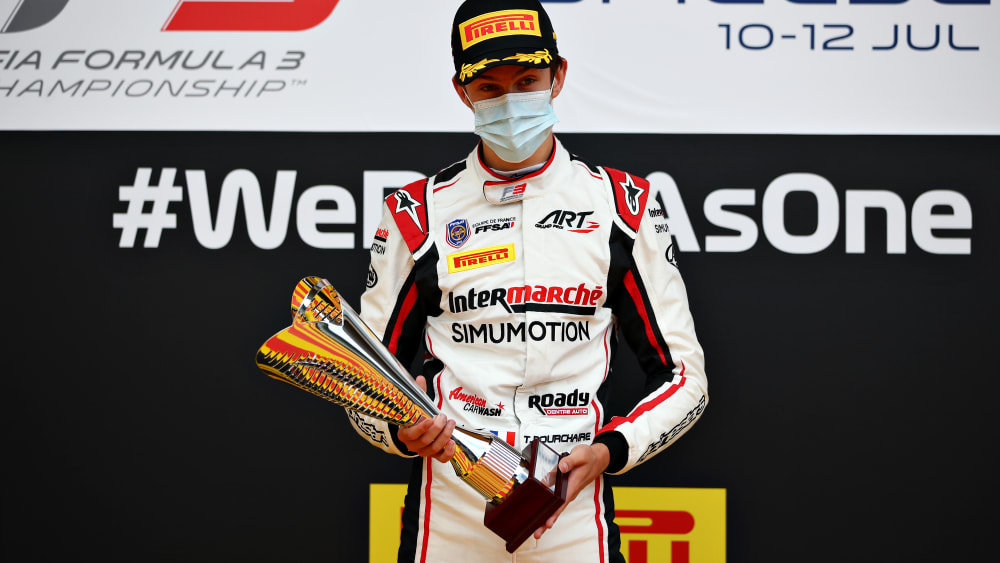 Theo Pourchaire became FIA Formula 3’s youngest winner in Race 2 on Sunday, at just 16-years-old, but his run to victory in Spielberg was far from smooth.

The ART Grand Prix racer took the lead at the start, but then spent most of the race watching on as Liam Lawson and Jake Hughes swapped the lead between them. His patience paid off, as the duo came to blows with three laps to go and handed him first, with a safety car escort to the line.

Logan Sargeant drove a measured race for second, and was another beneficiary of the late collision, while David Beckmann was able to take his second podium of the weekend in third, with a drive from eighth.

Race 1 on Saturday was ended after just 11 laps due to torrential rain, but there were entirely different conditions on Sunday. Not a drop of rain hit the track, with blue skies and a cool 15-degree temperature handing us optimum conditions for Race 2.

Jake Hughes earned a first half-point of the season with tenth in the first race, after a tough start to the year. This handed the HWA RACELAB driver reverse pole, and the Briton said yesterday that while the aim was to win, his main focus would be on scoring some solid points for the team.

It wasn’t the best start for him. Hughes was sluggish off the line, and Pourchaire certainly wasn’t as the ART driver launched into first, gliding easily into the lead.

The Frenchman held on in the opening laps, but was unsettled by the introduction of DRS. Hughes opened up and looked to get around the outside, but this provided Liam Lawson with a gap from third and the Kiwi dived between the duo and fired into first.

Hughes did manage to get ahead of Pourchaire, but it was for second and not first as planned. He had the momentum though and used this to claw the lead back from Lawson in the next DRS zone to return to his starting position.

The safety car brought a brief halt to the action, after Alex Smolyar tagged Sophia Floersch and sent her spinning out. It was a tough lap all round for Campos, who saw Alex Peroni go into the gravel trap, and Alessio Deledda damage his front wing.

Amid all the drama, Lawson managed to sneak back into the lead just in time and the Hitech racer was aiming to become the first double winner in F3 this season. The New Zealander clung on at the restart, but not for long, as he swapped places with Hughes once again. That wouldn’t last long either, Hughes locking up on his exit of the corner to allow Lawson to roar back ahead.

The battle between the front two was enthralling, although it would come to an early conclusion with three laps to go. In Spielberg last season, Hughes had been the beneficiary as Marcus Armstrong and Robert Shwartzman came to blows in the closing stages and handed him the race lead.

The Briton was on the opposing end this time around. Lawson suffered from oversteer and clipped the curb, sending him into the path of Hughes. The pair collided and Hughes was sent into the gravel while Lawson pulled up at the following corner with damage.

This handed Pourchaire the race lead, and with the safety car coming out and less than three laps to go, he was able to cross the line unopposed. The collision promoted Sargeant to second and gave Beckmann his second podium of the weekend.

Piastri holds on to the Championship lead with 44 points, ahead of Vesti on 37.5 and Sargeant on 34. Beckmann is fourth with 31.5 and Verschoor fifth with 27. In the Teams’ Championship, PREMA remain first with 111.5, ahead of Trident on 67.5 and Hitech Grand Prix on 30. ART Grand Prix are fourth and MP Motorsport fifth.

“It feels amazing to win Race 2 here in Austria. I made a really good start, but then was third for most of the race with good battles ahead of me. Then Lawson and Hughes crashed, and I was able to win the race.

“To win the race is amazing. It is only my second round in Formula 3, and I would like to thank ART Grand Prix for their amazing work with the car.”

Lundgaard lunges to maiden F2 win in the Sprint Race 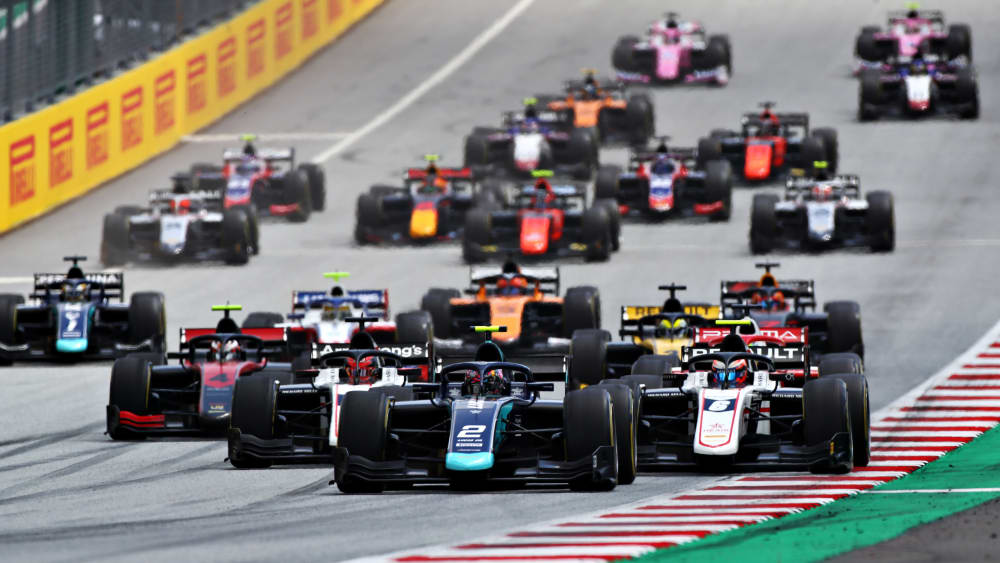 hristian Lundgaard became the fourth new winner in Formula 2, and the third rookie to do so this season, taking a dominant Sprint Race victory from third.

The Danish racer propelled himself ahead of his teammate, Marcus Armstrong, off the line and then claimed the scalp of reverse polesitter Dan Ticktum a lap later. From there, he never looked like handing back the lead.

Ticktum and Armstrong held on to P2 and P3 for their second podiums of the season, ahead UNI-Virtuosi’s Guanyu Zhou and Callum Ilott.

After such a successful Saturday, Feature Race front two Robert Shwarztman and Yuki Tsunoda both suffered from retirements in the Sprint Race, as did Mick Schumacher, whose frustrating start to the season continued.

Nikita Mazepin enjoyed his best race of the season so far, climbing from fourteenth to eighth to earn his first points finish of 2020.

Having seen the Feature Race delayed by more than an hour on Saturday due to the wet conditions, Lundgaard was in a hurry to get on with things on Sunday in the dry. The Dane sprung off the line from third, getting the better of his teammate, Armstrong.

Reverse polesitter Ticktum got away smoothly but didn’t have the pace to build up any form of gap and was quickly under pressure from the ART Grand Prix driver. Lundgaard set the fastest lap on his first tour and quickly closed in on the DAMS’ driver, before making a late, committed lunge for first to eek ahead through the smallest of gaps at the first turn.

Gaining the advantage of DRS, Ticktum attempted to claw the position back at the second and third corners, but ran out of room and was forced to back off.

By the time Lundgaard took the lead, the field had lost its front two drivers from the Feature Race. Shwartzman spun in the middle of the pack on the first lap, seemingly losing grip down the straight. Those behind him done well to avoid the PREMA, whose race was over. A lap later and Tsunoda was gone too. The Carlin driver lost power and dropped to the back of the grid, before being forced to retire.

Lundgaard extended his lead at the front to three seconds, leaving those behind him to squabble amongst themselves. Schumacher made an elegant move on Armstrong for the final podium position, leaving it late to squeeze ahead with the aid of DRS. But, he did not sit there for long, as the fire extinguisher in his car accidentally went off and he was forced to head back to the pits to retire.

Nikita Mazepin hadn’t enjoyed the greatest of starts to 2020 and failed to score points for the third race in a row on Saturday, finishing 14th. The Russian enjoyed a better time of things on Sunday, shooting up to eighth to take the final points’ position.

It was a similarly successful morning for Jack Aitken and Sean Gelael, who rose three places each to sixth and seventh.

It wasn’t quite such a strong day for Callum Ilott. The Briton lost fourth to Guanyu Zhou at the start, and despite piling on the pressure late in the race, he could not win back the position. His teammate reacted to the challenge by getting within a second of Armstrong in third, enabling him to use DRS and defend.

Lundgaard crossed the line unopposed, with Ticktum unable to challenge the Dane for the race lead. Armstrong finished third, more than 8s back, with Zhou and Ilott completing the top five.

Despite suffering a DNF, Shwartzman holds on to first in the Drivers’ Championship on 48 points, five ahead of Lundgaard and Ilott. Ticktum moves up to fourth, ahead of Armstrong. In the Teams’ Championship, ART Grand Prix are first with 77 points, ahead of UNI-Virtuosi on 70 and PREMA Racing on 62. DAMS are fourth and MP Motorsport sixth. 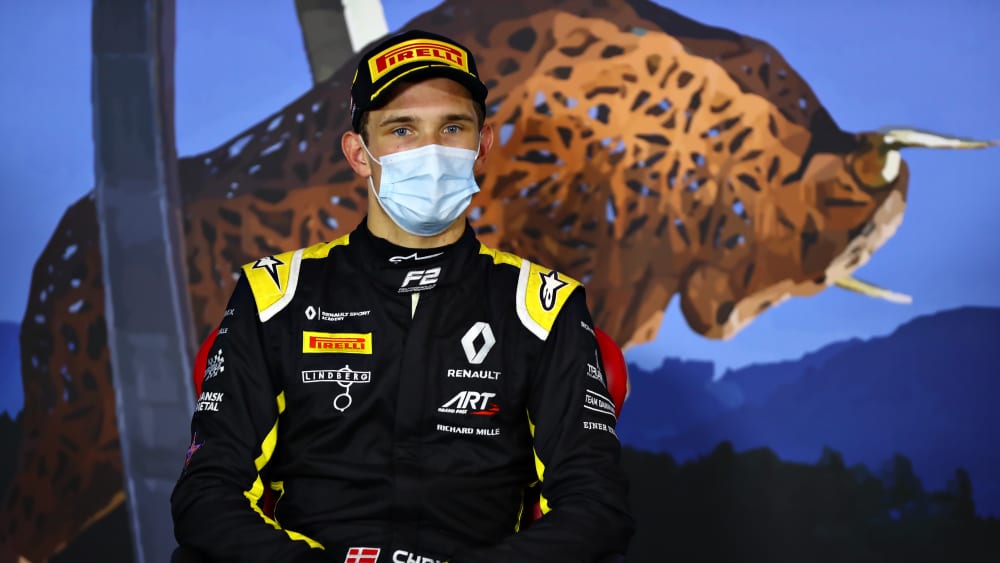 “Good day today with the race win. Yesterday I ruined it a bit more myself by taking a trip through the gravel. To be on the podium with Marcus (Armstrong) is good. I am here now though and I am happy.

“I am looking forward to next week. I have been strong in Budapest so far in my career, so I hope to get the best out of the car so that we can maximise the results.”

F2 will depart Spielberg after two weeks of racing in the Styrian mountains and head to Budapest in Hungary. Ilott will look to wrestle back the Championship lead from Shwartzman.