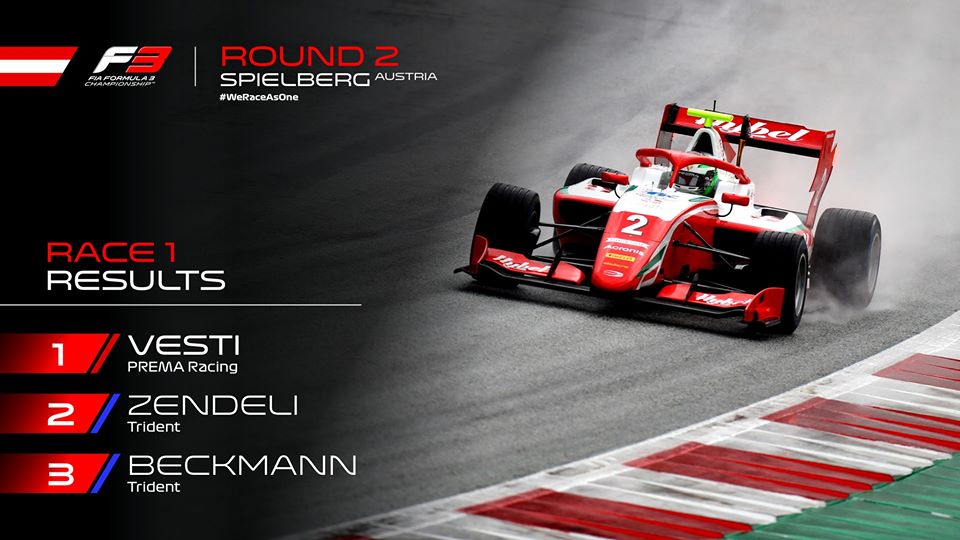 The third race in the 2020 Formula 3 Championship lasted 14 laps before the red flag was shown to the field. Frederick Vesti became the third different winner this year from the Trident pair of Zendeli and Beckmann.

Oscar Piastri had a brief look for the lead on the opening lap only to be quickly consumed by a plume of spray that made visibility difficult for all bar Vesti, the race leader. Piastri and Alex Peroni had been shuffled back at the start and hung on to the back of the lead group.

While Piastri managed to climb back to fourth, Peroni slowly slipped back towards the edge of the top 10. Race replays showed the bright orange Campos car receive contact from Verschoor on the opening lap and slowed the Australian’s pace. Further contact from Liam Lawson, when the New Zealander forced Peroni over the kerbs to avoid contact on lap 3, added insult to injury.

The Virtual Safety Car was utilised to recover the stranded car of Smolyer, who had made contact with the wall on the pit straight and then limp towards turn 3 where he parked the car. Novalek then brought out a genuine Safety Car period after contact from teammate Ahmed saw the Russian spin due to a punctured tyre. and stop on the side of the track.

The race resumed on lap 10 with Piastri passed by Caldwell. Sebastian Fernandez then brought out the red flag after running into the rear of the car ahead and then spinning across the circuit and into the wall.

Driver’s had already complained that the track was too wet to race, Liam Lawson called the conditions to his engineer “It’s really, really wet, like REALLY wet,” exclaimed the New Zealander.

Max Fewtrell was more to the point, “It’s ridiculous! I don’t know how you are expected to drive,” Fewtrell said.

The Safety Car brought the field into the pits, with the race suspended at that point.

Peroni had crept into 10th place after Fenandez’s accident and looked set for a front row start on Sunday. Luck deserted the Australian shortly after when the race was declared on the end of the previous lap, which demoted Peroni to 11th, which is where he will then start for the reverse grid race on Sunday.