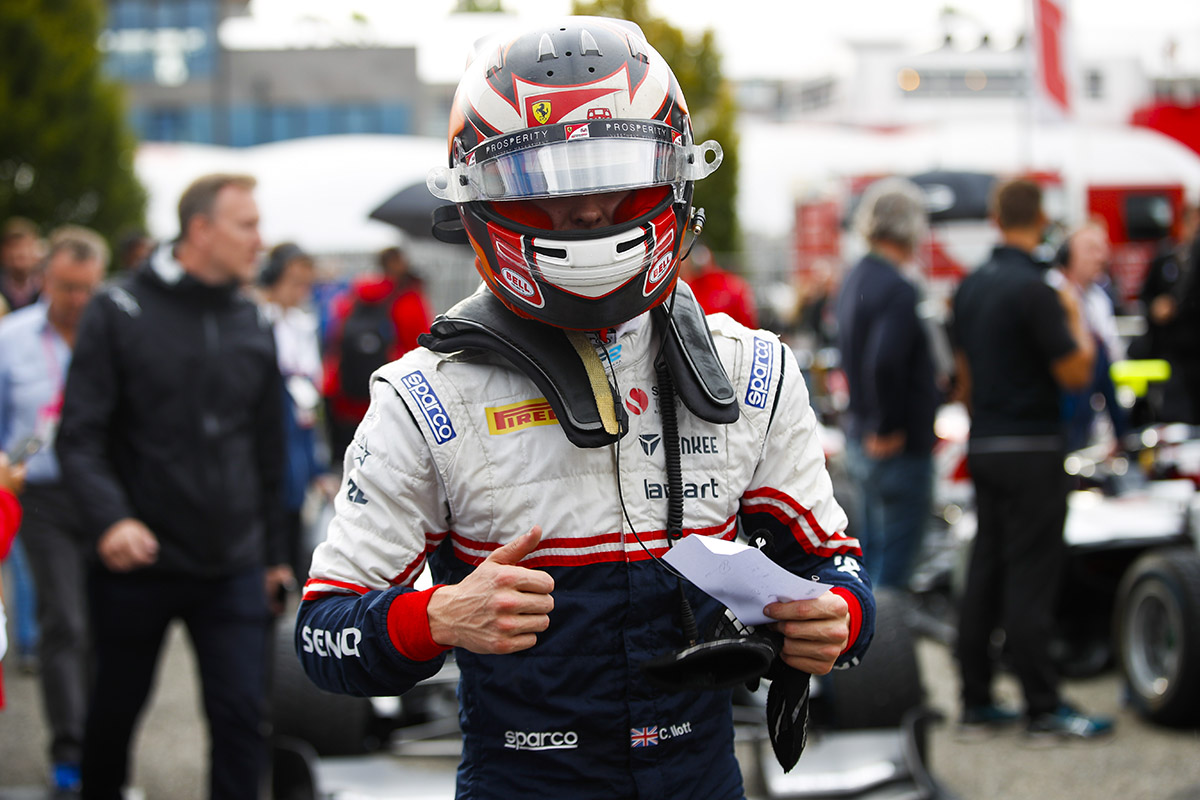 Callum Ilott took an emotional first FIA Formula 2 pole position at Monza, becoming just the second rookie driver to do so this season. The Sauber Junior Team by Charouz racer got his best lap time in early, as rain hampered the session and greased up the circuit.

The Brit who is the sole representative for his team fittingly put in his best ever performance for the team and later dedicated it to his teammate Juan Manuel Correa who was injured in last week’s Feature Race at Spa. The Ferrari Academy driver topped a trio of rookies, finishing ahead of Guanyu Zhou and Nikita Mazepin, who also scored his best ever Qualifying position.

Rain was falling as the cars first headed out onto the track and Nyck de Vries experienced the tribulations that come with a damp circuit first hand, as he wobbled at Turn 1. Luca Ghiotto was able to complete his lap smoothly and took an early lead, lapping in 1:37.906.

The Italian had finished on top in Free Practice and early indications pointed at another fruitful performance, with the UNI-Virtuosi racer further improving to strengthen his stranglehold on P1.

Just as Ghiotto looked to take control of the session, Ilott sailed around the circuit and snatched provisional pole. Zhou had a successful attempt at toppling him on the next tour of the track, but Ilott rose to the challenge and seized the spot back.

Shortly after, Nobuharu Matsushita lost control of his Carlin on the wet track and beached himself on the gravel, bringing out a red flag. Tatiana Calderon suffered the same fate, as she lightly banged the barrier and had to retire as well.

When action resumed, Giuliano Alesi and Marino Sato had further troubles with the increasingly wet circuit, but managed to regain control of their machines, to continue. Sector 2 was causing the most issues: De Vries twice went green on the first, but on each occasion, struggled on the second and couldn’t manage any higher than fourth place.

The remainder of the field had the same struggles and no one could improve enough to trouble the top three, as Ilott ran home ahead of Zhou and Mazepin. De Vries and Sérgio Sette Câmara completed the top five, followed by Matsushita, Nicholas Latifi, Jordan King, Mick Schumacher and Louis Delétraz.

Ilott will be aiming for his first ever win in the Championship when the cars take to the Autodromo Nazinoale Monza circuit, at 4.55pm local time.