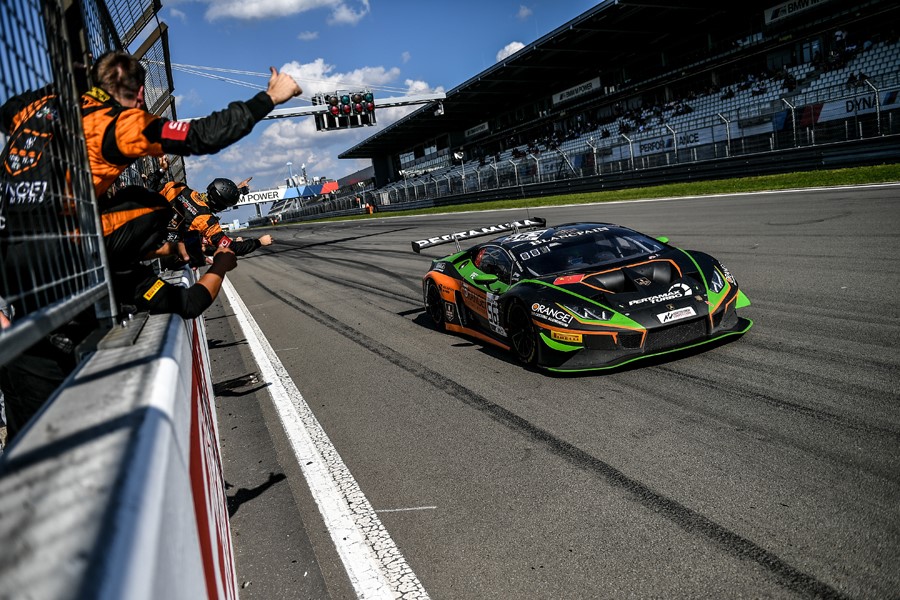 Orange1 FFF Racing’s Andrea Caldarelli and Marco Mapelli extended GT World Challenge points with one round remaining and took the Blancpain GT overall lead after claiming their second overall victory of the season at the Nürburgring circuit in Germany. The pair led a spectacular Lamborghini one-two in the opening race of the weekend on Saturday, finishing ahead of the polesitting #63 Grasser Racing Team Huracán GT3 Evo of Mirko Bortolotti and Christian Engelhart, before adding a strong third place in Sunday’s second race.
Mapelli qualified the #563 Lamborghini Huracán GT3 sixth for Race 1 and made good progress up the order after a slow start. Ahead of the mandatory driver-change pit-stop, Bortolotti held a narrow lead of half a second over the chasing Mercedes-AMG of Luca Stolz and Maro Engel. Bortolotti made his stop and swapped with Engelhart, who returned the #63 to the circuit still in the de facto lead of the race. Mapelli brought the #563 into the pits near the end of the window and changed with Caldarelli, the pair moving up to an effective second place once the window had closed.
Once the stops were completed, Caldarelli was the fastest driver on track and began to claw into the lead of Engelhart as the race entered its closing stages. Caldarelli was then all over the back of Engelhart in front, but had to keep an eye on the third placed car of Christopher Haase in the Sainteloc Audi R8. Entering the final 10 minutes, Caldarelli went for an overtake on Engelhart under braking for Turn 1, but the two cars touched slightly, which pushed Caldarelli wide on exit. That allowed Haase to briefly get into second place, but the German ran wide at Turn 6, which gave Caldarelli the position back.
Now with the bit between his teeth, Caldarelli went around the outside of Engelhart at Turn 7 and completed his surge to the lead of the race under braking for the downhill Turn 8. Once in the lead, Caldarelli broke clear and took a comfortable 9.047s victory at the flag. Engelhart displayed remarkable defensive nouse to keep Haase behind him and guarantee a Lamborghini one-two, and more importantly, the lead of the championship for the #563 FFF Racing crew.
Sunday’s second race was a different affair altogether and one which was not kind to the #63 crew of Bortolotti and Engelhart. A difficult qualifying session meant they only started 10th on the grid, which became 15th after a tricky opening lap. Caldarelli qualified seventh and ran as high as fifth in the early stages. The #563 was clearly the better placed of the Lamborghinis and showed great pace either side of the pit-stops to move into fourth place, ahead of the #4 Black Falcon Mercedes of title rivals Stolz and Engel. With the #4 receiving a drive through penalty for an unsafe release in Race 1, getting ahead of the German pairing at the stops in Race 2 was crucial. Fourth then became second as the leading WRT Audi R8s of Ezequiel Perez Companc and Charles Weerts made contact with each other while disputing the lead at Turn 1. Both retired and gave the Aston Martin of Ricky Collard and Marvin Kirchhofer the lead of the race, which they kept till the flag.
Mapelli brought the #563 home third behind the Audi of Simon Gachet, while Hiroshi Hamaguchi and Phil Keen finished a strong second place in the Pro-Am category.
Andrea Caldarelli, #563 Orange1 FFF Racing Lamborghini: “We started from P6 and everybody knows it’s not easy to overtake at the Nürburgring. When I was second, I tried to attack Christian as much as I could. I tried on the outside at turn 1, but we had a small contact. I was afraid to lose my power steering afterwards, but luckily this was not the case. At the end you just need to be patient and I had an opportunity to take the lead later.”
Marco Mapelli, #563 Orange1 FFF Racing Lamborghini: “The start was ok and we gained one position, then our pace was very good: the team has made a great preparation job for this race and the stint too has been amazing. Andrea has made a very good job and a great overtaking. The result is good win and good points: let’s go on like this!”
Elsewhere, there was further success for Lamborghini in the Barcelona 24 Hour race, where Barwell Motorsport secured overall victory courtesy of Lamborghini Factory Driver Dennis Lind, at the wheel of #77 Huracán GT3 Evo n. 77 flanked by Adrian Amstutz, Leonid Machitski e Patrick Kujala. So strong was the pace that Dennis Lind crossed the line to complete 690 laps of the 4.655km Circuit de Barcelona-Catalunya, a new event record on the full Grand Prix layout. Fuel was still a concern though for the British team heading into the final hour.
“You don’t want to run out of fuel, but you also don’t want to get caught,” Dennis Lind added at the end of only his third 24-hour race. “So the team did a flawless job guiding me, and they made it look easy. Third time’s the lucky one, I guess!”