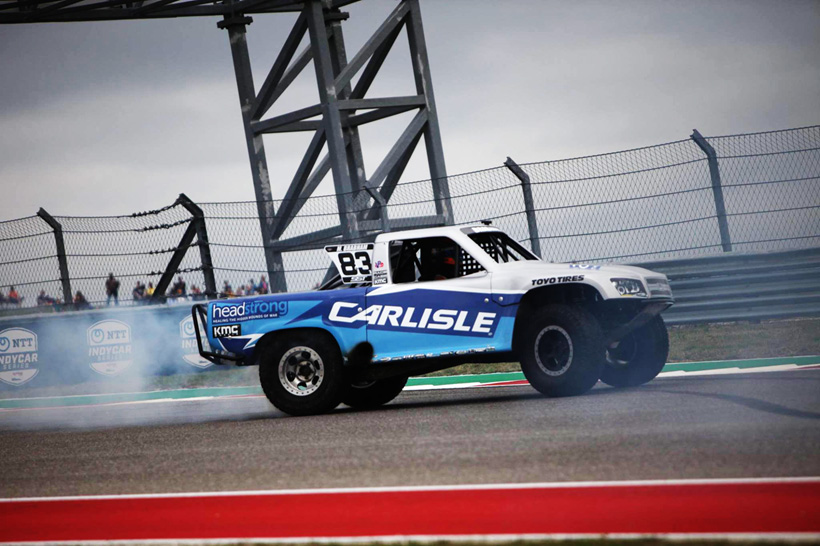 Defending Stadium SUPER Trucks champion Matt Brabham picked up where he left off with a race and overall round win in the opening round of the 2019 season at the Circuit of the Americas in Austin, Texas today..

It was a hard-fought weekend with the elements lining up against the champion; Brabham lost out in race one and overnight came down with suspected food poisoning. Starting the weekend off with a bang, Brabham was quickest in qualifying for race one. Which meant with the grid inversion, the dual Australian-American was at the back of the group. However, he sliced his way through the angry pack and made it to third before the competition caution bunched them back up again.

Just before the restart, race leader Gavin Harlien pulled into the pitlane with a mechanical issue promoting Brabham to second.

It was then a gloves-off battle between Brabham and Blade Hildebrand for the race win.

Brabham made incredible ground on the Californian and was in a position to move around him for the lead.

Hildebrand, Brabham and Robby Gordon were three-wide coming to the jump off the top of turn one. Brabham unfortunately was pushed wide and hit the jump at an angle and with just two wheels.

Losing momentum and running wide, Brabham had to concede and fell back to fourth.

It was then Brabham realised that the mis-judged jump had also ripped the brake lines from the front of the truck. He was able to recover a bit of braking power by using the handbrake for the rest of the race. Brabham crossed the line in 6th, but took the time to teach race-winner Hildebrand how to properly celebrate.

Hildebrand rolled his truck during his post-race celebrations and Brabham took the opportunity to two-wheel past the stricken truck, before hooking back and performing a few donuts.

The second race of the weekend was Brabham’s chance at redemption.

The #83 Carlisle truck started the race off the third row in 5th, however Brabham had a visit to the medical facilities at the track to ensure he was ready to race.

Overnight the 25-year-old had come down with an illness and had been feeling quite unwell before climbing into his truck. He was cleared to race, and eager to make up for yesterday’s could-have-been. It only took the first lap for Brabahm to claw his way onto the podium in third and before the competition caution he had moved into second.

On the restart, Brabham fell into the clutches of Jeff Hoffman, however Hoffman missed the first jump and was then preoccupied with keeping Hildebrand behind. Leaving Brabham the breathing room he needed to chase down Harlien.

With two laps to go, Brabham was hot on the heels of Harlien, eventually coming up the inside of his truck and nudging ahead for the lead.

Harlien fought back, the two touched and Harlien demoted Brabham to second.

It was a small lock up from Harlien and a brave move from Brabham that secured the lead in favour of the defending champion.

Brabham left the pack of six trucks to argue about the remaining podium places and checked out with an uncatchable lead.

It was a maiden win in 2019 for Brabham as he launches his title defence.

Stadium SUPER Trucks are in action again next weekend at Texas Motor Speedway as an undercard to the NASCAR Cup Series (March 29-31).

WHAT MATT HAS TO SAY…

“Qualifying on Saturday was a really great way to start the weekend off. We had good speed and scored pole position. The five points from pole really saved me this weekend. It was super tight on points,” said Brabham

“In race one I got right back into the swing of things and made decent ground. We were fighting with Hildebrand and Gordon and didn’t come to the jump straight and two wheels fell off the side. It just pulled the brake lines off and that made it a bit difficult for the rest of the race.

“After the race I saw Blade come up to the jump and put it up on two-wheels and roll. I was laughing, you can’t do that and not expect to get a hard time. I came up beside him and showed him how it’s done.

“Coming into race two I knew Robby was ahead in the overall points, and we were behind him tied with Blade and Hoffman. It was on for the race and I was able to get through the field. Everyone was going for the inside and outbreaking each other and I was able to come out on top.

“It was a great finish to the weekend and a start to my title defence. It was also great to bring Carlisle up on the podium with me”.