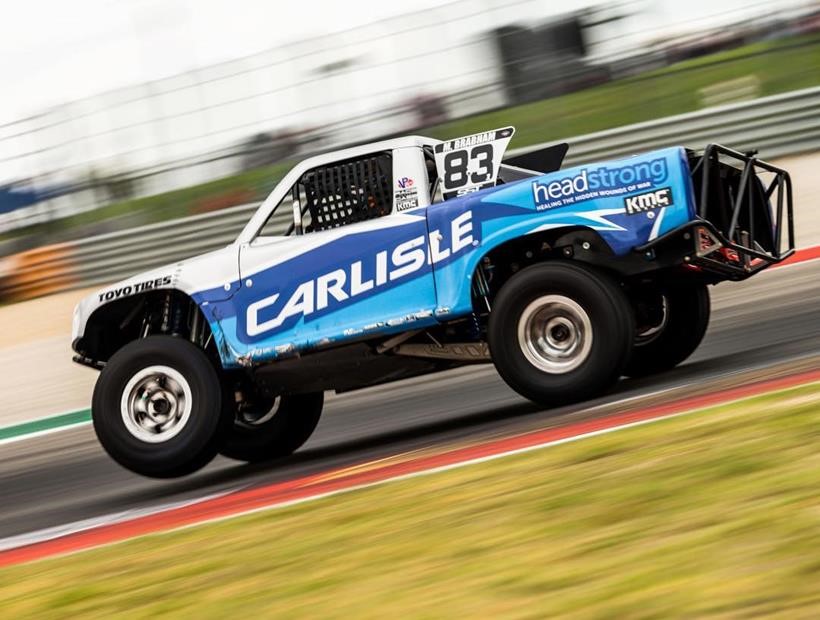 Matt Brabham will be on a mission to prove everything is bigger in Texas when he competes in the second round of the Stadium SUPER Trucks championship at the Texas Motor Speedway in his Carlisle entry this weekend.

The reigning SST champion got his title defense off to a solid start with a race and round win as part of the IndyCar Series event at the Circuit of the Americas last week and returns to TMS full of confidence.

This weekend’s event will be a support for the seventh round of the NASCAR Championship and at a venue Brabham knows well.

The temporary circuit combines a part-dirt section on the in-field before a jump sends the field on to the main straight of the permanent and paved 1.5-mile (2.4km) oval.

During the first race of the Stadium SUPER Trucks at TMS last year, Brabham approached the jump on the main straight in an awkward fashion after his bonnet flew up and completely obscured his view.

He wasn’t able to judge his approach to the jump despite being totally committed to it and his truck hit it at an angle, causing the #83 machine to roll several times.

It was an incredible recovery, with Brabham finding his wheels and continuing on with the race.  The truck was re-built overnight, and the third-generation racer won the second race of the weekend and claimed second overall for the round.

The 25-year-old now looks to do the double, carrying his winning form from Circuit of the Americas last weekend into the second round of the 2019 championship.  Brabham has spent the week recovering from a bout of food poisoning that struck him last weekend.

“I’m excited to be back on the scene of last year’s race in a new-look Carlisle truck. That was an up-and-down weekend but we were able to bring it home in the end,” said Brabham

“It’s awesome to be here at Texas Motor Speedway with NASCAR. The crowds are incredible, so we hope to put on a great show for them.

“We were strong in Texas last year and I’m looking forward to continuing our run of form.

“I’m definitely more confident on dirt than I was last year. After the Glen Helen Raceway round, I think I’ve proven myself a bit. So the dirt parts of the track this year aren’t that much of a threat.”