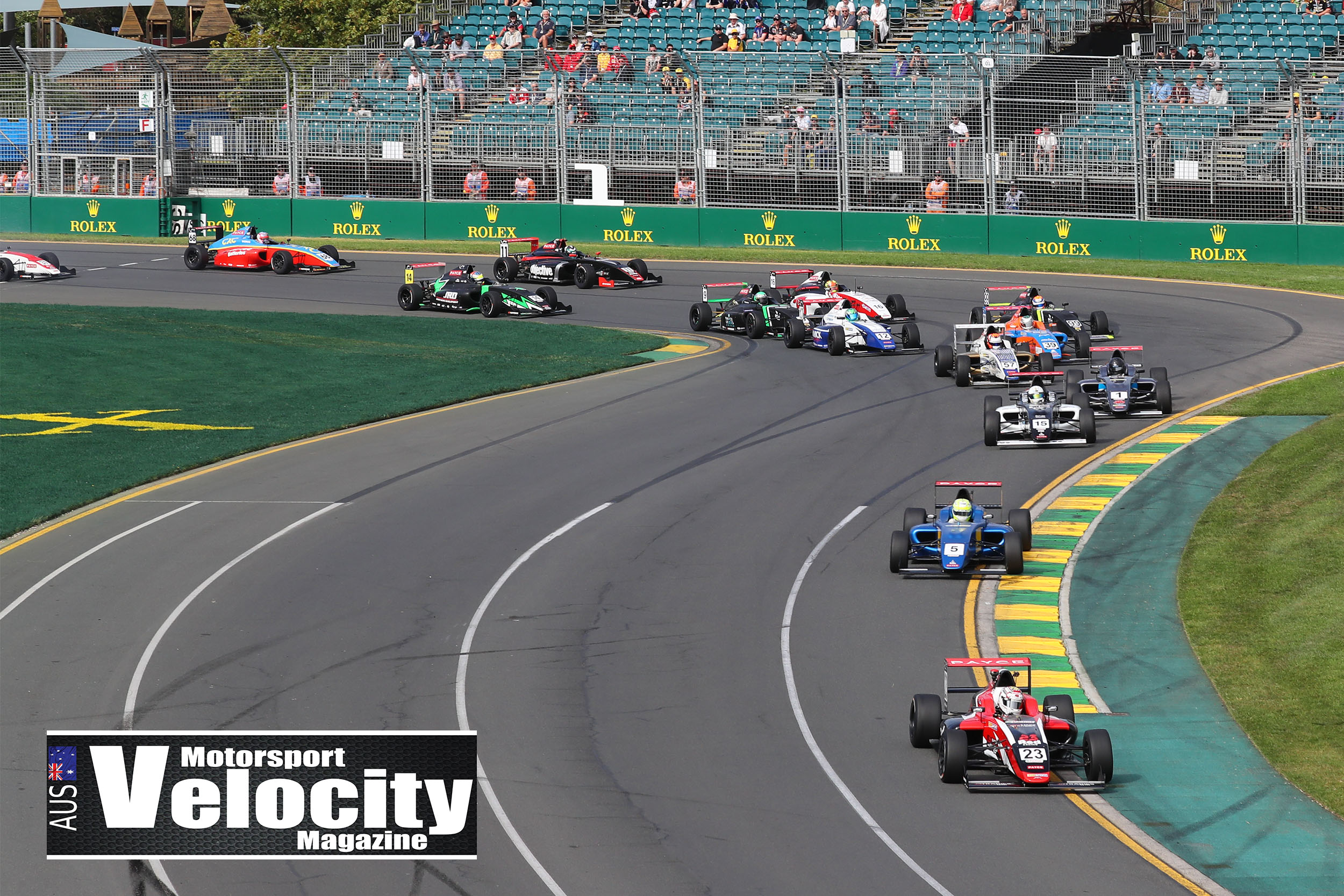 AGI Sport’s Luis Leeds has converted pole position into a race win in the opening race of the 2019 CAMS PAYCE Australian Formula 4 Championship at Albert Park.

Leeds had a lightning start off the line, though fellow front-row starter Jayden Ojeda lost massively at the start dropping from second to seventh in four corners.

On the approach to turn three, Jackson Walls out-braked himself into the gravel trap. Soon after, Heath Collinson and Christian Lester connected wheels and joined Walls in the gravel trap. (Below)

After a three-lap safety car interruption, there was a fast four-lap dash in the 20 minute time certain race. Leader Leeds shifted too high a gear through the fast Turn 11-12 complex and had the Team BRM duo of Ryan Suhle and Lochie Hughes chasing his tail.

The chequered flag appeared as he crossed the start-finish line, much to the relief of Leeds to win by 0.14 seconds.

“Incredible. I’ve had so much pressure building up to this race. It’s been a lot of hard work from the people who have been supporting me,” Leeds said.

“To get the start I did and pull away, I wasn’t happy to see the safety car boards come out. I’m glad I was able to get a good restart and had a great car underneath me to come away with the win.”

Suhle was the top Team BRM driver in second place, in what was his race debut with Team BRM for 2019.

“It was a short race for us because we had the safety car, everyone’s arms were hurting after that – it’s a long lap,” Suhle said.

“I really enjoyed it. I think to get a good start too, this was my first start in a BRM car. It’s a little bit different to how they setup the clutch compared to what I’ve been used to in the past. To get a cracker start and go from third to second was really good.”

“Third is a good way to start the year,” Hughes said.

“All in all it was a good race to bank points for the championship. We have good pace, we’re happy for the rest of the weekend.”

AGI Sport’s Jackson Burton was the best Formula 4 debutant in fourth place, ahead of teammate and 2018 Champion Ojeda.

“It’s an amazing result for my first race. I didn’t expect to do that well off the start, but I rocketed off the line and sent it into turn one,” Burton said.

“I’m excited to go out and do it all over again in race two tomorrow.”

Another eight lap race will take place on Saturday at the Formula 1 Rolex Australian Grand Prix from 11:50am AEDT.