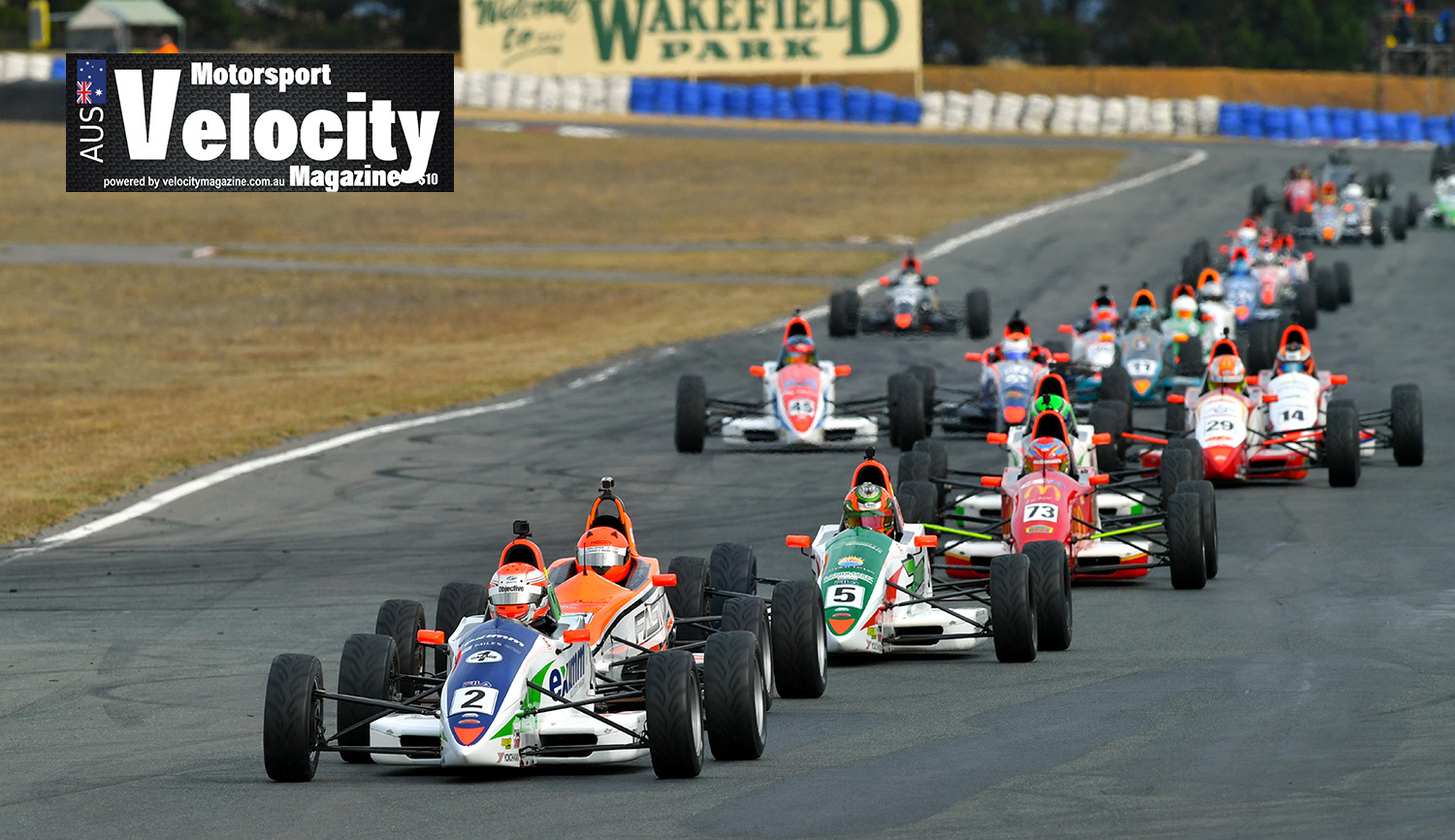 Fine, sunny weather greeted competitors for the trophy day at the NSW Motor Racing Championship at Wakefield. Sports Racers finished their meeting on Saturday with the NSW Production Sports category taking their place with qualifying and two 30 minute races scheduled for the day. Daniel Gaunt was heavily favoured to win, with David Stevens in the 458 Ferrari and Andrew Macpherson in the Porsche the most likely for the minor places.

As expected, Daniel Gaunt controlled both races from the front. David Stevens and Daniel Jilesen tried to stay with the KFC Audi R8, but Jilesen’s hopes were dashed by a left door which peeled back from the Marc Car and forced Daniel into the pits for repairs. Andrew Macpherson had been 4th for the first half lap until he tried to brake for the fish hook, the tyres were still not up to temperature and the Porsche GT3R spun at the entry to the corner. Andrew was fortunate to emerge unscathed as cars weaved around the red and white car. Gaunt won the first race from Stevens and Marcel Zalloua in the Porsche 997 GT3.

The second race saw the same finishing order as David Stevens received a 5 second post race penalty. Daniel Jilesen was a late dnf on lap 30 as only Stevens was able to remain on the lead lap.

Thomas Randle won the meeting as Tony Ricciardello encountered a problem in the final event. Ricciardello won the earlier race, the Alfa driver narrowly avoided an incident with Joseph Said when the Fiat driver spun to the outside of turn 3 and came back onto the track just metres from the leader.

Randle looked to drive around the outside of a slower starting Ricciardello in the final race. Steven Lacey also looked to move alongside the Alfa. The pair made contact into the braking area at turn 2. Tony limped back to the pits as Lacey stopped at the exit of the fish hook. The Safety Car then called for the stranded car as well as the John Spiteri Lancer, which had been pushed into the tyre wall at turn 1 with Chris Muscat. Muscat was able to limp into retirement, although Spiteri’s car remained against the tyres for the remainder of the race. Ricciardello dropped a lap as his car was inspected and then fought back through the field to finish 14th. Randle won from Steven Tamasi and Birol Cetin.

Hunter McElrea set a new record for Formula Ford at Wakefield Park by taking all three wins across the weekend. This brought his winning streak at the venue to four in a row, which surpassed Cameron Hill’s previous best of three straight wins. Bart Horsten and Hamish Ribaritis continued to occupy the minor places as they struggled to find a way past McElrea. Liam McLellan had a troubled run in the final race after he was lifted on the front upright of the Callum Hedge Spectrum when the field suddenly bunched for an early Safety Car. McLellan’s race ended shortly after when an ambitious move at turn 2 saw him lock a brake and spin off at turn two, taking Jake Donaldson with him in the process. Donaldson dropped down the order to finish 19th.

Matthew Holt won the final race for Production Cars from Darren Herbert and Stephen Thompson. Max Winter had been in contention for the win only to lose ground when he ran wide at turn 2. He then misjudged a pass on Adam Gosling and made contact with the BMW at turn 2, which spun Gosling across the track. Winter was later excluded from the results for the incident.

Brett Osborn overcame a determined challenge from Chris Molle to win the HQ Trophy race after Molle had led for much of the final race. Duane Cambridge shrugged off some early challenger to finish a rather loney 3rd.

Jason Hendy led the field for the final race in the under 2 litre category as Harrison Cooper fought his way through from 4th on the grid. Hendy started from pole couresy of his win in the first race of the day. Hendy appeared to have established an unbeatable lead, but was rapidly caught by Cooper in the dying stages of the race. Hendy appeared to have been given a lifeline when Cooper locked a brake at turn 2 and then missed a gear change at the exit, which allowed Hendy to skip away. However, in the space of a lap, Cooper caught and passed Hendy for the win. Kurt Macready took 3rd for the weekend.

Michael King took a flag to flag victory in the Over 2 Litre Trophy Race in the Lancer Evo 8 from Trevan Spiteri and Stig Richards. Just 7 cars completed the final race as first Ian Quimby then Peter Hennessy and finally Bob Brewer toured into the pitlane to retire.

Richard ‘Spike’ Goddard took the win in both of the Formula Races from Nathan Gotch in the AGI Sport F307 Dallara. Gotch followed the grey Dallara F308-11 for the first half of the race, but slowly fell back as the race neared the end. Shane Wilson finished 3rd in the F305 Dallara while Robert Sviderskas and Graeme Holmes  retired on lap 11 and 5 respectively.