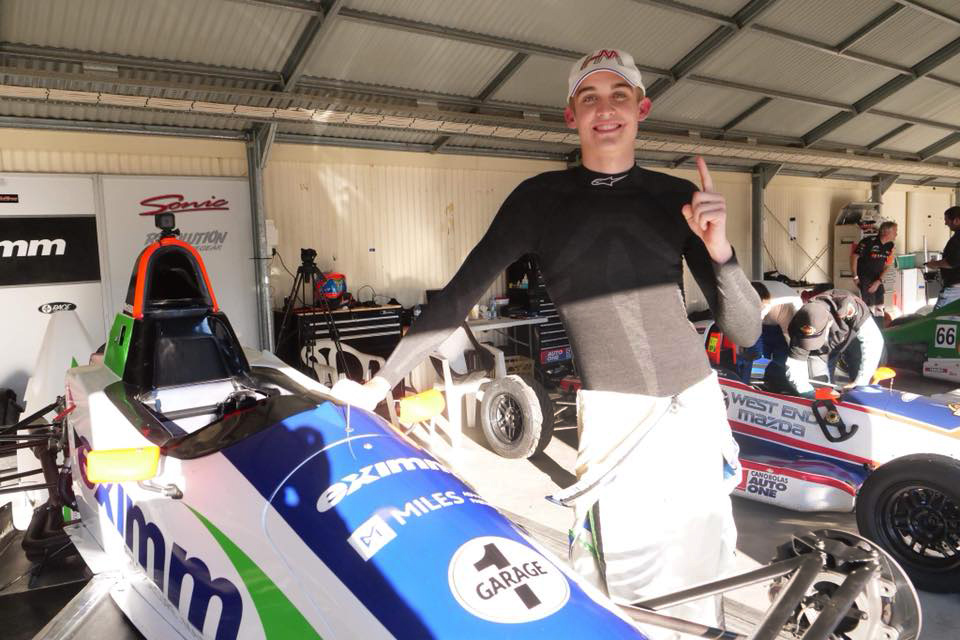 Day 1 of the NSW Motor Racing Championship at Wakefied Park was run under clear skies with a mixture of State and National series mixed together for the weekend.  (Photo – Hunter McElrea Facebook)

Formula Ford and Sports Sedans were two of the categories that ran with points for both championships, while Supersports, Formula Car, Production Touring, HQs and Improved production were on hand in what was a very full day of racing.

Hunter McElrea won the first of three Formula Ford races for the weekend. Hunter lead the field away and maintained the position throughout the race. Bart Horsten looked likely to challenge as McElrea ran wide at the fish hook, but some excellent race craft allowed Hunter to close the door. Hamish Ribarits and Lachlan Mineef ran with the leader for the opening laps only to fall away as they fought for position. Their battle was so intense the pair were eventually caught by the third group of cars. Cameron Shields moved forward from his mid pack starting position, while Liam McLellan dropped back to 17th at the finish after running wide at turn 10 on the opening lap and then spun at turn 6 as he tried to move back through the field later in the race.

Thomas Randle and Tony Ricciardello staged a fight for supremacy in the opening race for Sports Sedans. The pair made contact on numerous occasions as the race drew to an end. Randle followed the Alfa driver for the first half of the race before he made a move for the lead at the fish hook, the pair ran side by side down the back straight and made contact on at least three instances before Ricciardello dived to the inside at turn 10, ran the ripple strip and made contact again with the black Saab. Randle edged away in the final laps to win from Ricciardello with Steven Lacey 3rd.

Darren Barlow took a clean sweep of wins in the Supersport category. Peter Hills finished second in race 1 then failed to appear for the final events. Mitchell Neislon took second in the other races as John Beck, Paul Braico and Darren Kurzok each took a 3rd place finish.

Clay Skinner won the opening race for Production Cars in the EvoX from Tony Virag and Matthew Holt. Michael King took his Evo 8 to the win on Improved Production Over 2 litres and Harrison Cooper was the victor in the under 2 litre race.

Nathan Gotch was too good in the Formula Cars race and Brett Osborn was the victor in the HQ race.

Production Sports join the schedule for Sunday with trophy races scheduled for later in the day for the State level competitors.