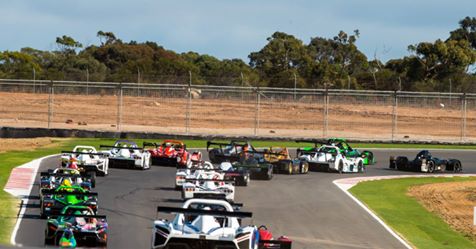 THE long-term future of the Australian Prototype Series (APS) presented by Hot Wheels continues to take shape, with series management outlining their Vision and Strategic Planning for the next period of growth.

Key amongst the future planning is the phased introduction of LMP3 vehicles to the category.

Dubbed ‘Prototype:2019’, APS directors have today outlined plans to enhance the Australian Prototype Series as the home of international-style Prototype racing on the domestic scene, via the potential introduction of suitable current specification Prototype vehicles from Europe, Asia and America into the series from 2019.

The APS evolved from the former Sports Racer series two years ago, to be a more inclusive and open category, providing more opportunities for people to compete affordably and competitively.

The first major step in that evolution is presently underway, with Type-CN Prototype cars and Radical’s V8-powered SR8 models now eligible and competing for the first time.

That shift was instantly proved beneficial following the introduction of three Wolf GB08 Type CN prototypes into the category.

A gradual shift from short sprints to longer races is also a feature of the 2018 calendar for the first time.

Prototype: 2019 includes the phased introduction of LMP3 specification vehicles into the category commencing next year, with discussions having commenced with both CAMS and several constructors of eligible vehicles.

As previously reported on Velocity Queenslander Racer Harri Jones is to have his first LMP3 run later this month in Europe.

To accommodate the new LMP3 cars, APS directors have proposed an expanded four-class structure for 2019: including P1 (CN, class 2A and Sports Racing cars), P2 (Kumho Cup – for non-seeded drivers in P1 cars), P3 (for LMP3 vehicles) and a dedicated Radical class.

The growth of the third tier of Prototype Racing, including the Chinese Endurance Series and the IMSA Prototype Challenge, showcases the current level of interest in the class around the world.

Australian Prototype Series directors believe the introduction of those vehicles to Australia would be a viable addition to the field, as well as offering local and international drivers a competitive and professional place to drive those cars locally.

It would also offer young drivers a logical and more affordable place to gain experience on local circuits before chasing a Sports Car career in Asia, Europe or America.

Envisaged, too, is a direct involvement by the APS in Asia so as to foster and promote the interests of local drivers who wish to race overseas.

Therefore, a continued shift to include more longer-distance races is also included in the Prototype:2019 planning.

International Sports Car and GT racing ace James Winslow has extensive racing experience in LMP3 cars in Asia and Europe and is enthusiastic about their potential introduction to the local scene.

Winslow has worked with several Australian drivers to assist them in securing LMP3 drives in Europe, Asia and the UAE and believes an Australian-based home for the cars is essential.

“The timing is definitely right for the introduction of LMP3 cars into Australia and this region,” he said.

“LMP3 cars are the perfect platform for the local market. They have enough performance that they can prepare drivers for LMP2 or P1 cars, but the controls in place mean they are still relatively affordable to run and are also fantastic for Pro-Am or Amateur drivers to race.

“To be able to keep some of our local talent here in a strong Pro-Am style series would be fantastic, and more drivers would get access to these great cars that are dominating the Sports Car scene worldwide.

“LMP3 cars are lots of fun to drive, extremely safe and what people perhaps don’t realise is how versatile these cars are.

“They are obviously amazing on bigger tracks, but they work just as well on smaller circuits and in a lot of instances run in multi-class fields as well, which would work perfectly for the Australian scene.

“I have spoken to both manufacturers and teams who are both keen to see the introduction of LMP3 to this region and would definitely support it.”

The series is looking forward to continuing discussions with CAMS, Competitors and major stakeholders ensuring the progression of Prototype Racing in Australia.