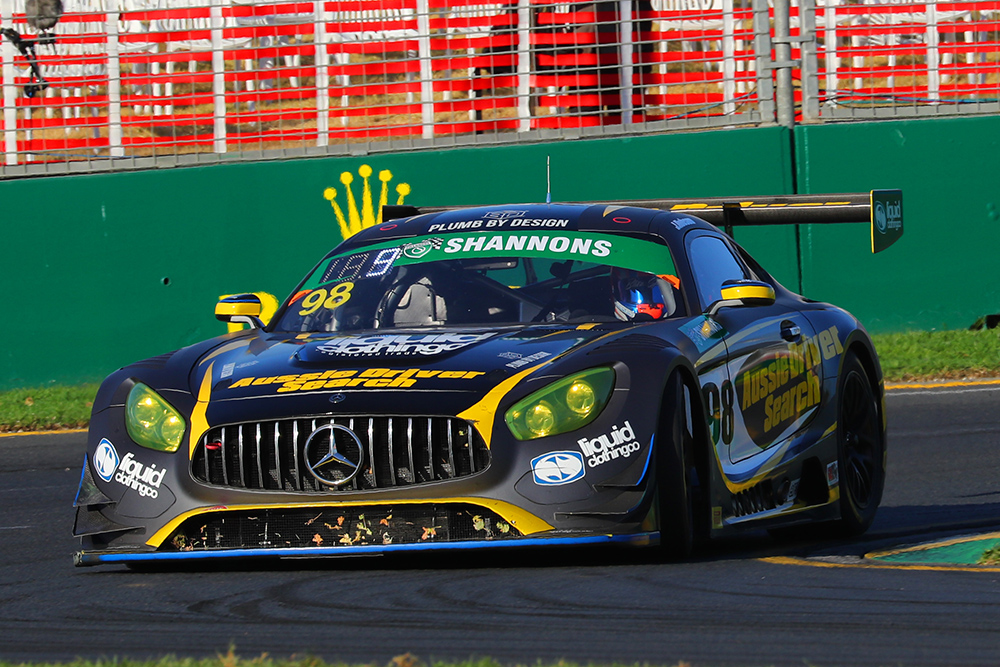 Coming into the weekend Robson only got to see the car for the first time on Wednesday and had never driven a GT car at all.  After winning the first ever Aussie Driver Search program in 2016 he then went on to complete a season in the Aussie Racing Cars last year where he finished fourth for season.

“Racing at the Australian Grand Prix has always been a dream and for it to come true and have the success I had on the weekend is still mind blowing, unbelievable. Certainly the best win of my career, only having seen the car on Wednesday, never driven a GT3 car before and first time sitting in the Mercedes-AMG GTS” Robson told Velocity.

Straight out of the box Robson had the car under control, Thursday morning for the Australian GT class was practice and qualifying combined in the 20 minute session and to put the car 13th on the grid in a field of 31 GT cars was great work.  A class act even seen as the GT’s included top drivers like Craig Baird, Tony D’Alberto, Steve Richards and ex F1 driver Giancarlo Fisichella.

“Thursday morning for the first Qualifying session was a bit daunting but I think I adapted well and kept getting faster and faster as the weekend progressed on, having then qualified 3rd in the second qualifying” said Robson

The first race for the event was on Thursday afternoon which saw Jaie finish in sixth place from Dominic Storey in another AMG Mercedes.  The second race was slated for 11am on Friday morning but an incident at the track that damaged a wall meant the GT race was postponed until 7pm that evening.  The race started in twilight and was completed in the near dark, Robson spent 9 of the 11 laps dicing with Fraser Ross trying to force him into an error, in the closing laps he pulled off a crazy pass over the back of the circuit on Ross and was able to make a 5 second gap at the chequered flag to take his first ever win.

Race three Saturday morning was in horrid weather conditions, pouring rain saw the race start under safety car with another one during the race, which had the event finish under safety car.  Robson completed the race in eighth position.

The finale for the Australian GT’s came Grand Prix race day Sunday, Robson was on pole and from the lights out to flag fall he lead all the way, a commanding win over the class field, and in front of an international racing community.  Robson results were good enough for him to take the round win for the weekend.

Kyle Austin the creator and owner of the Aussie Driver Search program had this to say to Velocity, “We are proud to be sponsoring our 2016 winner and enabling him to achieve this awesome result, how good is that!!”

We asked Robson to give us a round up on his weekend, “To have 2 wins and the overall round win is amazing. [I’m] proud of the team from Mark Griffith with all their efforts of the week, my amazing sponsors, Aussie Driver Search, Liquid Clothing and Plumb By Design, also my dad for the amount of effort he does towards my racing is incredible and I can’t thank him enough”.

“I also want to thank Barry Ryan from Erebus for helping me out on the Tuesday before the race, by giving me an opportunity to use their [motionforce1] simulator which I think dramatically helped me in preparation for the race here in Melbourne”.

The Melbourne Formula One Grand Prix is a very special event to not just race at but to win at, its the best opportunity to race in front of very influential racing industry big wigs, its also special as on the podium for the support class winner the Australian Anthem is also played, and as the track commentators said when it played for the Australian GT’s, it was playing specially for Jaie Robson.

DON’T MISS OUT ON VELOCITY – GET YOUR SUBSCRIPTION QUICK – CLICK