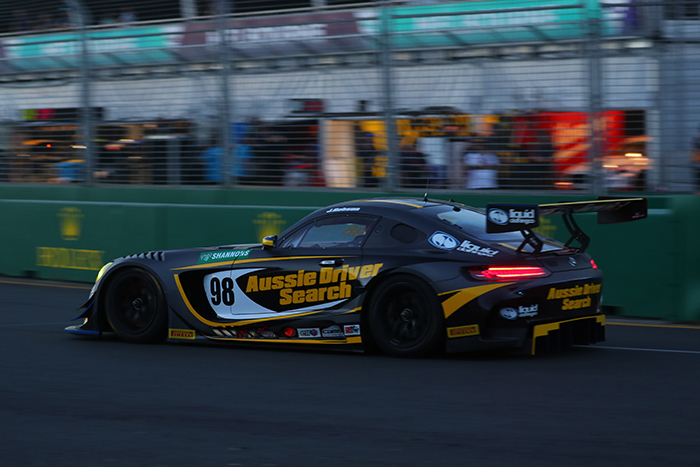 Young blood Jaie Robson has rocketed to the top of the podium in the Australian GT winning the second race at Melbourne’s Albert Park in the Aussie Driver Search Mercedes AMG GTS GT3.

“[The] Australian Grand Prix has been amazing so far! Having only sat in the car this morning [Thursday] with no testing at all, to then qualify p13 in Q1, P3 in Q2 and Race 1 finished 9th and then to win Race 2 WOW!” said Robson on Facebook.

Robson started from the second row of the grid in third and shot past Fraser Ross (McLaren 650S GT3) to take the lead into turn one only to have Ross pass him again in turn two.  Then for the next 8 laps the two battled through every turn, Robson elected to just push Ross into a mistake which didn’t come, so on lap 9 Robson managed to get under Ross over the back of the circuit as they were beginning to have to negotiate around lapped traffic, Robson used this to his advantage and pulled out a 5 second lead by the time the flag fell.

The race was scheduled for a start at 11am but was postponed after a demonstration street car (an Aston Martin – whoops) crashed and heavily damaged the concrete wall, the AGT race was run at 7pm after the Supercars race.  The race was very reminiscent of the Bathurst 12hr race start as it was getting dark quickly!