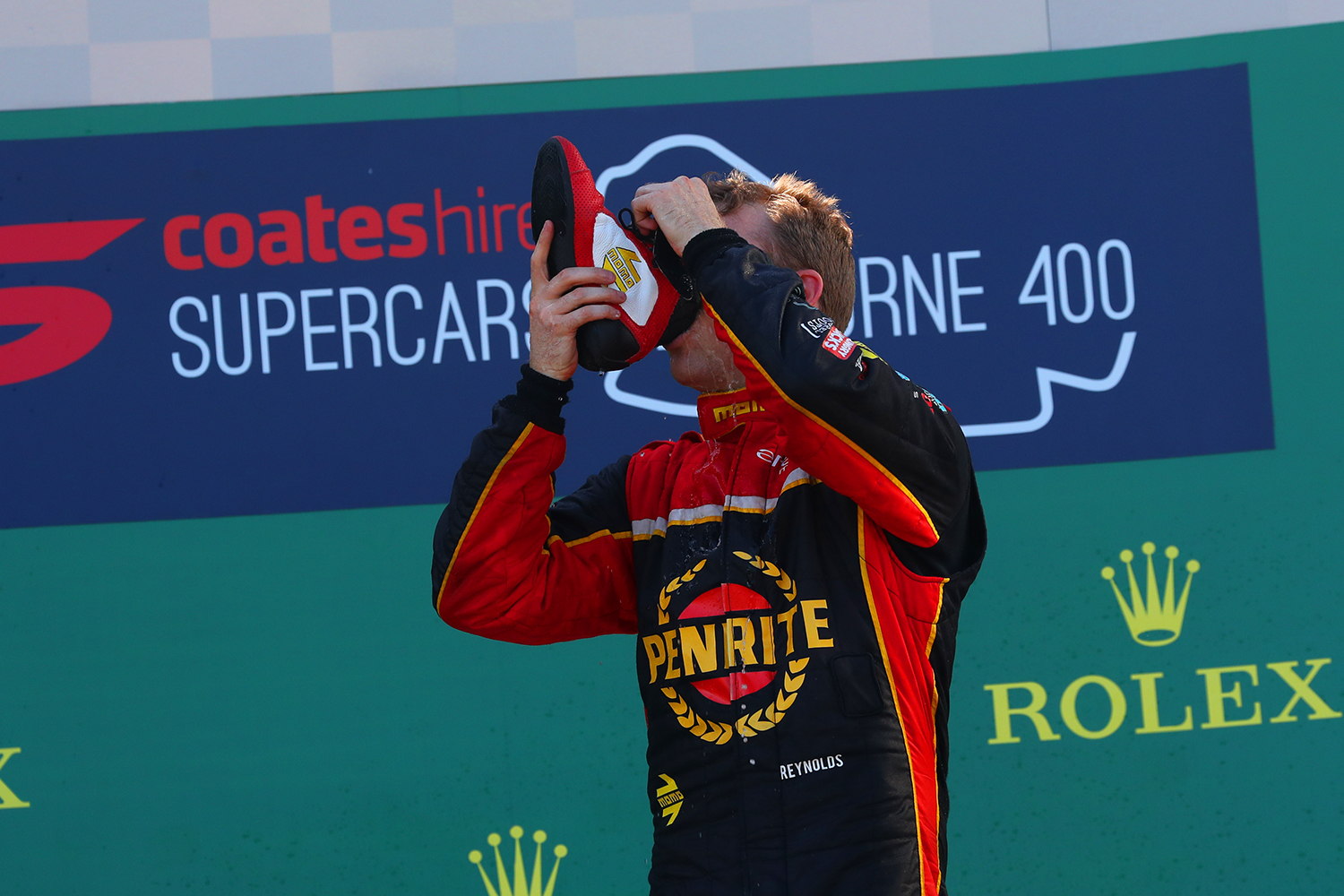 Erebus driver David Reynolds has added his Shoey to a growing list of podiums here the Melbourne Grand Prix today in the Virgin Australia Supercars Championship.

In a class act Reynolds took control of the sixth race for the 2018 season leading all 11 laps, after the race was shortened from 13 laps for the only safety car period of the weekend.  James Golding’s Wilson Security Racing GRM Holden Commodore caught fire down the front straight, he pulled the car up at turn two with the cockpit full of smoke and flames from under the engine.

On the restart Reynolds maintained control of the race again from a fast charging Nick Percat (Tempur Racing) whom was trying to catch and pass Reynolds, however he had 7 times champion Jamie Whincup filling his mirrors.  The later was bitter on himself for the fluffed start “I dumped the clutch” was his comment in the media conference.  Reynolds and Percat had the run on Whincup.  Tickford Racing’s Chaz Mostert was the top performing Ford driver in fourth ahead of Saturday’s Race 5 winner, Scott Pye.

The four races of the Coates Hire Supercars Melbourne 400 all go towards an overall trophy, the Larry Perkins Trophy, with Perkins himself handing it out on the podium, Whincup’s consistency over the four races meant he was awarded the inaugural award.

The Supercar podium was just prior to the Formula One traditional drivers photo, and the podium is above the walkway the F1 drivers were about to come out of, Reynolds after his shoey dropped the Champagne bottle over the edge to a team member to share with the team, unfortunately the bottle slipped from his hands and smashed on the walkway!  A quick dash by officials had to get this cleaned and sorted before the drivers emerged, a fair amount of consternation ensued!  Mark Webber was close by the smashed bottle.

The next event of the championship is the Tyrepower Tasmania SuperSprint at Symmons Plains Raceway on April 6-8.

DUE OUT LATE APRIL 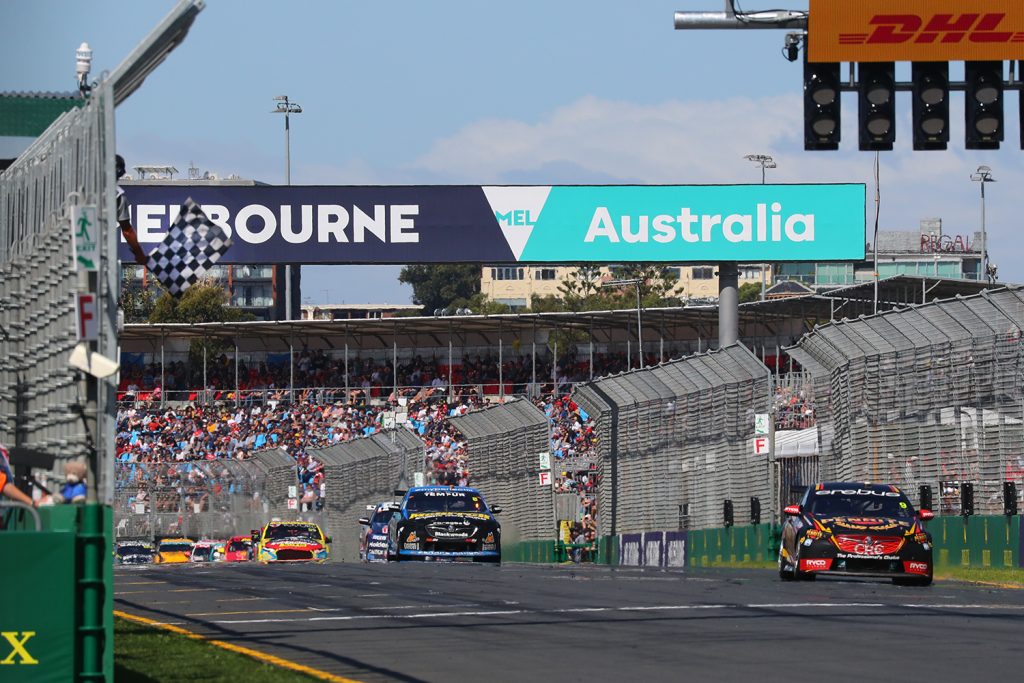 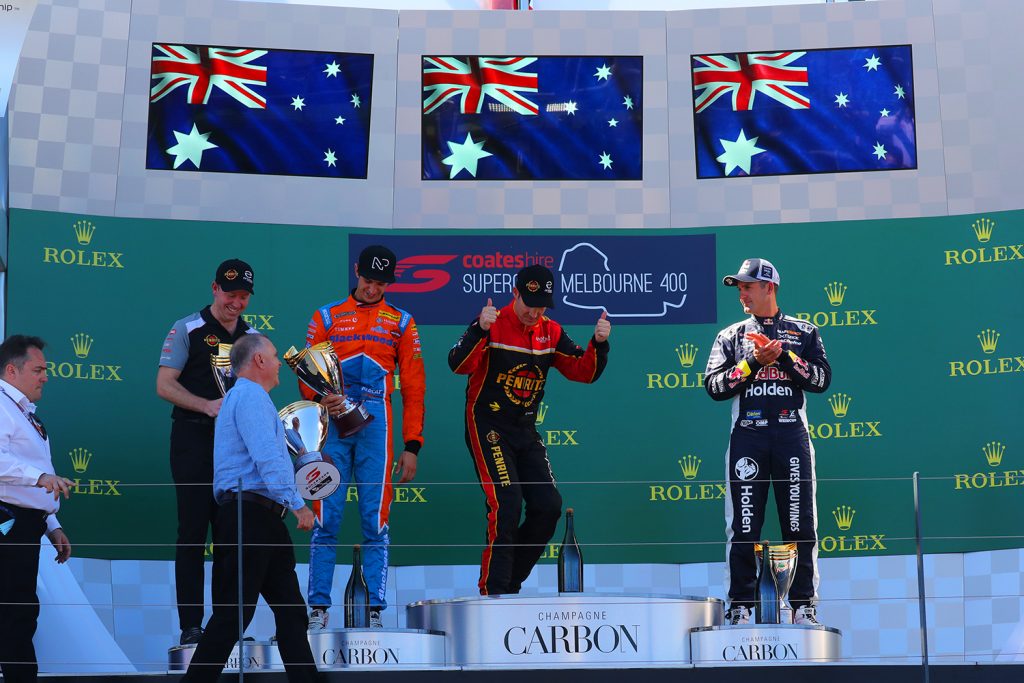 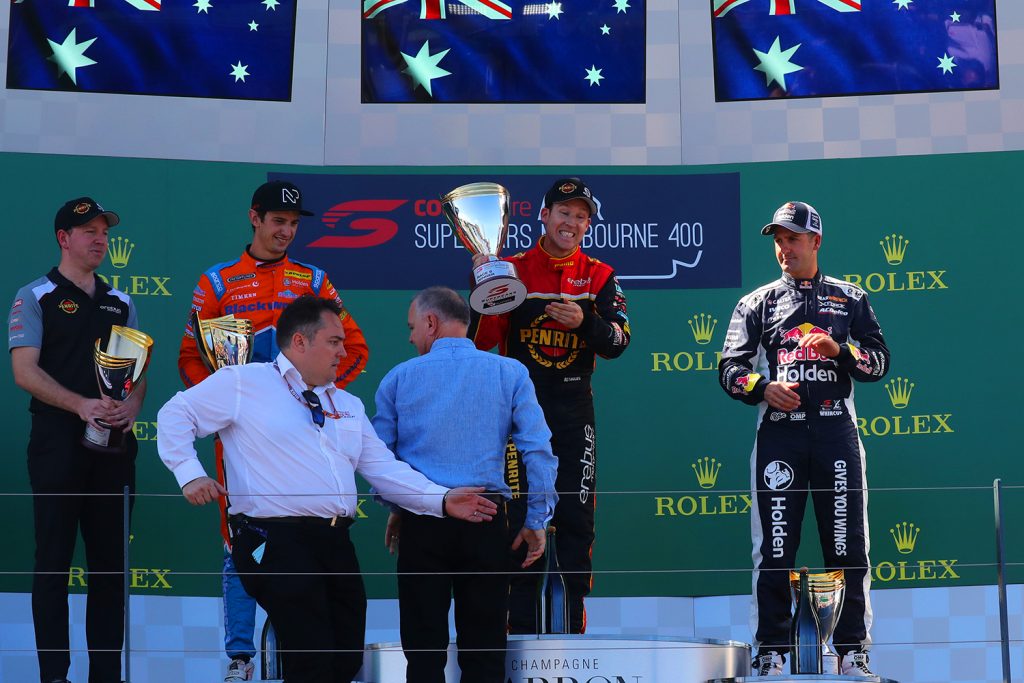 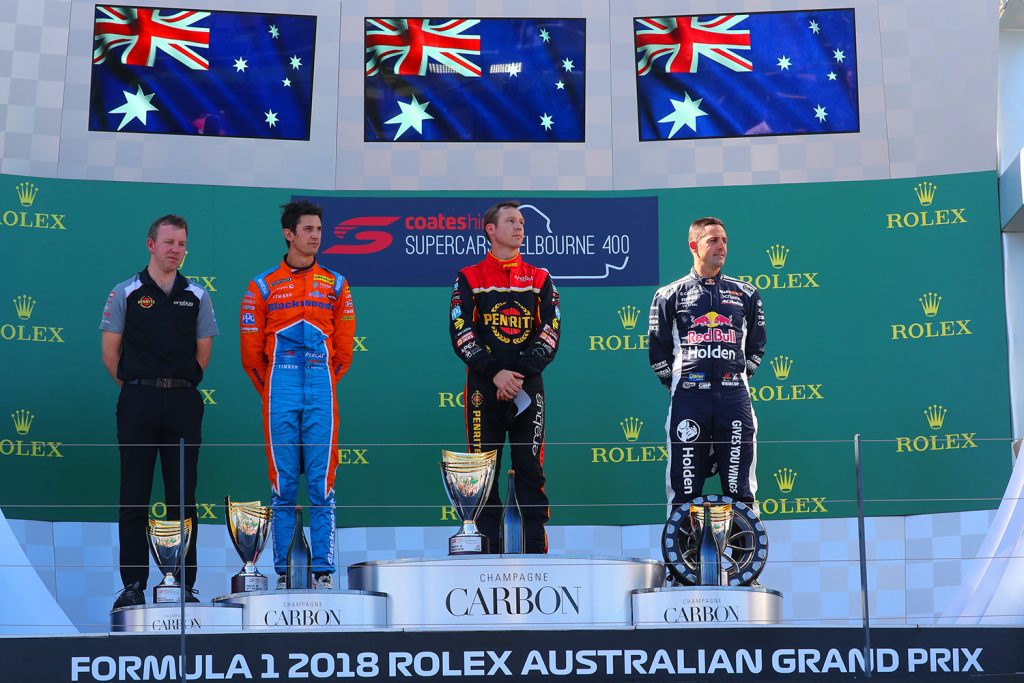 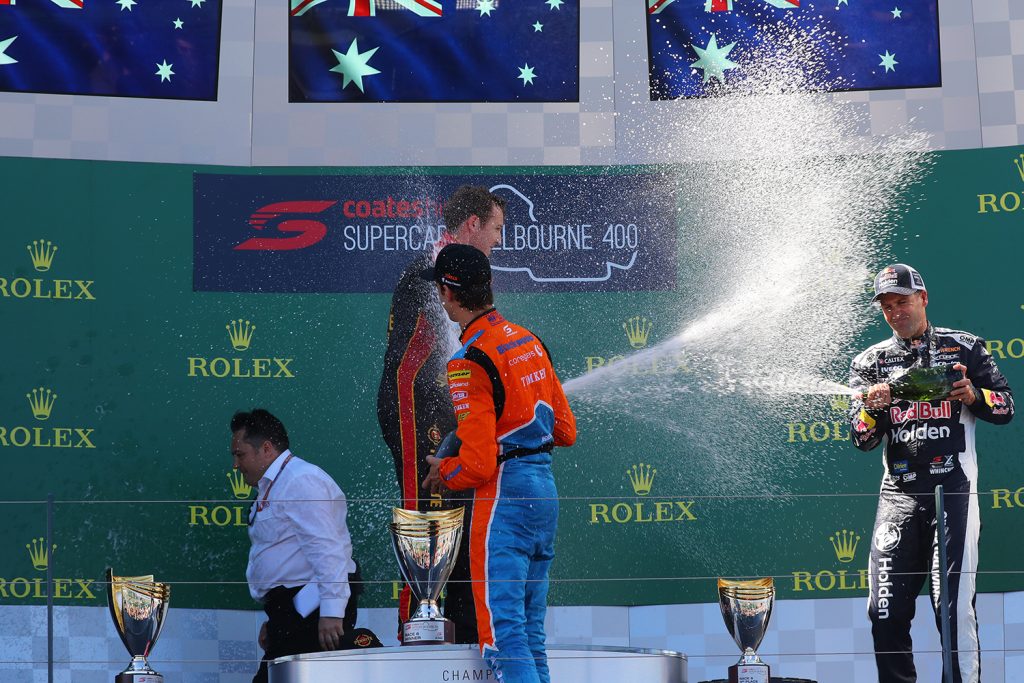 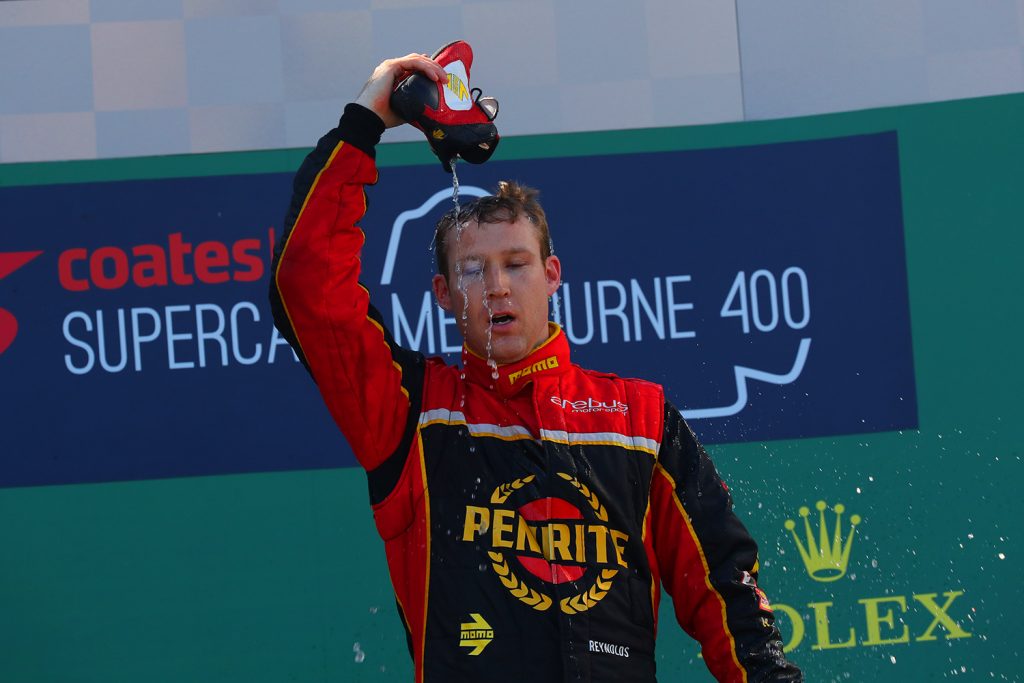 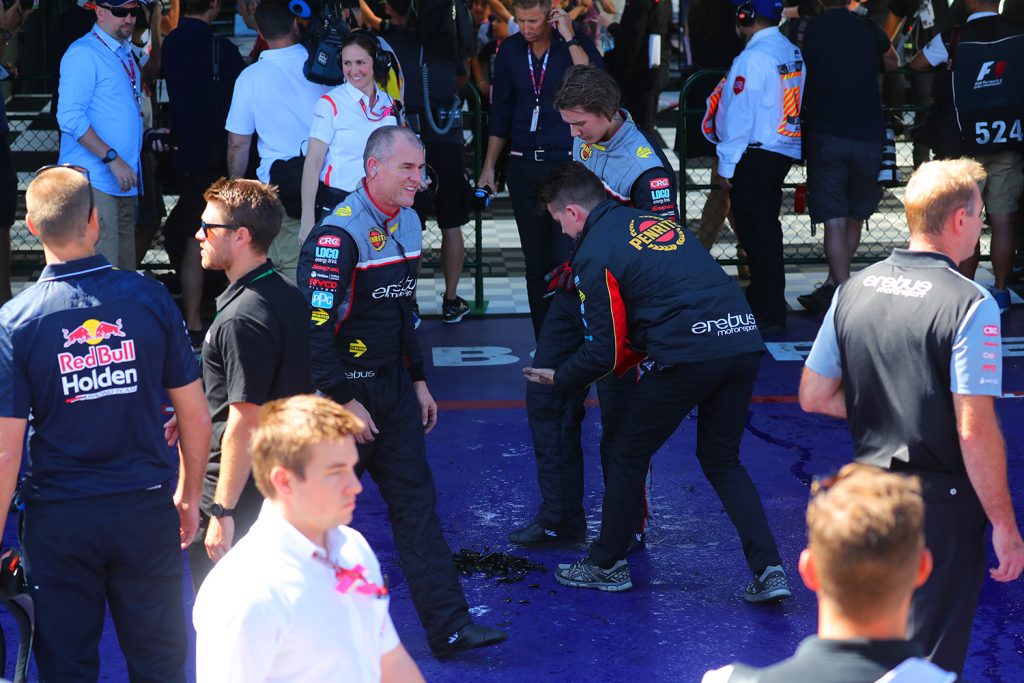 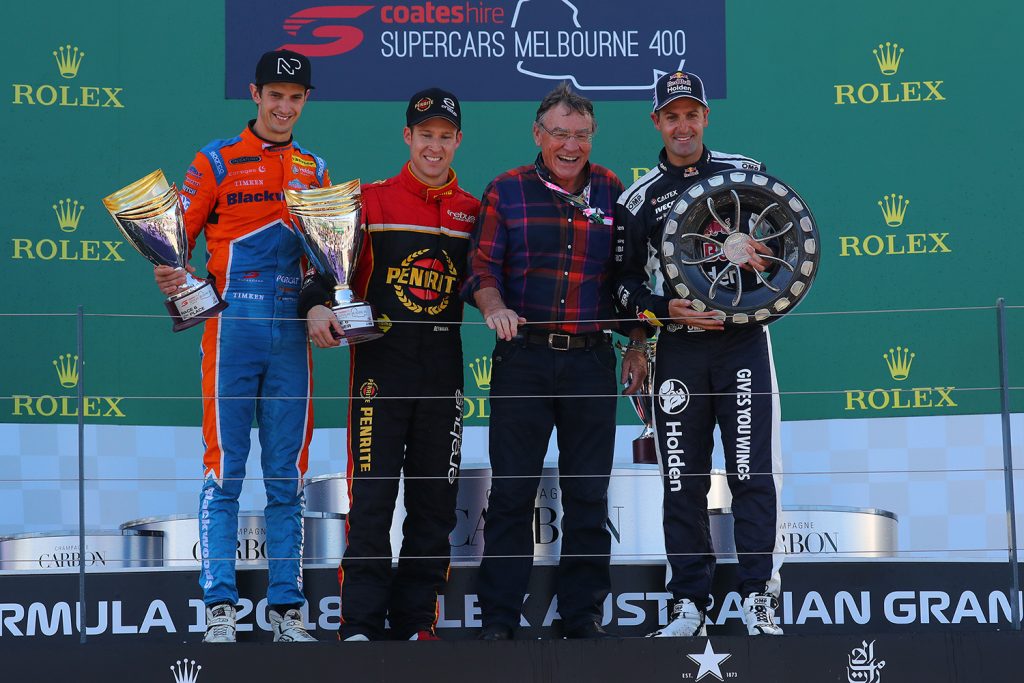