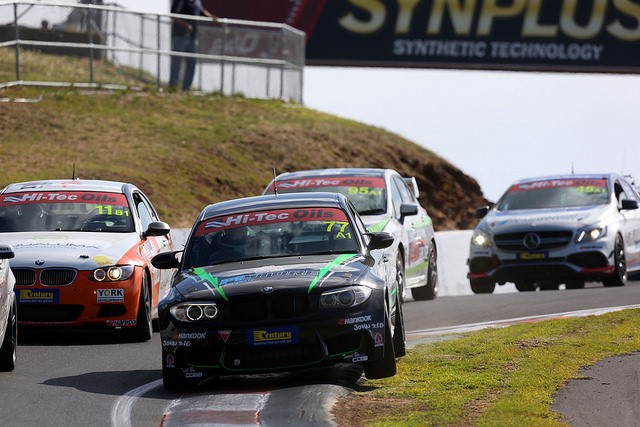 A MAJORITY of the nearly 150 drivers that will tackle the 2018 Hi-Tec Oils Bathurst 6 Hour have been revealed.

The full 62-car entry list showcases a talent-packed field filled throughout each class.

Former production car champ Beric Lynton will debut his brand-new BMW M3 with Orange driver Tim Leahey in the co-pilot seat, while Garth Walden and Craig Baird will return to the wheel of the Transtar / GWR Mercedes A45 AMG.

The pair were in contention for a podium finish in the 2017 race before an enormous fire within sight of the flag ended their day on the start-finish line.

The GWR team will again run a pair of their German hot hatch racers, with Rob Woods and Marcel Zalloua to be joined by current Touring Car Masters champion Steve Johnson in the second A45.

Fans of Aussie V8 muscle won’t be let down either, Jeremy Gray and George Miedecke to fly the Ford flag with their Supercharged FG GT-F Falcon in the top class.

Supercars full-timers Slade and Mostert will be joined by series’ rookie Todd Hazelwood on the Bathurst grid.

The Adelaide driver will join fellow 2016 Class C winner Rob Rubis and Scott Turner in a BMW 135i in class B1; a car that could trouble some of the Class A contenders on the outright leaderboard.

Several class winners will return to defend their victories earned last year, including the Holden Commodore SS of Brian Walden, Michael Auld and Richard Bloomfield; the trio gunning for a third straight victory in Class B2.

The 2018 Hi-Tec Oils Bathurst 6 Hour will be shown live on FOX Sports on Sunday, 1 April.