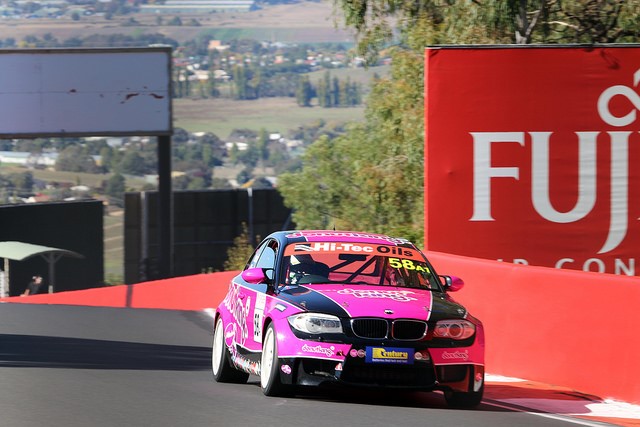 THE FIRST all-international team to enter the Hi-Tec Oils Bathurst 6 Hour will tackle the race this Easter.

RHC Lawrence-Strom, in partnership with MARC Cars Australia, will enter a BMW 1M in the race with drivers Darren Jorgensen, Brett Strom and Cameron Lawrence.
The trio made their Bathurst debut in February’s Bathurst 12 Hour, driving a BMW M4 GT4 to fourth in class – a car that Jorgensen and Lawrence will again drive in the pair of one-hour Production Sports Car support races that also feature on the B6HR program.

However, an expansion of their partnership with Ryan McLeod’s Queensland-based outfit will see the trio drive the teams recently acquired BMW 1M for the six-hour classic as well.
The race will also highlight the return of MARC Cars Australia to their production car roots – the outfit started as a Production Car team in the earlier iterations of the Bathurst 12 Hour before developing their Australian designed MARC Cars endurance racers in-house.

“Ryan (McLeod) and his team at MARC Cars were exceptional to work with at the Bathurst 12 Hour, solidifying a partnership for additional races this season and well into the future,” Jorgensen said.

“I’ve put together a great program with MARC Cars and our drivers, Brett Strom and Cameron Lawrence, and I’m confident that we will have a strong showing at the Bathurst 6 Hour.”
Jorgensen will be joined by his regular co-drivers in the ex-Tony Alford BMW.

“Competing at Mount Panorama Circuit for the Bathurst 12 Hour was one of my racing dreams but being able to go back and compete again in the same year is unbelievable,” Strom explained.
“We’ll be competing at the Bathurst 6 Hour in a BMW 1M which is perfect as I built and run this same platform in the US with Daren and have been working closely with MARC Cars on getting it prepped for the event.

“I’m super confident in the equipment and Ryan’s team and looking forward to competing in my first Bathurst 6 Hour.” Cameron Lawrence said he was similarly excited about returning to Mount Panorama.

“Mount Panorama is unlike any other track I’ve ever competed at. Everyone dreams of going to Bathurst and after competing in the 12 Hour, it’s unlike anything I imagined,” he said.
“I’m thrilled to go back to Bathurst for the 6 Hour and work with MARC Cars. MARC Cars brings a wealth of knowledge from a decade of competition at Mount Panorama and I’m looking forward to getting back to Bathurst and picking up where we left off.”

McLeod said the return to Production Car racing at the Hi-Tec Oils Bathurst 6 Hour was a great nod to both his own personal history in the sport as well as that of his team.

“It’s great to be back at Bathurst and especially in Production Cars,” McLeod said.

“It’s basically where my career began back at the first 12-hour race in 1991.

“I have driven in those races personally as well as run cars in the 12-Hour and the GTP 3 hour races at Bathurst. Its great to be joining the six-hour field with the RHC Lawrence-Strom guys.
“We know the car is capable and we’re looking forward to having a good weekend.”

The No.5 BMW 1M and No.13 BMW M4 GT4 will be supported by MARC Cars and and by partners and sponsors, including: JET Environmental, JET Battery Services, Strom Motorsports, Feal Suspension, Upper Ninety and Apex SportsCar Academy.