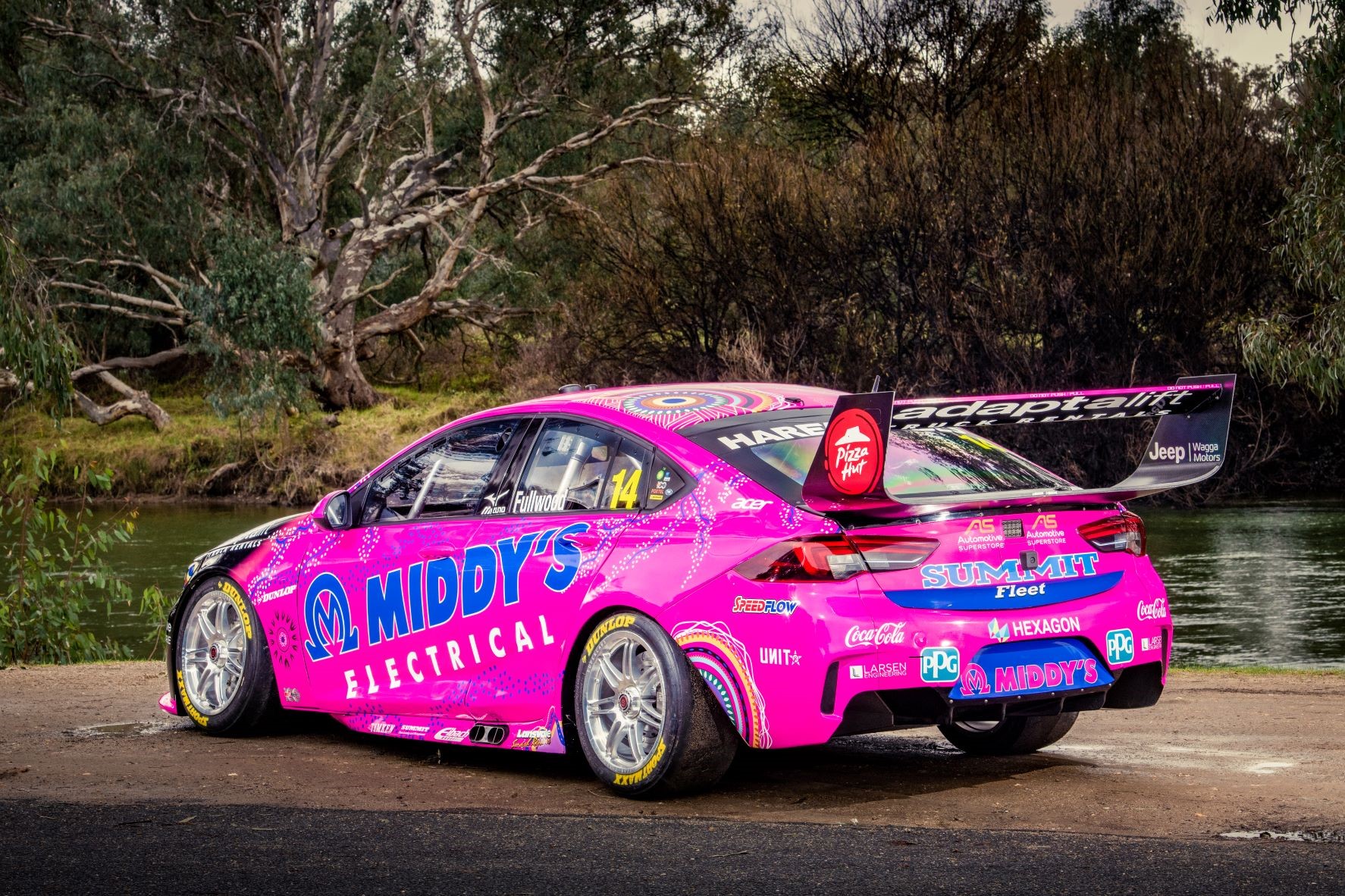 Middy’s Racing and BJR are excited to unveil the Indigenous livery design for next weekend’s Darwin Triple Crown for the Prince of Darwin himself: Bryce Fullwood.

Darwin’s hometown hero will run the show stopping Middy’s pink that has fast become a standout in the Supercars field – but this time with a very distinct twist.

The Hidden Valley event has been designated as the official Indigenous round of the Supercars Championship for 2022 and all teams have engaged with artists to design liveries celebrating the culture of Australia’s First Nation People’s in preparation for the event.

BJR worked with Jedess Hudson, a young emerging Indigenous Artist from Cairns in Far North Queensland on the design for the Middy’s Racing Supercar.

Middy’s Electrical is Australia’s largest family owned and independent electrical wholesaler and Jedess took inspiration from Middy’s longevity in the electrical industry when she created the artwork titled Light the Way. 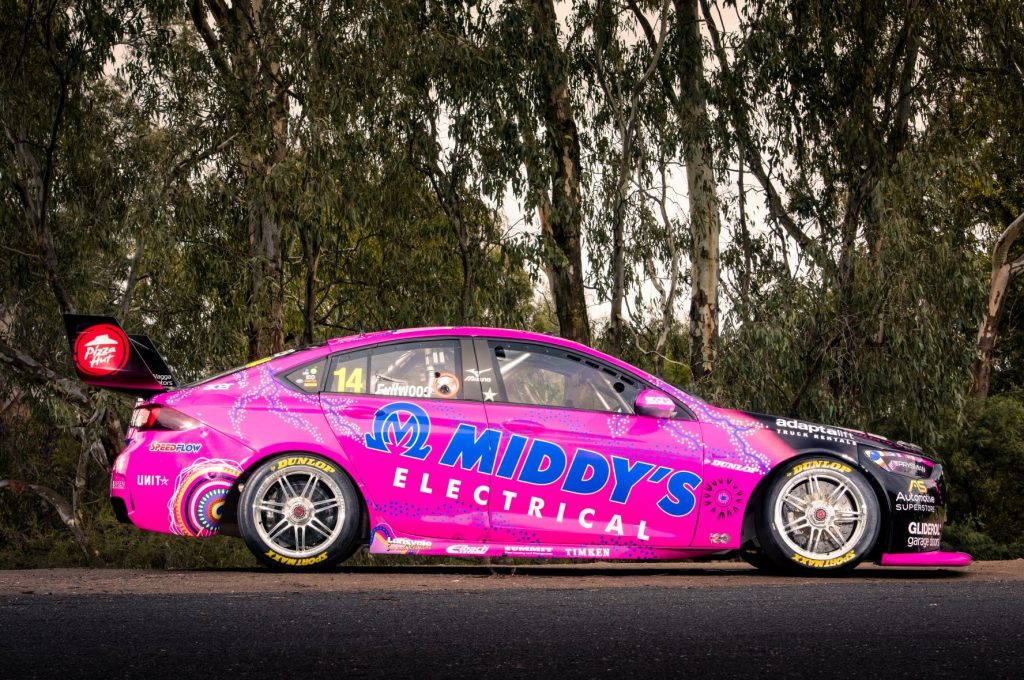 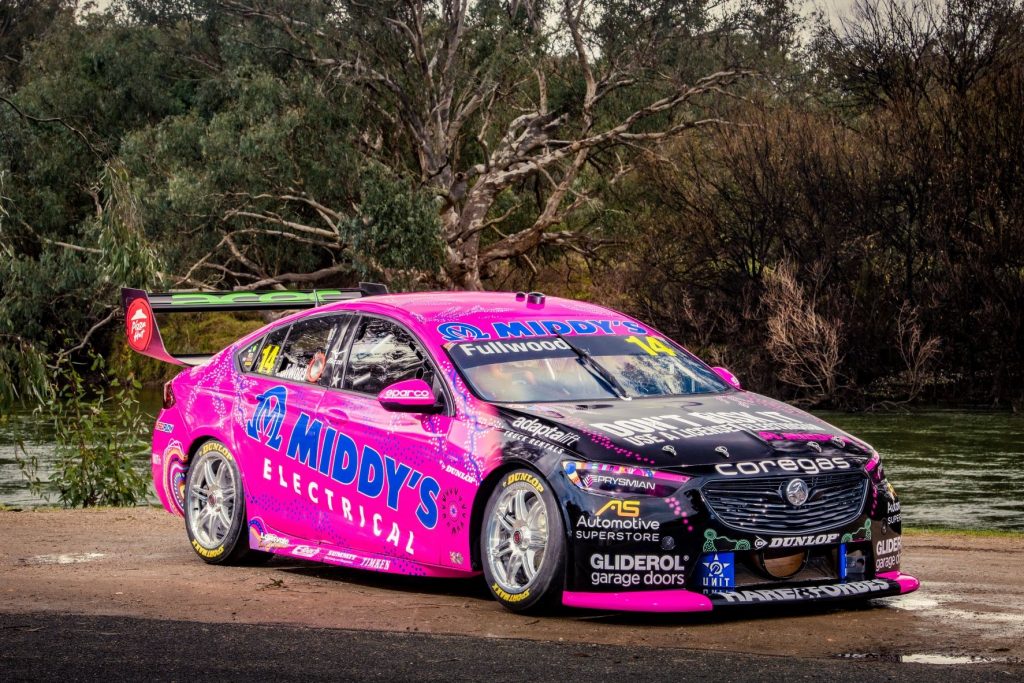 “Across our land, we see various weather patterns that signal the changing of seasons, mainly through the hot and humid summer months,” Jedess said.

“Bryce was born and raised in Darwin and Northern Australia which is known for its distinct wet and dry seasons and various types of lightning that can occur. Dry lightning, lightning to fire, and lightning to storms.

“For First People, we recognise the original form of energy transference was lightning and with Middy’s being such a beacon in the Australian electrical industry, it seemed the perfect juxtaposition of elements to inspire the design.”

Middy’s Directors’ Anton and Nicholas Middendorp commented that the Middy’s team was delighted with how the car had been prepared and excitement was building to see Fullwood hit the track in Darwin.

“Ms Hudson’s thought behind the design is a delight and we’re very much looking forward to welcoming the Middy’s and BJR team to Darwin in what should be a very special round supporting Bryce racing in his hometown.”

“The car looks amazing; the Middy’s pink is always impossible to miss on the track and next weekend we’ll be bringing something even more special to celebrate the Supercars Indigenous Round and Bryce’s home race.”

Team Owner Brad Jones said the #14 car visited the Mungabareena Reserve in Albury to be photographed after being wrapped in its special livery. Mungabareena means a ‘special meeting place’ in Wiradjuri language and was where local Aboriginal groups traditionally met, before heading to Mount Bogong in the Alpine National Park.

Once there, the men would catch protein-rich Bogong moths to eat and return to Mungabareena to feast, while the women would stay on the plains to pick grasses and make damper.

Bryce spent the first six months of 2022 in Albury getting to know BJR and the region. BJR has strong ties to the area and there’s also a little irony in the Bogong moth being so prevalent and being attracted to light.

The amazing Indigenous livery is also brought to life by 3M Films and PPG.

About Jedess Hudson:
Jedess Hudson is a young emerging Indigenous Artist from Cairns in Far North Queensland. She is a descendant of the Ewamian and Western Yalanji people of Northern Queensland. Jedess seeks to express her Aboriginality through her art, combining the traditional stories of her ancestors with contemporary artistic styles. The beautiful country and landscape of Australia provide her with an infinite source of inspiration. On her creative journey Jedess draws deeply from her traditional homelands. The land, seasons, bush tucker, flora and fauna are aspects that are inspired and incorporated into her art practice.

Growing up Jedess was taught to be aware of her surroundings especially in nature and analyse the things that make up our diverse landscape. The daughter of renowned North Queensland artist and musician David Hudson, Jedess and David have recently collaborated and exhibited Ancient Voices – New Beginnings – a diverse mix of David’s traditional storytelling style with Jedess’ contemporary perspective.