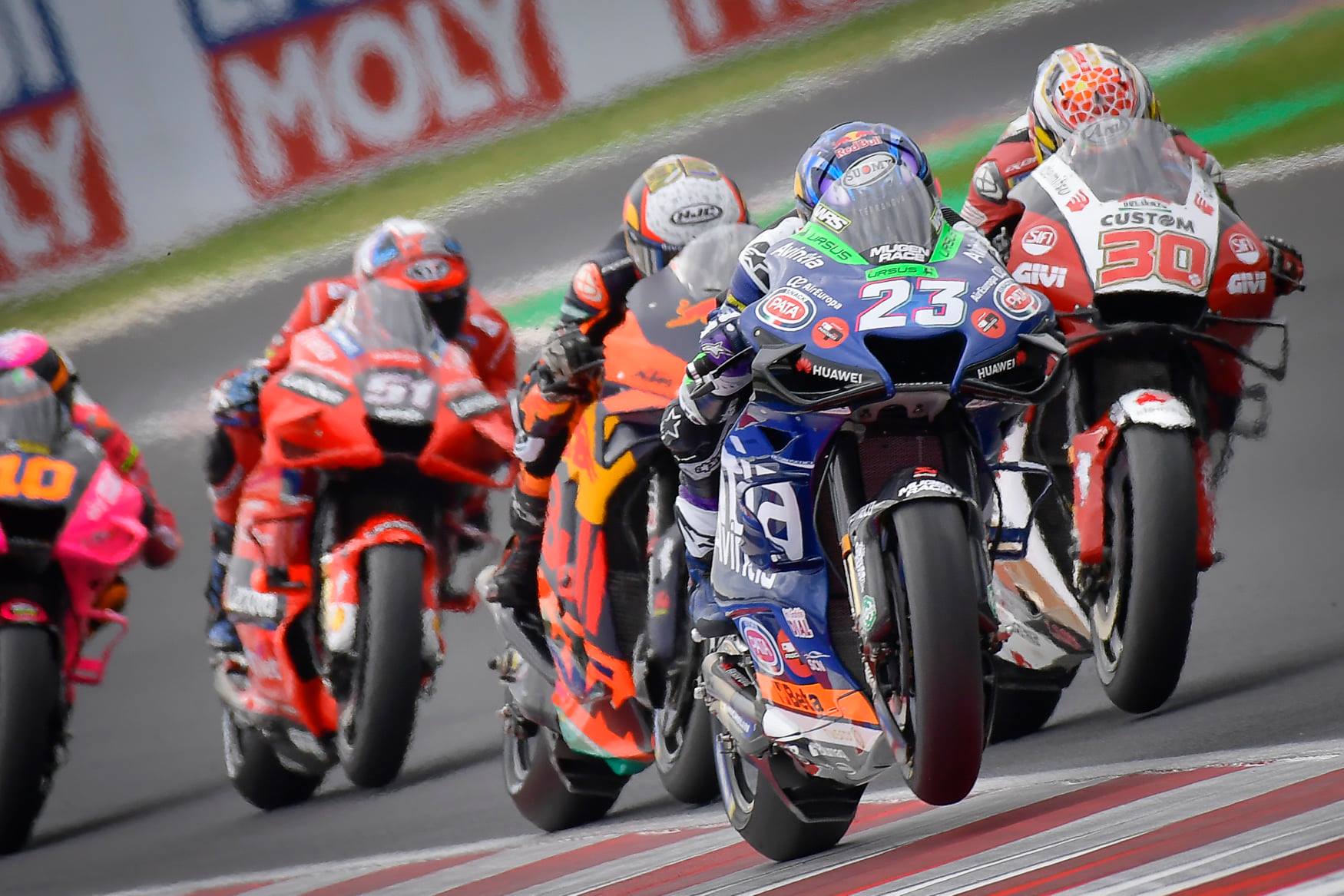 Having waited three years for his maiden MotoGP™ win, Francesco Bagnaia now has two in quick succession after he held off a hard charging Fabio Quartararo (Monster Energy Yamaha MotoGP) in another last lap nail biter at the Octo Grand Prix of San Marino. The Ducati Lenovo rider held his nerve for a second week running to take victory in Misano, while a spectacular effort from Enea Bastianini (Avintia Esponsorama) saw the rookie take a first premier class podium.

Poleman Pecco wasn’t waiting around once it was lights out, with the Italian taking the holeshot ahead of teammate Jack Miller (Ducati Lenovo Team), who had executed a brilliant opening corner move to get ahead of Quartararo into P2. As per usual, it was impossible to take your eyes off the opening lap action as riders bustled past one another, the pick of the bunch was Jorge Martin (Pramac Racing) standing up Pol Espargaro (Repsol Honda Team) coming into Turn 8, as the rookie moved into the top five. By the end of the first lap, Bagnaia had opened up an impressive one second lead over Miller in second, with Quartararo and Marc Marquez (Repsol Honda Team) not far behind the Aussie.

At their home track, the Ducati one-two began to put some space between themselves and the Championship leader on the next lap, while they got a helping hand from their satellite counterpart Martin as the Bologna bullets looked to bully the Championship leader. The rookie had moved past Marquez and was looking to get himself in among the podium places on the front straight, but Quartararo struck back immediately, taking the inside line at Turn 4. The battle for third didn’t end there, with Martin and Quartararo exchanging more overtakes in the next couple corners, but hopes that this would turn into a race long fight were quickly extinguished as Martin lost the front at Turn 14, ending his podium chances.

While that battle raged on, Bagnaia’s lead at the front had extended to over 1.5 seconds with 25 laps to go.

Outside the podium places, there were good starts for Aleix Espargaro (Aprilia Racing Team Gresini) and both Repsol Hondas, but they would soon be looking over their shoulders as a rapid Bastianini was eating up the ground on the top six. By the fifth lap, both Pol and Aleix Espargaro were powerless to resist as the two-year-old GP-19 came charging past them, while it didn’t take him long to dispose of eight-time World Champion Marquez as he set his sights on the podium.

Up ahead, Miller was making headway into his teammate’s lead, cutting two-tenths off before a big error undone all his hard work. Coming into Turn 13, the Aussie ran it way wide and off the track, with Quartararo following, to hand Bagnaia a 2.45s lead which was begin to look unassailable. It was to get worse for Miller, as just past the halfway point, Quartararo fired up the inside of him at Turn 6. The number 43 then received a track limits warning, but that was the least of his problems with the race’s fastest rider Bastinanini hot on his heels. It looked just a matter of time before the Avintia rider moved past his factory counterpart, and so it proved, taking P3 at Turn 13 on the 19th lap.

Alex Rins was riding well as the Suzuki man fought his way into the top five, but any lingering hopes he had of taking a podium were dashed as crashed out of contention at Turn 1, joining Iker Lecuona in the pits after the Tech3 rider had also crashed earlier on.

At the front, things were beginning to spice up nicely, with Quartararo’s decision to choose a medium soft tyre beginning to pay dividends, as he cut the lead to 1.5s with. That gap continued to close as the laps ticked down until there was just two-tenths separating the pair as we came into the final showdown. It was set up for another ding dong battle one week from an Aragon thriller, but unlike last time out, Quartararo couldn’t get close enough to make the killer move required, and Bagnaia held on for another memorable victory, with Bastianini crossing in a comfortable third in an unforgettable day for the Italian.

Bagnaia has now collected 50 points from his last two races, meaning there are now 48 points between him and Quartararo in the title race. Joan Mir crossed the line in fifth, but was demoted one position for exceeding track limits on the final lap, meaning he finished behind Marquez and Miller. The Mallorcan’s slim hopes of retaining the title now look well and truly over after today.

In the battle of the siblings, Pol edged out elder brother Aleix Espargaro to P7, while Brad Binder (Red Bull KTM Factory Racing) once again showcased his skills on a Sunday to finish in P9 after starting 17th on the grid. Takaaki Nakagami (LCR Honda Idemitsu) rounds out the top 10 from the Grand Prix of San Marino. 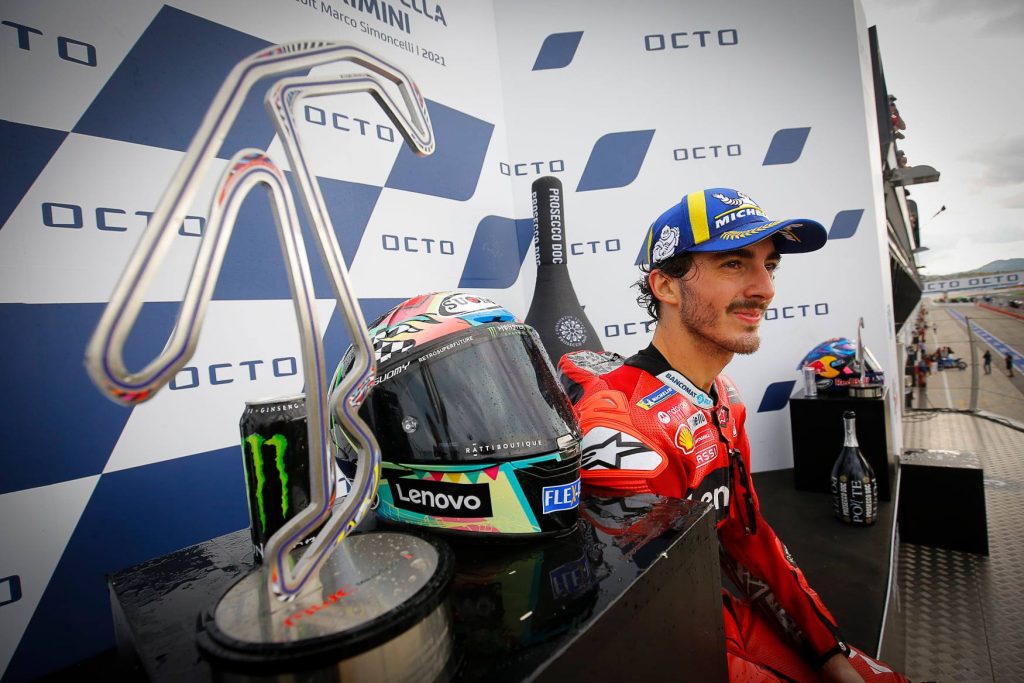